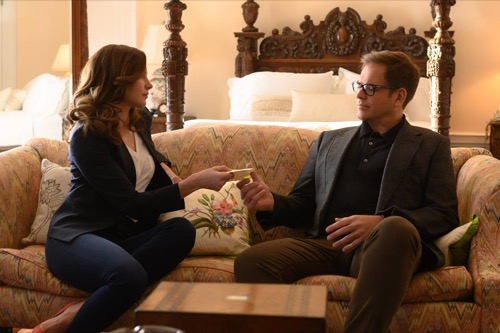 Tonight on CBS their drama Bull inspired by Dr. Phil McGraw airs with an all-new Monday, April 1, 2019, episode and we have your Bull recap below.  On tonight’s Bull season 3 episode 18 called, “Don’t Say a Word,”  as per the CBS synopsis, “Bull’s romantic rival, Diana Lindsay, jeopardizes her career when she secretly has Bull come to Texas to assist a couple fighting against her former client for custody of their grandchildren.”

A woman drives fast through the night. She pulls up to a house and goes in. She yells at what appears to be her ex-husband. He has been drinking. He promised he wouldn’t. He tells her to leave as he gets in her face. She knees him and runs off to get her girls. He runs after her, shooting her in the back when she is on the stairs.

In court, the man takes the stand and tells the jury he shot what he thought was an intruder. Later, the jury finds him innocent. His defender Diana hugs him with a look of disgust in her eyes. The man heads to see his exes parents. He will take his girls back now. The couple refuses. They know he killed their daughter.

Bull tries to get a table at a swanky restaurant with some charm but the host isn’t having it. He heads to the drive-through. He gets a call from Diana. He loses her. He calls her back, she wants to know if he is busy this weekend. He wants to know why she hasn’t answered his calls. She gives him a quick run down to meet her in Katy, Texas. He cannot believe she calls with plans like this after giving him the cold shoulder.

Bull arrives. Diana tells him about the grandparents and her client. She wants him to represent the grandparents. If he wins, she will think about forgiving him. She leaves. Bull doesn’t know what just happened.

Bull meets with the grandparents and the daughters the next day. They tell him that their former son in law was a drinker and a charmer.

Bull calls the team to meet with him in Texas. Marissa tells him she cannot, she has a doctor’s appointment she cannot miss. Taylor and Benny will go.

Benny, Bull, and Taylor all meet with the son-in-law Derek and his lawyer, who tells them they cannot mention anything about the murder trial.

In court, the grandfather takes the stand and details how Derek was a drinker. Derek’s lawyer drops the bomb that the grandfather isn’t as moral as he sounds. He had an affair 45 years ago and got the woman pregnant. He never did help raise the baby. The grandmother is beside herself as is Bull.

In a private room, the grandparents argue while Bull sits in listening to the man’s story about how he didn’t cheat. It was a woman he was with before his wife. She didn’t want to marry him so she went off and raised the baby with the man she was in love with. The grandparents start fighting. The kids run in upset.

At court the next day Derek takes the stand. He admits he let his drinking get out of control. Later, Taylor digs up some important information about a trip Derek and his wife went on. She went to the hospital with a broken cheek. Benny asks Derek about it on the stand. Derek goes white. Bull heads to the hotel to secretly meet Diana. He tells her the good news about their day. They both get a text to meet at the judge’s chambers tomorrow. They both get nervous.

The next day in the chambers Diana is accused of being involved with the custody case. Diana admits she called Bull to take the case but she didn’t share anything about Amanda’s broken cheek with him. A mistrial is called. Bull’s clients are angry and fire him while Derek’s fires his attorney.

Back at the hotel. Taylor shows Bull some grocery store footage of Amanda the night she was shot. Amanda takes a call that must have come from her daughter. They need to talk to her.

Bull heads to the house and talks to the daughter. After some sharing, the daughter finally tells Bull that daddy shot mommy. Daddy told her not to tell or she would never see her sister again.

Benny and Bull heads to the judge. They share what they know. Derek is arrested for witness tampering. Bull heads to meet Diana. He tells her he defended her to the judge and promised to give his son an internship. He invites her to New York. She smiles and accepts!