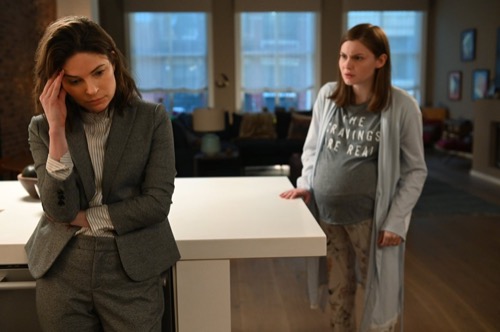 Tonight on CBS their drama Bull inspired by Dr. Phil McGraw airs with an all-new Monday, May 6, 2019, episode and we have your Bull recap below.  On tonight’s Bull season 3 episode 21 called, “When the Rains Came,”  as per the CBS synopsis, “Bull helps mount a defense for Taylor’s brother-in-law, a prison guard charged with manslaughter for the drowning deaths of two inmates in the middle of a hurricane; Bull aims to convince the jury that his client tried to prevent a “great harm.”

Blackwood Correctional Facility – Inmates watch as a category 4 hurricane is announced on the news. A mandatory evacuation is declared. Seconds later the power goes out. The inmates are called back to their cell. The landlines go down. The COs cannot get in touch with the warden. Three COs discover C block is empty. They decide they are going to leave too. In one cell several prisoners get on the highest bunk as water rushes in.

Bull comes into the office. Taylor tells him how her brother in law Ralph was one of the COs who left the prison at Blackwater. He is being charged with two counts of manslaughter after following the devastating the storm. He left to go home because a tree fell on his house. He had the only family car and his wife is pregnant. Bull wants to help. The next day he goes with Benny to Ralph’s bail hearing. They get him out on bail.

At the office, Benny and Bull meet with Ralph. He explains his side of the story and how he thought he was leaving the prison for a bit to help his family and he would return. But when he tried to get back the roads were closed and the water was too high. He thought the prisoners were going to be fine after all the prison has all new pumps and a roof. His house doesn’t. This gives Bull an idea.

In court, only a small amount of jurors show up to be selected for the pool. The proceedings begin with one prisoner sharing how his cellmate drowned. He found him face down in the water. The prisoner talks about how she heard Ralph on the phone saying he needed to get out of there before the place was under water. Marissa speaks to Bull – the jurors are in the red.

On recess, Ralph tells Bull and Benny that comment was a lie. Back in court, Benny calls Ralph’s pregnant wife to the stand. She is emotional about being scared that night.

Taylor finds weird amounts of money being funneled into her sister and Ralph’s bank account. She also notices the time her sister checked into the hotel was the sometimes Ralph was home. She didn’t need Ralph to help her, she was already safe. Taylor wakes her sister to ask her what the hell is going on. Her sister admits she was already safe. She needed Ralph to grab a duffel bag filled with 50k out of their garage. She also admits to extra money being deposited into their account. She knows it is there and that it has something to do with the prison but not the details of it. Taylor becomes angry. Her sister lied on the stand and to all of them.

Taylor tells Benny and Bull what she has learned. They confront Ralph. He admits he has been selling cell phones to inmates.

Bull and Benny have a plan. Ralph takes the stand the next day and shares that he started around $11.oo an hour and now makes $18. None of the administration staff was there that night. Nor was the warden. But somehow he ended up in charge. He admits he went home to save something but it wasn’t his wife. He chokes up on the stand explaining that he was going to go back and did but the road was blocked.

On recess, Bull pulls the prosecutor aside and lays it out for him. He isn’t going to win. If it is a mistrial they have to do this all over again an on the tax payer’s dime.

Bull pulls Taylor, Ralph, and his wife aside. He shares that he made a deal with the DEA and he did it all for Taylor. Ralph and his wife need to pay $25k to each family of the dead prisoners and then they can get on with their lives and never make a mistake like this again. They agree. Taylor pulls Bull aside and thanks to him.