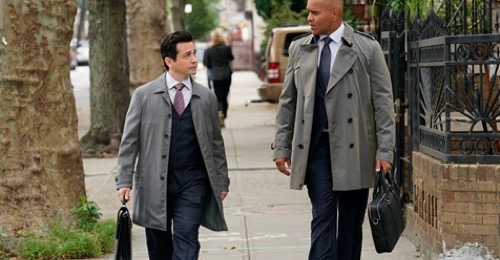 Tonight on CBS their drama Bull inspired by Dr. Phil McGraw airs with an all-new Monday, October 7, 2019, episode and we have your Bull recap below.  On tonight’s Bull season 4 episode 3 called, “Rectify,” as per the CBS synopsis, “Benny’s previous career with the District Attorney’s office comes into focus when Chunk, working with his law professor’s legal clinic, aims to get a new trial for Eddie Mitchell.

Eddie is a man he believes was wrongfully convicted of triple homicide by a prosecution team that included Benny.”

Back in 2002 – Several drug dealers get into an altercation in a laundry mat over whose territory it is to be selling. The next day, the police look over two bodies, one of an innocent woman expecting a baby and a 24-year-old by the last name of Lott. They talk about another male at the scene, Eddie Mitchell.

Present Day – Chunk meets with Mitchell in prison. Chunk explains that he is a law student who works under a lawyer. He thinks they can get him a new trial. Mitchell cries. He explains that a witness lied, pinning him for the murders in a laundry mat. The witness was a prostitute named Heather Bent. The funny thing is – he was talking to another prison who also shared his story. He was pinned for a murder and a prostitute named Heather Bent testified against him.

Chunk takes the case to Benny and tells him all about it. Bent is dead now. Chunk tells him the name of the prisoner. Benny knows Eddie Mitchell, it was his case 17 years ago and he knows Eddie is guilty.

Later, at 2 a.m. Benny meets up with an old colleague, Valerie, who also worked Eddie’s case. Benny has questions that he needs answers to. Valerie tells him to relax, no-one will remember he worked the case and its Eddie’s word against her’s no matter what she had Bent say. This doesn’t sit well with Benny.

Marissa is sitting in therapy. She is upset she lied to her husband and didn’t tell him his sperm was the reason they can’t have a baby. She cries. Now he seems like he hates her, he doesn’t touch her.

Benny shows up at Chunk’s. He tells him what he learned from Valerie. They head to see Bull. He thinks they are crazy but he will let them take it on. They head to meet Eddie in prison. He doesn’t remember Benny. Benny wants to make it right. He heads to speak in front of a judge who agrees to rehear the case.

Marissa and Danny find other witnesses they can call to the stand. In court, Benny cross-examines one of the men who always bought from Lott, the man Eddie is said to have killed.

Benny comes face to face with the sister of the pregnant woman who was killed 17 years ago. She is angry at Benny. Back then he thought Eddie killed her sister and now he brings them back and tells them he was wrong. She walks away.

Danny thinks she has found the man who may have killed Lott, but the man is dead. The ladies get together and start to run through the man’s height vs. Eddie’s and the blood splatter at the scene. They explain it all to Benny, Bull, and Chunk. It looks like the woman may have been the primary person who the murderer was after and Eddie had no motive to kill her.

Benny goes to see the woman’s sister. Her husband answers the door and sends Benny away. Benny gets to thinking. The next day in court, Benny accuses the husband of having an affair with his sister in law. She was carrying his baby. He swears he didn’t kill her. He loved her.

Benny asks the sister to come up to the stand. He now knows she killed her sister because she found out about her husband and the affair, as well as the baby, so she shot her sister dead. The sister breaks down and confesses.

Eddie goes free. Benny is sorry for costing him 17 years.