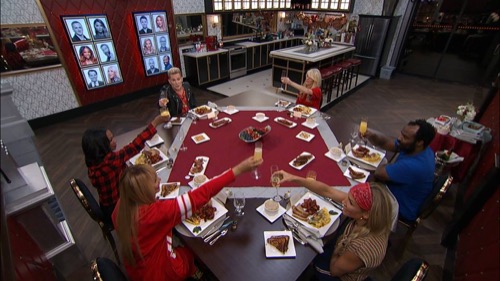 Tonight on CBS Celebrity Big Brother US 2019 airs with an all-new Thursday, February 13, 2019, episode and we have your Celebrity Big Brother US  2019 recap below! On tonights CBBUS2 season 2 episode 13 as per the CBS synopsis, “Tonight on Big Brother we will begin with the completion of the HoH competition.  The New HoH will have a place in the final 4 plus make the last nominations.  At the end of the evening, we will learn which Celeb wins the $250,000.”

So make sure to visit Celeb Dirty Laundry for our Celebrity Big Brother US recap between 9 PM and 11 PM ET.  While you wait for our recap make sure to check out all our CBBUS recaps, videos, news, spoilers & more, right here!

On tonight’s episode, we continue where we left off in the last episode, with the HoH competition. Kandi is tired of being on the block and is determined to win, but this competition is tough; its anybody’s game at this stage. Dina is eliminated and Lolo couldn’t be happier. So far it is down to Tamar and Ricky, if they both can keep it up, one of them will be the winners. It is Ricky who wins, he is going to the final four. Tamar says she is happy he won, I don’t know who she thinks she is fooling.

Time for the Nominations. Ricky’s first nomination is Dina, his second is Kandi. Dina says they are both the best players because that is who you would want to get rid of at this point.

Tamar and Ricky have final two deal, he tells her that if Dina or Kandi win POV, Lolo will have to go up and Tamar has no problem with that.

Time for the Veto competition, this one is called Veto Heist. Houseguests have to retrieve certain items from the BB museum, sounds easy, but they have to dodge lasers and if they trip the alarm they have to run back to the security desk, hit the buzzer and reset. The houseguest with the lowest time to retrieve all items. will win the POV. The times are Dina 17:34, Tamar 13:22, Kandi 9:53, Ricky 9:21 and Lolo 5:08. Lolo has won the POV, it secures her safety and ensures that she will be competing in the final four.

Lolo has an idea, use the Veto and save Dina, put Tamar up as a pawn. Tamar freaks out! No way does she want anything to do with this.

Time for the Veto meeting. Lolo decides not to use the POV. Tamar is thrilled, Kandi doesn’t look impressed. Using the Veto just wasn’t worth Lolo getting Tamar upset. Meanwhile, Tamar is thrilled and plans on voting Dina out of the house.

Anthony is sitting down with Julie, she asks him how hard it was to be in the house with not being able to compete because he was only there for six days. Anthony says it wasn’t that hard, he just played slow. Julie asks him what he thinks about the houseguests, he says Ricky is like an assassin, Tamar is so out there and fun to watch, Lolo is a great competitor and he loves her emotion, Kandi is the smartest person in the house and he knew she would be in the final five. Julie then asks a Donald Trump question, does he think Donald will survive his first term as president. Anthony says yes he does, he is a good guy and he would like to see him succeed. In fact, he thinks he may win re-election.

Outside the house, Kandi speaks to Julie who says that the live audience let out a gasp when Ricky voted to evict her. Kandi says he did not do the right thing, but she enjoyed herself in the house and she is glad she was there.

It is time for the final HoH competition. This one is called Celebrity Lookalike Junior. Julie will show a video of one of the celebrity lookalikes and during each, the junior lookalike will make three statements, after each video, Julie will ask them to identify the false statement. The houseguest with the most points after seven videos will win the final and most important HoH competition.

Ricky gets to decide who to take to the final two with him. But first, the women get a chance to make a plea for him to take them. This is a quarter million dollar decision. Ricky chooses to evict Lolo and Dina, there is another gasp from the audience when Ricky says Lolo. Tamar is unreal, she is shaking and trembling.

Lolo is in shock, she saved Ricky many times and she could have aligned with Kato. Lolo says that she cannot be friends with Ricky after the game because he broke his word. Dina says the experience was amazing and she made eleven friends. Lolo is emotional and says that $50k is not that much after taxes for Ricky to win, she is assuming that he will come in second place.

All the evicted jurors are outside the house. Julie gives them an update on how Ricky and Tamar ended up in the final two.

The jurors get to ask the final two questions. Tom asks Ricky what does he think his biggest game move was. Ricky says not freaking out when he was on the block. Tom asks Tamar her biggest game move, she says it was gunning for the biggest threats in the house. Natalie asks Ricky his biggest regret, he says not winning slaughterhouse. Tamar same question, she says her biggest regret was getting too emotional sometimes and it affected who she trusted in the game. Ryan asks Tamar why should they choose her over Ricky, she says that is tough but she is a huge fan of the show and she played with very limited lying. Ricky says that he should win because he played the game hard and gave good advice to everyone.

Now each has the turn to say why they deserve to win. Tamar says this turned into a spiritual journey for her, she lost her job publicly, her husband and she has always been kind. She asks the jury to be kind to her who is trying to get back on her feet.

Ricky apologizes for anything he has said to piss anyone off. He was himself in the house, moody and nerdy. He says to keep it real, keep it alive and keep it moving.

Time to vote. One at a time, the jurors have to enter the key into the box of whom they want to win CBB. Jonathan says he is voting for someone who his back as much as they could. Ryan says good luck. Joey says kick butt. Kato congratulates the two and apologizes to Tamar for slipping on shrimp. Natalie says she is so excited to see the two up there. Tom says it is a tough choice for a lot of reasons, but he does congratulate them both, he is voting for the one that made him laugh the most. Kandi says that it was life-changing for the two of them. Dina says she has to make a choice. Lolo looks angry and says you can make a decision based on deals or with your heart.

Anthony didn’t vote because he wasn’t a real houseguest, but he is there on the panel with the jurors.

Joey tells Julie that he is happy that he got to meet Ryan, he is a genuine person. Julie asks Ryan how he feels walking away with great friends after being on the show, he says it is amazing and he couldn’t be happier. Tom says that he is surprised how intense it was in the house and when he got out, he felt a little strange but after reading the comments from America, he felt really great. Kato says he was surprised how much everyone snored in his room and it was tough, he was really tired.

After a jam-packed twenty-nine days, it is time to reveal the winner of Celebrity Big Brother.

Julie looks at the other votes, it was unanimous, all the votes were for Tamar.

Julie congratulates Tamar who says she is so grateful and now she can buy her baby a house.

Julie announces that America has chosen Tom Green as their favorite houseguest, he wins $25k.