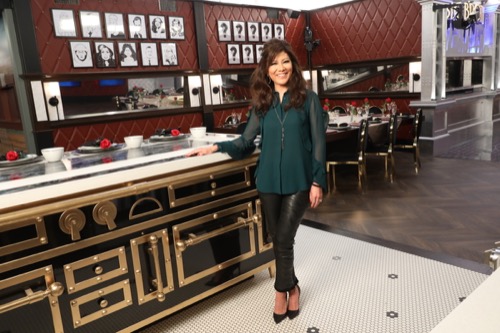 Each week, someone will be voted out of the house, with the last remaining Houseguest receiving a grand prize.”

In just moments twelve celebrity houseguests will be moving into the Big Brother house in the hopes of winning the $500,000.00 grand prize.

Here is the first set of houseguests: Ryan Lochte, a former Olympic swimmer is now a family man with another child on the way. Nathalie is a former WWE wrestler but now focuses on a fashion brand. Tom Green is a comedian and a cancer survivor. Lolo Jones is an Olympic track and bobsled star, and a virgin who says she doesn’t know where to find a man. Kato Kaelin is best known as the prosecution’s witness in the O.J. Simpson trial, he claims to be the biggest extrovert and hopes O.J. won’t be in the house. Tamar Braxton is a singer, her favorite job is the mother to her five-year-old son.

Time for the first group of celebrities to meet each and enter the Big Brother house. Julie warns the houseguests to expect the unexpected.

The houseguests choose their beds then they meet in the kitchen to get to know each other.

Time to meet the final six celebrities: Joey Lawrence, most famous for the show Blossom, he loves working out, it is a big part of his life. Dina Lohan, she manages her children’s careers, she loves competition and looks forward to being the house mother. Jonathan Bennett is known for hosting the wars on the Food Network, his strategy is to be nice to everyone. Kandi Burruss is mostly known for the Real Housewives, she has facial expressions that she can’t control. Ricky Williams in a former NFL superstar, he is retired and is getting his degree in Chinese medicine, he wants to show people who he is. Anthony Scaramucci got fired from the White House for some bad words, he has five children and will miss them a lot.

Time for the final six to enter the Big Brother house. Kandi and Tamar have a history, some good times and some bad times and Kandi is a bit worried. Tom feels like he has something in common with Anthony, they were both fired by Donald Trump. Most of the houseguest seem happy to see Joey Lawrence.

Big Brother: Julie gathers the houseguests into the living room, she tells them that there have been many power pairs and tonight two of them will become the first two Celebrity Big Brother power pair. It is time for the first competition and they will be competing in pairs.

Only five pairs will be competing. Ryan gets to choose first, he chooses Jonathan. Tamar chooses Kandi. Joey chooses Ricky. Lolo chooses Tom. Dina chooses Anthony. Kato and Natalie are the last two, they won’t compete but are safe in the first eviction.

The competition is called, “drinks on us.” The houseguests are sitting in swings and they have to try to swing back and form to fill up their champagne glass, transfer it to their partner, and dump it in the huge champagne glass in front of them.

Ryan and Jonathan have won the competition and that means one of them is going to be the first HoH.

Julie announces that Ryan and Jonathan must now battle against each other. The winner will be the HoH, the loser will become the first nominee of the season.