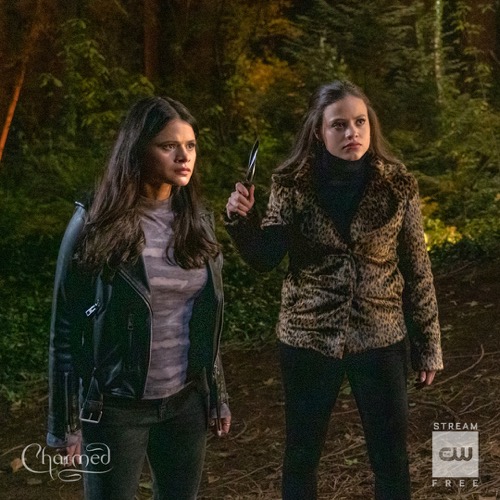 Tonight on CW their reboot of the 1980s popular show Charmed airs with an all-new Friday, November 8, 2019 episode and we have your Charmed recap below! On tonight’s Charmed Season 2 Episode 5 “The Truth about Kat and Dogs,” as per the CW synopsis, “Mel and Maggie attempt to find a missing Macy with a spell while Harry uses a different method: allowing Abigael to help him access his subconscious in an attempt to connect with his dark side.”

Tonight on Charmed, Mel, and Maggie attempt to find Macy who’s been taken by the Darklighter, but kill their last lead to Macy and end up freeing a woman in a barrel from a demon who was planning on killing her.

Abigail suggests Macy is dead by now which upsets the sisters, Mel decides to use a spell to find her from a book of banned spells which Harry opposes. The sisters move forward with the spell and gather the ingredients needed. Mel and Maggie perform the spell from the banned book and are greeted with a vicious Rottweiler in their living room that chases them and they try to barricade themselves from the dog. The sisters feel they have gotten some of the ingredients wrong and attempt to do another spell to fix it. They manage to escape to the greenhouse with new ingredients and try again but this time an even bigger dog comes flying through the window.

Kat remembers the astral plane and has side effects of worms which she’s not supposed to have any memory of. Maggie tells Mel she’s broken the no relationship rule between her and Kat but Mel insists she hasn’t.

Harry continues to try to translate the book Abigail offers to help Harry access his memories to try to find the dark lighter in exchange for her freedom from the containment spell cast on her by the sisters. Harry gives in and Abigail proceeds to help him gain access to his subconscious which is connected to the Darklighter in hopes of finding Macy. They see a memory of Harry and his grandmother on his birthday, then onto a memory of his father smoking. Abigail suggests they dig deeper.

Harry faces a memory that reminds him of abandoning his child which upsets him, they move on to the next memory which is a woman screaming behind a closed door. Harry attempts to break the door down which Abigail says is a mental firewall and encourages him to relax and surrender. Harry opens the door to find a painting that gives him the idea to go to Scotland back to a castle where he finds members of the castle dead killed by hires assassin called the Caliban. Harry’s next memory is of the elders performing a spell to extract and bottle up the Darklighter from his body in a smoke form and is placed into a bottle and on a shelf.

The dog chases Mel and Maggie and they hide in a room as they try to figure out the right ingredients for the spell. Mel admits to Maggie she kissed Kat in the astral plane, and it triggers Maggie to finding the right ingredient for the spell, Macy’s journal, which they have to go retrieve from her room. They manage to get to Macy’s room but the journal isn’t there. Kat sends a text to Mel telling her where to find the journal they find it and find drawings of Harry. They perform the spell with the book and the dog projects coordinates from his eyes which may lead to Macy.