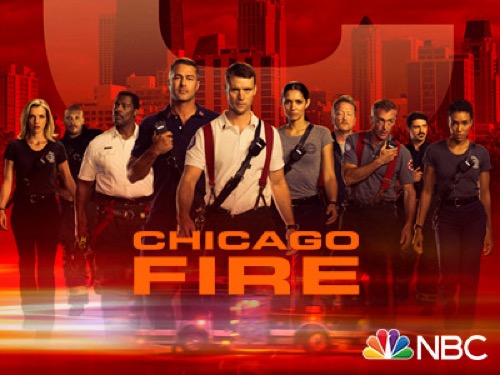 Tonight’s Chicago Fire season 8 episode 1 looks like it is going to be great and you won’t want to miss it.   While you’re waiting for our recap make sure to check out all our Chicago Fire recaps, news, spoilers & more, right here!

Chicago Fire begins with the mattress factory’s boiler explodes with the crews still inside. Chief Boden (Eamonn Walker) checks and Emily Foster (Annie Ilonzeh) who is okay. She calls out for Sylvie Brett (Kara Killmer) who isn’t moving. Those who made it behind the door to safety call out, “May Day” to get everyone out. Sylvie’s arm is trapped under a concrete block as Matthew Casey (Jesse Spencer) says the roof collapsed and they are under 2 feet of concrete; he is told to take care of Brett.

Joe Cruz (Joe Minoso) hears the alarm sounding and calls out for Brian “Otis” Zvonecek (Yuri Sardarov); he calls for the crews to help him that it is Otis and they carry him out, all saying he is not responsive and firefighter down. Brett is crying and Cruz is devastated as they put Otis in the ambulance, Cruz traveling with him to the hospital. They rip opens his jacket and his chest is completely burnt.

Once at the hospital, all the firefighters gather, awaiting world, shaken and in utter shock. Christopher Herrmann (David Eigenberg) pulls Ritter (Daniel Kyri) aside, telling him that when he gives him a direct order he needs to follow it, he doesn’t care what he wants as he is his lieutenant and he is responsible for his life; whether he cares about it or not. The doctor finally comes out and speaks to Cheif Boden, who reveals to all the squads that Otis is not going to make it. Cruz speaks to him before they have pulled the plugs. He tells Otis he loves him like a brother and is going to miss him and Otis starts to talk to him, but then he dies looking at him.

Sylvie gets her cast removed after 3 months, who is congratulated on her engagement and applying at new firehouses. Kyle Sheffield (Teddy Sears) picks her up and will bring her to the firehouse for an interview; promising to make dinner so she can hear all about his lecture that day.

Meanwhile, at Firehouse 51, everyone files in for a shift, with Otis picture up beside Shay’s on the wall; something Joe still acknowledges every day. Matt Casey notices it and wonders about. Boden talks to them about their shifts, Stella Kidd (Miranda Rae Mayo) will be working with Emily until her new partner arrives. While they are in the dining area, Chad Collins (Austin Peck) arrives and he is her new partner, but he cheesily tells her they are going to be great friends; asking her where the pisser is at. Randall “Mouch” McHolland (Christian Stolte) insists he knows him from somewhere.

In Boden’s office, he wants to keep Casey and Kelly Severide (Taylor Kinney) informed that the report about the fire from the mattress factory fire is being delayed but there is nothing they can do but wait. Casey hasn’t found the right fit for Truck 81, even though it has been 3 months, but he promises he is looking. They are both dismissed. Outside the office, Matt hates that they have to keep reliving the call but Severide tells him not to let these pencil pushers get to him.

Mouch learns Ritter took a pipe puller from the rig after the last fire, sending it to equipment maintenance as Stella feels it has been great having him on the truck since the fire but he worries about Herrmann not even looking at him since then. Mouch and Stella feel that is his default disposition, but they kind of agree with Ritter silently. Stella watches as Chad screeches a song while loading the rig; Severide sneaks a kiss in as he walks by her as well.

Sylvie has her interview and is hired simply by a shake of hands. She runs into Hope right outside the firehouse, where she rants to all the firefighters that Sylvie was engaged right out of college but never got married and became a firefighter in Chicago but her mother said she would always be back because Chicago was too big and now she is. So she hopes they can reconnect and make up for what she did. Sylvie can only smile and agree, as they are standing in front of her new colleagues.

Stella and Kelly enjoy a romantic time until they hear sirens and she asks how Casey is really doing; he says Matt carries the weight of this more than the rest and that he is going to Molly’s tonight; they both agree to head over there. Iboden spots Joe sitting alone at the table, and joins him. Joe says he is doing good, joining the church activities and that Molly is really good; overall he has been all right. Joe looks away and says the last thing Otis said to him was a Russian phrase that he has no idea what it means because he doesn’t want his last interaction with him to mean something sad. His big fear is all these badges at the academy and plagues on the walls; what if 5 years from now there are all new people in the houses and no one knows? That is what he is thinking about and begins to tear up; Chief admits he never asked him that but he asks himself those same questions all the time, they are interrupted when HQ calls him.

Casey tells Severide if he and Kidd need more privacy all he has to do is tell them. Boden gives them the bad news that because of the sensitivity of the report, they have decided to hold an inquiry and focusing about the call Casey made to call the paramedics into the fire scene and it is happening next shift. Severide knows this is “scapegoat” time as Matt feels this is endless.

Emily gets her first call to work with Chad, who is forced to run into the rig as he is late; they race off with Truck 81 for a child trapped inside a game. Foster and Chad breath with the child as the firefighters cut open the side of the machine and get him out; Collins is distracted by the music more so than helping the child. Stella jokes that she wants her next birthday there as matt is extremely frustrated about what is about to happen.

Boden asks Emily how things are going with Chad and she says it is between barely competent and completely lazy, but she will have to carry the load for the next few shifts. Today, however, there is an inquiry for the mattress fire. She thinks this is ridiculous and agrees with Matt’s decision and will gladly put that into writing.

Inside the lounge, Mouch spots an ad and realizes where he knows Chad Collins from, and it is a cologne ad in a magazine where he is lounging in his boxers. When Mouch thinks he is about to embarrass him; Chad signs it and gives Mouch a thumbs up on it, making the other guys giggle.

Casey, Severide, and Boden arrive at HQ for the inquiry; prepared to defend their actions in the safety hearing. They review Captain Casey’s words to Battalion Chief Boden on the day of the mattress factory fire; but Boden stands up, saying that he was the one who ordered them into the fire scene so if they are looking to blame someone or a human scapegoat; than they need to blame him.

Casey and Severide stand outside, pacing the floors waiting for Boden to emerge from the meeting. When the meeting finally adjourns, Matt has been cleared of any wrongdoing. He tells Boden that Severide told him that once he is stamped cleared the file will be shoved in a desk and forgotten about, but Matt feels he will never forget that day; he lost a firefighter.

Severide announces to the house that Casey has been cleared, causing Ritter to confront Herrmann, admitting he was wrong to defy orders and if he ever saw fit to bring him back to Engine he would not hesitate to follow his command. Herrmann smiles, saying he is only lending him out to Casey until he finds a good fit for Truck 81. Ritter admits he was worried as Herrmann won’t apologize for being rough on him, Ritter promises to make it right. Emily spots Chad showing Mouch how to pose as a model, embarrassing Mouch and causing Emily to call Sylvie telling her the house is going mad.

Meanwhile, Kyle suggests to Sylvie that her folks’ have a nice piece of land and they should look in that area for land. She agrees, but maybe not so close. He notices she isn’t too happy, causing her to explain the firehouse might be slow and Hope is going to cause complications she doesn’t want to deal with. He also has issues, saying she doesn’t have to work as being a chaplain’s wife is work. She can try it out and maybe go back to work part-time, but there is no pressure. She doesn’t seem impressed at all.

Joe is laying down when Ritter tells everyone that Boden wants them all outside. He asks them, “who is going to remember us?” a question they all ask themselves at one moment or another. Who will remember their work after they are gone? He reveals a statue they erected in honor of Otis, a brother, friend and one hell of a firefighter. He wants them to tell whoever is looking at the monument to come out and explain to the person looking at it who Brian was; what kind of man he was and that way they can bring the memorial to life. He says the phrase Brian said in Russian, causing Joe to look at him, which means, “Brother I will be with you always!” Boden can’t think of a better way to remember Brian so from this day forward this memorial site is sacred ground! They all kneel and touch each other’s shoulder; with his bronzed helmet on top!!