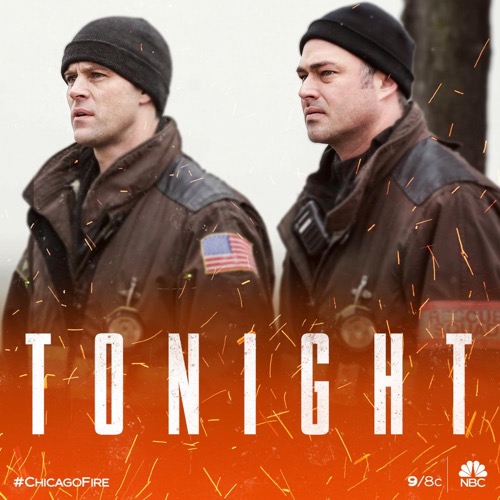 Tonight on NBC Chicago Fire returns with an all-new Wednesday, January 23, 2019, season 7 episode 12 called, “Make This Right” and we have your Chicago Fire weekly recap below. On tonight’s Chicago Fire as per the NBC synopsis, “The firehouse is called to a motorcycle crash, but Casey and Severide sense that the details don’t add up and work to determine exactly what transpired. A rift develops between Mouch and Otis. Brett, Foster and Kidd work to secretly fix a dent in the ambulance bumper they believe they unknowingly caused.”

Tonight’s Chicago Fire season 7 episode 12 looks like it is going to be great and you won’t want to miss it.   While you’re waiting for our recap make sure to check out all our Chicago Fire recaps, news, spoilers & more, right here!

Chicago Fire begins with Stella (Miranda Rae Mayo) and Sylvie (Kara Killmer) waiting for Emily (Annie Ilonzeh), who is kissing her girlfriend goodbye as they rush off to work for the morning. Both Kelly (Taylor Kinney) and Matt (Jesse Spencer) also arrive late for work, literally running into Chief Boden (Eamonn Walker) on their way in; Severide rejects the idea of going on a date with his cute neighbor.

Mouch (Christian Stolte) is trying to get the TV working when Otis (Yuri Sardarov) jokes about how old Mouch really is. The alarms sound for a vehicle accident, Truck 81 and the ambulance are off. They are able to lift the motorcycle off the victim when Emily is told to get the strap as they try to straighten his leg. When they remove his helmet, he looks at Matt and calls him Curtis, saying not to worry as they will go to Big Sur! Matt tries to correct him, but he is out. They lift him onto the gurney as CPD says he just found him like that.

When Truck 81 returns they find Sgt Trudy Platt (Amy Morton) had dropped off their TV from home, something she was more than eager to do. Otis laughs when he sees it, calling it ancient asking if it is “steam-powered”. Mouch snaps saying he knows he is old, but at least he doesn’t spend his weekends pretending to fight dragons and play with Star Trek dolls, but at least he is a man. Otis is upset, saying clearly Mouch has thin skin.

Stella missed the drama between Otis and Mouch, but she has an issue of her own. She hit the ambulance and knows how much women driver grief she is going to get from this. Suddenly Dr. Shaw arrives, leaving Emily smiling and explaining she will be having drinks with the doctor later, revealing the girl she is seeing is super casual.

Mouch says he doesn’t need this and walks out of the bathroom. Ritter (Daniel Kyri) runs after him but doesn’t hear him. Mouch wants to switch shifts with the first or any other shift; Boden says if anything comes up he will let him know, Ritter pretends he didn’t hear anything.

Severide talks to Matt about the accident, who reveals that the victim was talking to him, believing Casey was his son. It might have been recklessness, but it wasn’t like the victim was some young punk; Kelly and Matt wonder if it was done intentionally and suggest talking to the cop who is investigating. Sylvie walks in, telling them the victim died of a massive brain bleed. Matt and Kelly talk to CPD Officer Chaffee, who says its usual yahoos who spin out there; but it could have been someone who hit road debris or something. He is surprised that firefighters that get so involved, offering to check out any road cameras in the area.

Stella tries to plunge out the dents, but nothing works. After the shift, everyone is going to Molly’s except for Mouch who says he is going home to play poker. Ritter feels there is something they should do something to correct things between Otis and Mouch, but both Herrmann (David Eigenberg) and Cruz (Joe Minoso) warn him to stay out of it; although things have never gotten this bad between them before.

Trudy talks to Mouch about the poker game and how he plans on sticking around. He wonders if she thinks it is about time he retires. She tells him that he is in his prime, although he doesn’t think everyone agrees with him there. He steals a handful of junk food and heads to the bedroom.

Emily enjoys drinks with Dr. Shaw, who is asking a lot of questions. She thinks it is sweet, but it is her turn and all she wants to know is if he wants to get out of there and brings him back to her place. At Molly’s Herrmann talks about having local trivia at the bar when Otis keeps looking at the door for Mouch. A stranger walks in, looking for Matt Casey and Herrmann points to his table. He introduces himself as Chris, the son of the man on the motorcycle and the only thing they know is the police report said “rider error”. Matt reveals his dad said, “Don’t worry kid, we are going to Big Sur!” Chris reveals every year they do a big ride. They realize his dad was wearing a camera in the accident.

Matt and Kelly walk through the scrapyard where they find the motorcycle but don’t find the camera on the helmet nor the handlebars, but they do find where it was mounted on the helmet, believing it was knocked off on site.

Ritter tries to talk to Mouch, but he says until he gets an apology from Otis, there won’t be any smoothing. Ritter then approaches Otis, saying that he thinks all it would take is an apology for this to end; Otis knows what he meant but if they can’t sit in the common room and have humor, how can they survive the job. Herrmann understands, saying they are in uncharted territory here as Ritter worries that Mouch might actually retire.

Emily says Shaw was fun, but she isn’t looking for a relationship right now. She was so focused on becoming a doctor that now she wants to take it all in. They continue to work on the dent with heat and cold but nothing works. A call comes in and they all head out to the art gallery where a teen is stuck in a modern piece of art.

Instead of sawing into the piece of art, Matt realizes they may be able to take it apart from the bottom, slowly able to remove him from the piece of metal as Kelly says, “Let’s put this ugly thing back together!” Matt suggests once they have the piece back together they should stop by the accident site which is just around the corner. As they are leaving, Emily runs into Shaw; she tells Joe she had a great time with him that night but isn’t looking for anything serious; Sylvie feels bad for him.

Matt and Severide call their teams out to dig through the garbage bags to see if they can find any debris from the accident. Meanwhile, Stella, Sylvie, and Emily are able to get the dent out of the ambulance.

Otis hooks up the camera, even though it is severely damaged, hoping he can retrieve information from it. Ritter isn’t happy with the situation and Boden wants to know why he is moping around. Ritter says Mouch is the reason he is there but Boden reminds them the firehouse is just like every other family and sometimes they fight but hopefully, it will solve the problem. Otis gets the video going as everyone watches, they witness as Officer Chaffee cut him off and got him killed.

The footage is brought to Antonio (Jon Seda) who demands to know what happened. He ran a stop sign and then lied about it. Matt and Kelly both feel he had the chance to come forward as Antonio says he will take it from there; Kelly and Matt leave. They go to see Chris who isn’t interested in seeing a lawyer, as that isn’t who his dad is and he would have forgiven the guy. His dad was able to donate all his organs to several people. He thanks them for getting him answers, saying he would have liked them.

Stella says both Sylvie and Emily better be at trivia night at Molly’s but as they walk out, the next shift says the dent they put in the ambulance from hitting the traffic light is gone. At Molly’s, Mouch sits with Cruz on the opposite side of the bar while Ritter sits in the middle as Herrmann tells them to stop it, saying Ritter is willing to make himself look sooooo stupid just for them to get along. They all begin to joke about how he looks and Herrmann orders Mouch and Otis to hug it out. Otis reminds Mouch that he also raised Otis up at 51, but he isn’t going to cry and tell him how much he means to him – they are firefighters! Mouch says he appreciates it and maybe once in a while when the TV goes on the fritz he is thankful for his deep brain.

Everyone is glad they worked it out. Shaw is there, leans in and tells Emily he isn’t going to give up so easily. When asked by Stella, Emily gets a serious face, saying she isn’t sure what that was all about!