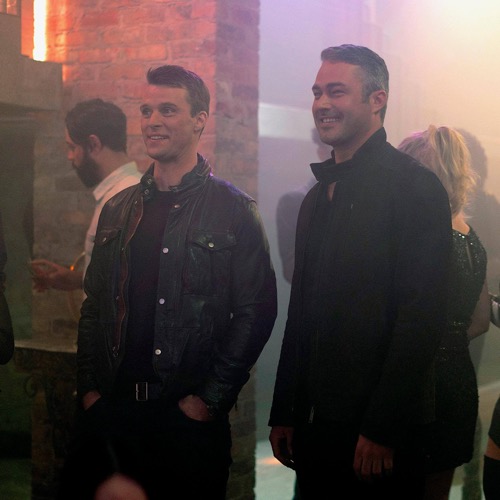 Tonight on NBC Chicago Fire returns with an all-new Wednesday, February 06, 2019, season 7 episode 13 called, “The Plunge” and we have your Chicago Fire weekly recap below. On tonight’s Chicago Fire as per the NBC synopsis, “Cruz leads the charge in getting the firehouse to gear up for the Polar Plunge. Herrmann has a hard time bouncing back after dealing with a tough call. Foster’s personal relationships begin to interfere with her job.”

Tonight’s Chicago Fire season 7 episode 13 looks like it is going to be great and you won’t want to miss it.   While you’re waiting for our recap make sure to check out all our Chicago Fire recaps, news, spoilers & more, right here!

Foster keeps getting calls from an unlisted number. She doesn’t want to answer it because she was wasn’t sure if it was a scam or not, but that didn’t stop the person on the other end from calling Foster at all hours of the day. It was like this person wasn’t getting the hint. Foster went as far as complaining about it to Brett and Brett hadn’t thought it was serious. Which made Foster believe it wasn’t serious. She continued to ignore the calls and she went into work ready to forget the cold. She didn’t think Cruz would bring up the Polar Plunge. The Polar Plunge was a charity event that involves people jumping into Lake Michigan in the freezing cold and this year Cruz wanted to do it as a group.

Cruz got a few takers willing to join him and so it was people like Foster that weren’t going to do it because they were already thinking of moving down south and didn’t need any further incentive. But everyone was laughing about it when they got a call. They left the firehouse to go check on an emergency when someone clipped their truck and the firefighters were forced to deal with their own accident. The car that hit them had a young man and his car developed a fuel leak. He needed to be moved and so Hermann decided to go in there. He went into the car and he quickly got the victim out of the vehicle. And that should have been the end of it, except the car exploded not long after their escape and the guy became choking on his own vomit.

Brett and Foster were able to treat their patient’s symptoms with what limited equipment they had but watching the young man almost die so many times took a toll on Hermann. His oldest son was preparing to go off to college and he could easily have been someone following too closely to the fire truck. Therefore, it got to Hermann. He couldn’t help seeing how close the kid came to death and that followed him all the way back to the station. Hermann watched as the others got excited about jumping into the lake and he saw them as they tried to test themselves by eating outside for lunch. They were all having fun while Hermann stayed inside and kept going back to that scene because he soon wanted to know if there was anything he could have done differently.

Chief Boden found Hermann brooding and he did his best to tell the other man that he did everything he was supposed to, but he could see how it didn’t really get through to Hermann. Hermann was in this odd headspace of partly blaming himself and partly blaming the young man that hit the truck. He didn’t cause the young man to ride his bumper and he sure as hell wasn’t the guy taught him how to drive. The kid probably thought he could keep up with the truck and get out of having to stop at lights. Either way he should have taken better came to keep the allowed space between vehicles and so Hermann doesn’t know why it bothered him. He just knows that it does and that nothing his friends have said has changed the way he feels.

Later, Chief Borden was brought another problem. It seems someone had made a complaint against Brett and Foster. The two women believe that this complaint was from the guy that’s interested in Foster and she at first tried to ignore him though when that didn’t work she told him that she didn’t want to become involved with him. It was after she turned him down for the final time that this complaint was made and so she told Brett what happened. They believe that this guy was trying to harass Foster and even get her license revoked just because she turned him down. And so they brought this to Borden who said he would take this up with the doctor’s control of their licensing because he didn’t want Foster to be harassed out of a job.

The Chief did as he said and he tried to fight against the allegations, but it turns out there was one piece of truth to it because the women had used a medication on their patient that’s usually prescribed by a doctor. Any doctor worth their salt would have gone to the same thing and so there was merely one doctor that argued with what the women did. He said he wouldn’t have used that medication and that made the allegation valid. Foster also couldn’t prove that she’s been harassing because Dr. Shaw could up with a good excuse to explain all the creepy ways he freaked Foster out and so she was stuck even as he called her again. He left a message saying that he could rescue her by putting in a good word for her with the board and that they could meet up for lunch to go over the particulars.

Foster played that message for Brett and Borden. They wanted to take it to the board, but Foster said that it seems harmless until you know Shaw’s intent and so she got mad. She said she was tired of him calling the terms and bringing other people into her business. She was advised to take a breath and she couldn’t. She didn’t want to stay back at the Firehouse and so she responded when they were called out. Foster and Brett were brought in to treat a man that left his window open when he took a bath and it seems he froze to death. Only Foster said that his core temperature was all wrong because of the cold and so she worked on the patient when no one else did. And she brought the man back around.

Foster pulled off a miracle with what she did and so that helped pick up her spirits. She later confronted Shaw at work in front of everyone and he tried to get in her face, but Brett called Borden and all of the firefighters showed up to support Foster. None of them were going to tolerate her being harassed and they let Shaw as well as that hospital know that they were on notice. It also served to remind Foster that she wasn’t alone in all of this. She had support from her coworkers and her friends who all were to help her. In the end, she even hugged Brett because she realized at that moment that Brett was probably a better friend that she thought she deserved.

Hermann hadn’t been with the boys when they went to back up Foster because he had gone to see that kid in that hospital. The young man was still in intensive care, but he was expected to recover and so Hermann went home ready to explain himself to his wife Cindy. He had gotten into a huge argument with her over their son driving and he had been forced to sleep on the couch for it. But she found out what happened at work and so she forgave him long before he asked for forgiveness. Hermann’s whole family went to that charity event to support the firehouse and everyone had been surprised when Foster showed up because she said she wanted to be there for the family. And so she too participated in the Polar Plunge.