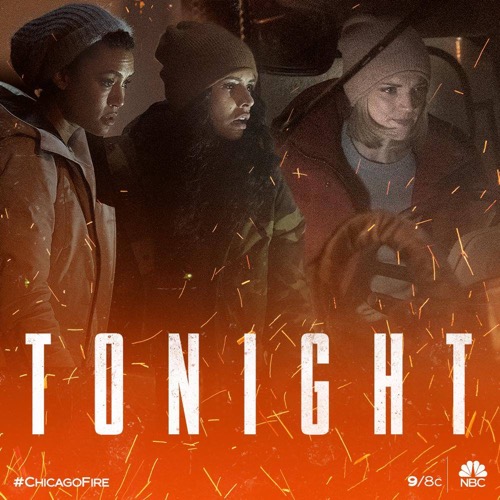 Tonight on NBC Chicago Fire returns with an all-new Wednesday, February 13, 2019, season 7 episode 14 called, “It Wasn’t About Hockey” and we have your Chicago Fire weekly recap below. On tonight’s Chicago Fire as per the NBC synopsis, “Brett, Foster and Kidd take a road trip to Indiana for a getaway and encounter a bus accident involving a boy’s hockey team that will leave them scrambling and relying on their instincts to save those hurt in the accident. The rest of Firehouse 51 competes in the annual Chili Cook Off.”

Tonight’s Chicago Fire season 7 episode 13 looks like it is going to be great and you won’t want to miss it.   While you’re waiting for our recap make sure to check out all our Chicago Fire recaps, news, spoilers & more, right here!

Chicago Fire begins tonight with Stella (Miranda Rae Mayo), Emily (Annie Ilonzeh) and Sylvie (Kara Killmer) deciding to go on a road trip to Indiana. They take off in separate vehicles but excited to go. Inside the firehouse, Herrmann (David Eigneberg), Cruz (Joe Minoso) and Otis (Yuri Sardarov) are busy working dinner, where the fill-in paramedics are complaining about the stench. Boden (Eamonn Walker) announces that the chili cook-off has officially begun and reveals where everyone is to go and judgment will begin at 8 pm. Matt (Jesse Spencer) jokes that it is competitive in terms of flavor.

Sylvie shares trivia with Emily but they are pulled over by a man who appears to have been in some sort of accident with his tractor. He says no one comes this way since GPS bypasses this way. He wants one of them to hold the flashlight while he works, suddenly a bus comes out of nowhere, flipping on its side and crashing into their car.

Sylvie checks on Emily who seems to be okay. They check on Duane Reynolds (John Lister), who appears to have fractured his leg. Emily checks on the bus, learning there are kids inside and trapped. She kicks in the window where the coach and 8 hockey players are in. She takes the lead, saying whoever can move, make their way out of the bus; Austin says it feels like his arm is out of the socket. Emily tells Austin to take deep breaths as the coach helps the other kids out.

Hollis (Chronicle Ganawah) worries that them celebrating their win might have distracted the coach from driving, but he assures him that isn’t the case. Brett tells them to set up the flares and to keep moving as it will get really cold; the nearest house is 8 miles the other way. Sylvie says hockey sticks will work for Duane’s leg, learning that there is literally nothing around there to help them.

Joe and Otis talk about their Valentine’s Day plan as Mouch (Christian Stolte) walk by insisting he is only going to use the bathroom. The fill-in paramedics are bitching about all the health code violations with them cooking in the hallway, right in front of the bathroom. Matt orders everyone out of the hallway, except for Otis and Cruz. Cruz wants to know when they are going to get their girls back; Matt pats him on the shoulder, saying they are probably having the time of their lives.

Herrmann calls Stella before she leaves, saying the delivery guy is going by Molly’s tonight, asking if she can sign for everything; which she agrees. Mouch tells Herrmann what Cruz and Otis are using in their chili.

Sylvie wants Duane that it is going to hurt and she straightens his ankle and leg before placing hockey sticks on either side to stable it. Hollis introduces himself as Duane knows who they are as the team wasn’t supposed to make it. The coach learns that Hunter is still on the bus somewhere, Emily forces him to focus on Austin right now, as they yank his shoulder back into the socket. The coach brings Austin to Hollis to take out of the bus, demanding to know what Austin’s comment was all about. Emily finds Hunter and shouts for Brett as Hunter’s neck is on an angle and he can’t breathe.

Brett comes in, asking the coach for any neck guards. Emily talks Hunter into staying with her, they brace his neck while they try to lift the seat off of him. Emily encourages him to hold tight, but they are unable to do it; Brett has a jack in the car. Hunter reveals his mom didn’t want him to play this year as they wouldn’t amount to much. He talks about them winning, and a lot of parents came but his mom was working.

Otis brings ox tail, knowing it is a risk but it is worth it. He feels they have to shock and overwhelm the taste buds in cook-offs. Cruz wants Severide (Taylor Kinney) to tell him he is crazy, but he sides with Cruz. He calls Matt to join him for a smoke break on the roof as everyone is busy cooking.

Brett jacks up the seat, but when the coach removes the seat, Hunter starts to bleed, realizing part of the seat is stuck in his side and he is bleeding out. They need to get him out of the bus immediately!

They rush to pack his wound, as the coach tells the Mustangs he needs all hands over at the bus right now. Hunter is told to hold his side as coach prepares the boys. Brett and Emily carry Hunter to the window where he thrusts him out the window to the team. He lays on the ground as one holds the flashlight. Brett worries that the wound is deep and tells Hollis to get the duffel bag and tequila from their car. A couple of the hockey players want to run back to the highway, which Emily thinks is a good idea because even if they stop the bleeding he is going to need surgery.

Jacob argues with the coach, saying he isn’t their coach – at least, not for much longer as he is quitting after the season is over to go to a fancier school with a better program. He says he cannot have two boys running on the road by themselves, so he needs Jacob to stay behind and be the leader; he chose him as captain for a reason! He runs with one of the boys down the road, as Brett looks on concerned.

Stella questions the delivery man, but he wants her to stay for another 30 minutes, as his boss would kill him if he screws up another order. Stella tries to call Sylvie, wondering if they are already having so much fun they can’t answer the phone. Meanwhile, Emily and Sylvie begin to work on Hunter. She tells Jacob to talk to him and asks Hunter to focus on Jacob as this is going to get rough. Hunter talks to him about how he said this wasn’t about hockey and they couldn’t give up on each other. He tells Hunter he has got this, as Emily believes there is a piece of metal inside of him.

Sylvie uses tweezers while Jacob tells him they need him, and not to quit like a coach. The metal is removed but they cut an artery and need to heat a metal bar in order to stop the bleeding. The entire team stays with Hunter, refusing to abandon him while it happens; the bleeding stops as Brett asks the boys to find any clothes; but when Jacob goes to retrieve them, he falls on the ground.

Jacob isn’t breathing, Emily says that he has blunt force trauma and doesn’t have a pulse so they have to do this old school. Brett begins to punch his chest, but nothing. Hollis has a epipen in the bus and they go to get it but it is stuck in the hole under the bus. Emily calls for Brett, saying they are losing him. Stella is driving, informing Otis that they have everything and she signed it all. Otis reveals that Cruz shut him down for the oxtail; Stella says she is losing signal and will see them on Friday.

Otis tells Ritter that Tuesday is obviously barking to go outside. He tastes the chili and shouts to Joe that they need to pull out all the stops as Ritter’s is delicious. Ritter finds Severide and Matt making chili, saying he cannot say anything as they are surprised competitors this year. Ritter reveals he has to pull out as Tuesday dropped one of her chew toys in his pot. Severide scoffs that he would have lost anyway.

They all work together to move the bus to get the bag, Duane tells Sylvie to use the bucket on the tractor to lift the bus, she knows how to work it but believes it might be stripped. She jumps out of the tractor and spots headlights. It’s Stella who learns from Emily what happened. Stella needs chains to move the bus, but they find out Hunter’s pulse is dropping. The team works with Sylvie to get Hunter into the jeep. Stella tells Brett to back up the jeep with the chains secure and she reverses with wheels squealing.

Slowly the bus moves as Stella takes over compressions from Emily. Hollis is able to retrieve the bag, shouting that he has the epipen. He gives it to Emily who injects it into Jacob’s arm. He is revived and breathing on his own. Stella grabs the chain but sirens quickly approach with the coach leading the police and EMTs. Stella works with the medics and the kids are transported to the hospital. Emily complains that this is the worst Valentine’s ever, but Stella says next year she is staying in bed watching movies. Coach returns, saying Jacob is up and talking but doesn’t remember collapsing. Hunter is a little loopy but they saved both the boys’ lives. He thanks them for what they did and they are honorary Mustangs for life. He confesses that he isn’t going anywhere, because what kind of coach would he be if he quit on the boys who never quick on themselves. The parents come barging in and coach tells them all of their boys are okay. Emily laughs at being an honorary Mustang. Duane comes out on crutches and isn’t surprised that Sylvie is the same type of person he is.

At Firehouse 51, the competition begins with Chief Boden bringing out his silver spoon, everyone shocked to see that Severide and Matt walking in before he tries anything. They mix the pots up and Boden begins taste testing each one. He tells them they have a winner and it is number 4. It turns out that Team 4 is the fill-in paramedics, who say it has been a very profitable shift. They leave as everyone begins tasting the food.

The three women enjoy drinks, saying their replacements won the chili cook-off. Stella realizes that they chose this night off because they hate chili night. Sylvie says you can’t give firefighters a whole bunch of beans and then expect them to bunk with them. Emily finds it crazy that they were there at that moment, but believes they were there for a reason; each one takes a sip of their wine, pondering!