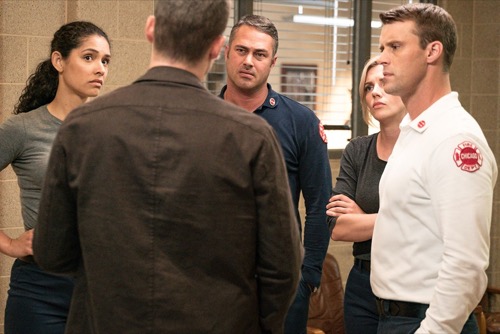 Tonight on NBC Chicago Fire returns with an all-new Wednesday, October 16, 2019, season 8 episode 4 called, “Infection, Part 1,” and we have your Chicago Fire recap below. On tonight’s Chicago Fire season 8 episode 4 as per the NBC synopsis, “Part 1 of a three-show crossover event: A deadly bacteria takes its toll on numerous victims around the city, leaving Chicago’s finest first responders to work together alongside the CDC to resolve the dangerous situation. Following a fire at a local university that ties into the outbreak, Severide has suspicions that something bigger is happening.”

Tonight’s Chicago Fire season 8 episode 4 looks like it is going to be great and you won’t want to miss it.   While you’re waiting for our recap make sure to check out all our Chicago Fire recaps, news, spoilers & more, right here!

A man passed out in front of the stadium for the BEARS. Several members of Chicago’s first responders were enjoying a tailgate party there and so they were able to react to when they saw the man in distress. The guy wasn’t drunk. He didn’t smell of alcohol or anything like that and he did repeat something before he lost consciousness. He kept repeating the letters “BRT”. There wasn’t any explanation for it and so no one knew what he meant. He could have been trying to tell them his name for all they knew.

Only the doctors did want to know why he passed out. They checked him over and they noticed he has an unusual wound on his leg. His skin seemed as if it was torn open down there. It also looked like it was moving and so that was the first thing the doctors checked when he was finally taken to the hospital. It turns out the wound was infected with a flesh-eating bacteria. It wasn’t contagious and so the first responders were okay, but the police still needed to find out his name. They were going to run some facial recognition while everyone else went back to work.

Chicago Fire Department was usually busy around this time of year. They were on parade duty for October Fest and the paramedics were expecting to run into drunks. They didn’t know that they would be called to a scene like earlier. They responded to a 911 call that said a couple was distressed and unfortunately both husband and wife were dead when they found them. The couple showed signs of the same flesh-eating bacteria as before and this time it killed them. It was also a worrying sign because the paramedics were initially told this wasn’t contagious.

The first that caught it was Stuart Anderson. He just came back from the Peace Corps and he made have picked up something through there. The couple, however, seems to have stayed home. They didn’t come into contact with Stuart nor could they have gone anywhere they would have come into contact with the young man. Then there was the fourth case of this disease. There was an incident across town in which a mother and her baby both infected. They died within minutes of each other and everyone had been too afraid to touch them in case the disease continues to spread.

The authorities had to call in the CDC just to deal with the rapidly expanding cases. There was also fear in the city because everyone questioned if they would be next and so no one knew what would happen. They all just prayed the next part wouldn’t be too bad. The Fire Department was even thankful when they got a call about a fire a college building. They responded to it like any other and they saw that it had a basement lab. The same lab that had the words “BRT” on the door. Severide suspected this was what Stuart was talking about and it was poor timing that he never got time to fully investigate it while he was down there.

He and his team were chiefly thinking about the people trapped inside of the building. They had to break in through the glass interiors and then they had to treat the chemical fire that showing up as green fire. It was until finished putting out that they could warn the HAZMAT team. Severide told them about the first victim and how he was trying to warn them about BRT Health Industries. Chief Boden eventually followed up on this as well by talking to a professor at the laboratory. He found out that the lab was responsible for biological research and that his team could have been exposed to the diseases they were studying.

The firefighters had to be hosed down by the HAZMAT team before they could get out of their gear. It was the only way to clean them and it could have very well saved them from bioterrorism because that’s what it is. Boden had passed on what he found to Chicago PD who investigated it. They checked Stuart’s belongings and that’s how they found out he had been leaving threatening messages on the student message board. He even had a manifesto about an apocalyptic event. And unfortunately, he became a suspect for bioterrorism after his death.

There was no way of questioning him now. The police, therefore, had no idea how he was spreading the disease and so they tried working it like any other cases. They reached out to people at the lab who may have worked alongside Stuart. Hailey was doing just that when a woman collapsed into her arms and she found herself covered in the latest’s victim’s blood.