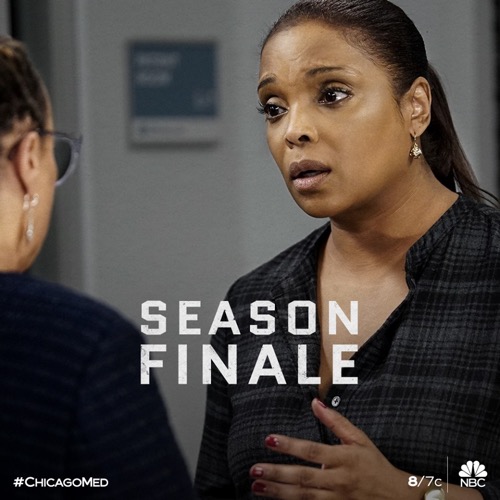 Tonight on NBC their medical drama Chicago Med airs with an all-new Wednesday, May 22, 2019, episode and we have your Chicago Med recap below. On tonight’s Chicago Med season 4 episode 21 called, “With a Brave Heart,” as per the NBC synopsis, “In the season finale, Dr. Charles and Caroline set some major plans. Ava fights to keep her relationship with Connor. Agent Lee informs Will of news that may put his life in danger.”

Dr. Charles didn’t want another moment with Cece to go by without getting remarried. He surprised her with tickets to Hawaii and said they could honeymoon there. It was where they wanted to go for their first wedding and never got around to visiting. So Charles was hoping to make up for it. He and Cece were both excited about getting married and she didn’t raise any objections for Hawaii, but their daughter Robyn didn’t think Cece was in a fit enough state to travel. She thought her mother is downplaying her symptoms in order to live in the moment with Charles and so Robyn tried talking to her dad. She brought up several points about how Cece shouldn’t be traveling and Charles shot them all down because he thought Robyn was overreacting.

Charles and Cece were going to be traveling first-class. He thought that he could see to all of Cece’s needs and so he dismissed his daughter’s concerns, but Robyn was just getting warmed up when Charles was called away. A patient of his had come in. Delmer Brendl suffers from anxiety as well as some depression and he didn’t want to go to the hospital because he didn’t want to go through all the tests. Del thought that the left side of his body being weaker than his right was merely a fluke and he had wanted to ignore it. Del was only convinced into doing tests at the hospital when his treating physician agreed that Charles could be in the room and so Charles kept his patient calm. It worked until Del learned that he has a brain tumor.

The position of the tumor meant that Del would have to have alert surgery. He would be awake as the surgeon drills into his skull and remove the tumor. Del hadn’t cared for that plan and he said that he didn’t want surgery. Del’s anxiety was now jeopardizing his life and so Charles agreed with his doctors to talk to Del. Del couldn’t let his fears led to his death and Charles felt like he could help. Charles always believed he can help and maybe that’s why his daughter Robyn was trying to bring back down to earth. She didn’t get through with her dad and so she tried comforting Dr. Rhodes. Rhodes has recently lost his father and had needed someone to turn to. He chose Robyn and it wasn’t long before he realized that Dr. Bekker was trying to use his grief as an opening.

Bekker has a twisted sense of love. She wanted to keep Rhodes in Chicago so she approached his dad and slept with him to get the man to donate money to the hospital for the hybrid OR. The hybrid OR was used to lure Rhodes back to Chicago and he had been happy with his new position, but he couldn’t stay in a relationship with a woman that slept with his father. He ended things with Bekker and she’s gone full bunny-boiling. She lied to Rhodes, manipulated him, and even cut herself in the middle of surgery on an HIV positive person because she thought she could guilt Rhodes into staying with her. None of it worked of course because by then Rhodes knew she was crazy and had tried to distance himself from her.

Rhodes didn’t want Bekker to perform surgery on his dad, but it happened when he couldn’t step in and he admittedly been a little relieved when his father surgery with her. It gave Rhodes the chance to talk to his dad and clear something up though it didn’t fix everything and so Rhodes has some regrets. He talked with the doctor that was performing the autopsy and she gave him a minute alone with his dad. He got to talk to him one last time and he was feeling grateful when the Medical Examiner asked to speak with him. It turns out that Rhodes’s dad died suspiciously. The man didn’t have diabetes and yet someone gave him the drug for it. It led to the older man dying prematurely and so the ME just wanted to warn Rhodes that she had to report his dad’s dad as suspicious if not murder.

Rhodes automatically suspected Bekker. She was the last person with his dad and she had been treating him when his dad suddenly went into heart failure. Only Rhodes couldn’t confront her right away. They had surgery together and Rhodes knew they needed to focus on their patient. The patient was baby Sophie Davis. Her mother died in labor and her father was lonely when he began dating Dr. Manning. Manning and Phillip Davis have even gotten serious. Phillip bought a ring and he showed it off to Rhodes. He said that if everything went well with his daughter’s surgery that he would propose to Manning and so Rhodes wished him the best of luck. He didn’t mention that she was recently engaged to Dr. Halstead because he didn’t want to ruin a special moment for a friend.

Manning deserves to be happy. She went through hell and back with Halstead, but things have turned around for her and she didn’t even need to worry about awkwardly working with Halstead. He just learned that Tim Burke was out of prison and so he was looking into relocating. So things were going well with Manning and Rhodes didn’t want to ruin that with the death of a baby. Baby Sophie has been through a lot and so Rhodes didn’t want to risk it. He was willing to stop the surgery if it meant that Sophie would live and it had been Bekker that talked him to take on the challenge. She said that she saw him do amazing things and that if anyone could make Sophie’s life better then it would be him.

Rhodes went ahead and he pulled off a miracle. He asked Bekker to close her up for him and he passed on the good news to Phillip. Phillip now felt like it was time to pursue things with Manning and meanwhile, Manning might have had a change of a heart. She worked a case with her ex-fiancée and they bonded over helping a couple through a rough time. It made Halstead realize that he didn’t want to relocate because he still loves Manning and it made Manning question if she should have given him another chance before calling it quits. And so a former couple were reconsidering things while there was a good man with a ring in his pocket.

Meanwhile, Charles helped Del through his surgery and the tumor was removed. Charles also realized that he needs to deal with his own fears and that meant he had to face the fact he could lose Cece. It made Charles have a better understanding of his daughter’s position and so he reached out to her. She helped him arrange a Hawaii themed wedding in Chicago and so that will be enough for him and Cece. It seems that all he needed was a fresh perspective and his work granted him that. It did the same for Dr. Choi. Choi meant a man who brought his girlfriend and his wife. The wife has Alzheimer’s and all three live together because they didn’t want to put the wife in a home. She got depressed there and both her husband and his girlfriend missed her. They brought her back home and she’s been doing well there.

This helped Choi to be more accepting when he found out that his sister Emily was going to be moving in with Bernie and his family. Bernie’s ex-wife and teenage daughter both wanted the best for Bernie. His near-death experience was a wake-up call for them all. It also gave Emily the support she so desperately needed and so Choi just accepted it. Choi also learned that April missed her last period and it looks now he was about to have a baby of his own.

Back at the hospital, Bekker told Rhodes that they could be together now that his dad was dead. She thought it was Rhodes’s father that was keeping them apart and so Rhodes quickly shut that down. He told her that they were never getting back together and Bekker went cold in an instant. She called Rhodes an “ungrateful prick” and walked away. And so now he truly believed she killed his dad.

Manning also ran after Halstead and got into his car because she was going to tell him that she still loves him, but then a car rammed them.

Manning was left bleeding and she may not survive.