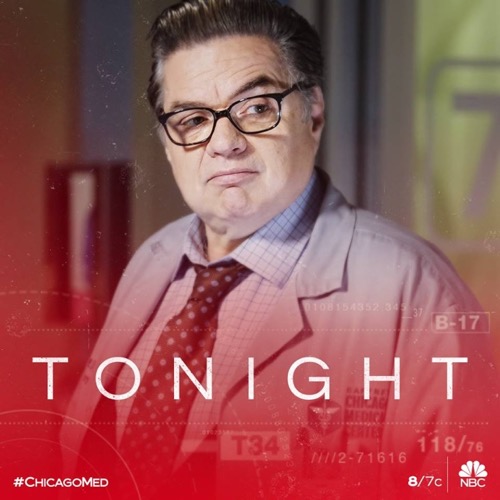 Tonight on NBC their medical drama Chicago Med airs with an all-new Wednesday, January 16, 2019, episode and we have your Chicago Med recap below. On tonight’s Chicago Med season 4 episode 11 called, “Who Can You Trust,” as per the NBC synopsis, “Will adjusts to hospital life in the aftermath of his recent undercover activities. Ethan and April’s personal relationship starts to interfere with their working situation. Dr. Charles and Dr. Manning collaborate on a patient suffering from Alzheimer’s. Dr. Rhodes and Dr. Bekker have a difference of opinion in dealing with a woman in desperate need of a kidney transplant”

Halstead hasn’t been himself since he returned. He got a gun where before he hated them and he was becoming aggressive with people. Even with Manning. Manning told her fiancé that he couldn’t stay at the house if he wanted to keep his gun and he took that to mean that she was kicking him out when she wasn’t. She just wanted things to return to normal and she could see that something was off with Halstead. He wasn’t acting like himself and so Manning suggested that he maybe see someone. He needed to able to talk about what he went through and burying it wasn’t helpful for anyone. Not when Halstead clearly needed more.

Halstead could have gone to see someone at the hospital, but he didn’t want to admit that he had a problem just yet and so he chose to bury it in his work. The first patient he saw was a pregnant woman. She was suffering from asthma and was pregnant with twins. The twins weren’t hers because she was acting as a surrogate and she said she didn’t want to worry the biological parents if she didn’t have to except Halstead believed she should call them. The parents deserved to know that something was potentially wrong with one of the babies. The baby boy was kicking the surrogate so much because there was a problem with his amniotic fluid.

It could be normal in the case of twins, but Halstead wanted to be safe and so that’s why he asked that his patient call whoever she needed to while they check on the baby boy and baby girl. Meanwhile, there was also an issue with a man that Choi and his girlfriend ran into on the street. They had both noticed a man yelling at someone for pushing his wheelchair and so they went over to him to check on him when they saw that his leg had developed gangrene. He had needed to be rushed to the hospital because there was a possibility he could lose his leg if it was treated in time. And so the couple both went to the hospital where they ran into April.

April was the nurse assigned to Choi’s case and she clearly had a problem with listening to suggestions if they came from his new girlfriend. Whenever she had an idea or wanted to hear test results, April shut her down until it was uncomfortable for everyone. The girlfriend eventually left and that’s when Choi asked April what was up with her attitude. She claimed that she was only following policy and so Choi had to let it go or risking turning into something bigger than it was but they both knew that April treated Vicky unfairly. The other woman just wanted to see for herself that the guy she helped was going to be okay and so there was really no reason to bite her head off.

As for Halstead’s patient, Selene and the biological parents were later informed that both babies were in distress. There was a chance that it could improve over time and there was also a chance that it could worsen. Halstead suggested that they have surgery to protect the one baby that they could help and so both Nate and Stephanie agreed to do it. They’ve been trying for children for a very long time and all they wanted to do became parents. They had made the decision and they thought Selene would go through it because she was just the surrogate however Selene didn’t want to risk one baby to save the other and she refused to have surgery.

The case became a legal matter after Selene refused surgery. She had signed a contract that said she agreed to whatever medical decisions the biological parents decided and so technically she could be sued for breach of contract, but Nate and Stephanie didn’t want money. They wanted a baby! They brought their lawyer to talk to Selene and the lawyer was proving all to willing to bully Selene when Halstead intervene. He told the lawyer she had to get out because she was upsetting his patient and so the biological parents demanded a new doctor. Halstead didn’t want to leave Selene and he was about to fight the couple when Goodwin decided that it would best for everyone if Halstead was reassigned.

Halstead was taken off the case and it was given to someone else. Someone who would stay in their line as the doctor and leave the decisions to the biological parents. Halstead knew that no one would speak up for Selene and the injustice of it had hit a little too close to home for him. He threw something of a tantrum and he decided to ignore orders by talking to Selene again, but Halstead wasn’t alone in throwing a fit.  It turns out that Choi was just as capable. His patient was too sick to get more blood bags and Choi was going to ignore that because he thought his patient deserved a break.

His patient was a veteran who had a Silver Star. He served his country and Choi thought that they should fight for him, but there was just too many things that needed fixing and so the patient died. Choi should have accepted that he did everything he could for the guy and instead he chose to blame April. April had called Dr. Lanik and she had told Choi that he couldn’t have more blood bags. She had followed the rules to the letter and Choi scoffed about why she suddenly became such a rule follower. He thought that April was trying to get back at him and he accused her of sabotaging his patient. And so Maggie had to step in to stop their argument.

Then there was Rhodes. Rhodes was dating Bekker and he was so under her thrall that he believed her when she said his father was making up nasty rumors about her, but they weren’t rumors. Bekker slept with Rhodes father and had lied about it in order to keep Rhodes. He believed her and he was all about people shouldn’t have to forgive their loved ones if they didn’t have to when his patient ended up needing the opposite. The patient needed a new liver and she didn’t want to accept it from her sister because the sister has accidentally killed her daughter. And so Rhodes respected the decision while Bekker did not.

Bekker went behind the patient’s back and Dr. Rhodes to ensure that the patient still received her sister’s liver. But Rhodes did find out. He figured it out when their public appeal worked so soon and so he confronted Bekker. She didn’t apologize and she said that the end justified the means. And after Rhodes saw another side of her, he decided to go and ask his father what really happened.

Halstead meanwhile had talked Selene into going through with an alternative surgery and that surgery worked. Both babies began to recover and Halstead thought everything was back to normal, but both Goodwin and Manning had talked to Charles and it was decided that Halstead would go through mandatory therapy. He hadn’t liked that and he blamed Manning for what happened.

But Choi was at least contrite and so he went to say he was sorry to April but ended up kissing her.