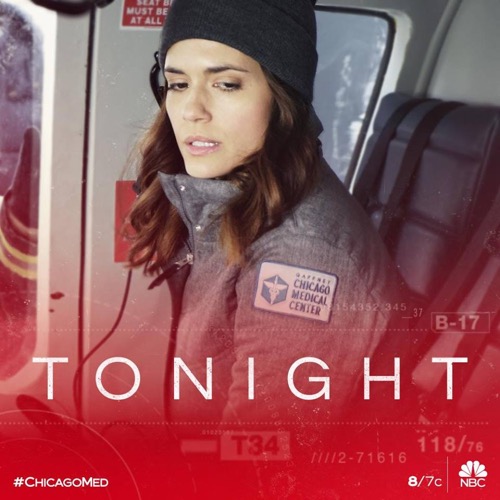 Tonight on NBC their medical drama Chicago Med airs with an all-new Wednesday, January 23, 2019, episode and we have your Chicago Med recap below. On tonight’s Chicago Med season 4 episode 12 called, “The Things We Do,” as per the NBC synopsis, “Dr. Halstead rushes to rescue Dr. Manning after she is involved in a Medevac helicopter crash. The personal drama between Dr. Rhodes and Dr. Bekker boils over. Dr. Charles and Dr. Choi work to help a patient come to terms with their addiction. April helps Elsa deal with the loss of her first patient.”

Dr. Manning was involved in an accident. She had been flying with a patient that needed to be transferred when their helicopter hit some turbulence and was forced to land. They landed in the middle of nowhere and the bottom of a valley. They were going to need to be rescued before they could move, but there had also been a few things onboard that were messed up when they got knocked out of the air and so Manning called the hospital for some much-needed supplies. She needed a new oxygenator or her patient wasn’t going to make it and that wasn’t something the Chicago Fire Department was going to bring. It had to be someone from the hospital and unfortunately, it was Dr. Halstead.

Halstead volunteered to go the moment he heard that it was Manning in trouble. She was the love of his life and the two were supposed to get married, but circumstances and how those circumstances ended up affecting Halstead came between them. He had pushed Manning away because he was angry and it was easier to be angry at her than it was to confront the problem. But that meant he hasn’t been speaking to Manning in a while and so her accident woke him up. Halstead rushed with the new oxygenator to the scene and he didn’t even want to wait for the Fire Department to go down there first. He said the risks didn’t matter and he went rushing to Manning’s side where she hadn’t been happy to see him.

Manning was happy to get her hands on a new device for her patient, but she didn’t want to talk to Halstead or take orders from him. Halstead was just so worried. He wanted to check on her arm that came out of its socket and he was only able to convince Manning into letting him help by saying that she wasn’t at her best for her patient. She got snapped out of her attitude after that. Manning agreed to let Halstead put her arm back in and she immediately went to her patient once it was in place. She didn’t care about anything else besides her patient and so it was almost as if Halstead wasn’t there. It didn’t matter that he went to her side when he heard she was in trouble and he knew then that their problems were bigger than he thought.

Back at the hospital, Choi was handling the case that should have gone to Halstead. Halstead had traded with him because he wanted to be with Manning and so the case that Choi had as well as the patient was all on another doctor. No one knew that Bruce Greene would be difficult. He came in feeling sick and had brought his family. His wife and son had been worried about Bruce and so Choi checked on his patient first though he later needed to send Jessie on a run with a nurse because the kid didn’t need to hear what he had to say. Choi believed that Bruce was suffering from liver failure. He asked Bruce about his lifestyle and he quickly identified the reason why a relatively young man was losing his liver. It turns out Bruce was an alcoholic.

Bruce didn’t want to admit that he was an alcoholic and so his wife Carol had to tell the doctor. Choi had tried to be understanding, but he asked Charles got to talk to the family because he thought the psychiatrist could help Bruce realize that he need help. It seemed to work because Bruce said that he would quit for his family and so it was only Charles that was concerned. He noticed that Bruce’s son changed his story about how he broke his arm and he realized that the family may have some deeper issues than just the drinking. He made sure to stay close by and so he had been there when Bruce’s condition took a turn for the rose. The man had somehow snuck in alcohol and the drinking combined with his new medication caused him to throw up blood.

It was very graphic and it clearly affected Carol. She found the bottle that Bruce had hidden and began yelling at her husband she believes he deserves to get sick for going back on his promise to get sober. Carol figured she was done with Bruce and she looked around but couldn’t find her son and no one knew if the little boy witnessed the whole episode. Carol and the doctors put out an alert for Jessie. They were looking for a kid that probably was scared and Charles was sacred himself. He began connecting the dots and he thought Jessie might hurt himself. It’s what he’s done before with how his hurt arm and so Charles went to the roof. He found Jessie sitting on the ledge and he told him that understood that Jessie was just trying in his own way to deal with his father’s drinking.

Charles has been trying to be there to help people before they could even ask for it, but while he may have won with Jessie, he failed with the student doctor. Curry thought she could distance herself from the realities of pain and grief. Only her plan was never going to work forever. She soon met a patient who had been funny and sweet. He had a routine surgery and he still died because he had an allergy he wasn’t aware of. It wasn’t something that Curry could have foreseen and she still ended up blaming herself because she thought she should have caught it. She should have paid more attention to how the patient was reacting to his medication and the fact she missed and couldn’t even comfort his widow stayed with her.

Dr. Rhodes in the meantime finally had out with Bekker. She had slept with his father to get the old man to pay for the hybrid OR and it wasn’t something that Rhodes could forgive. He doesn’t like manipulation and he thinks that’s what Bekker did with her stunt. She hadn’t cared that Rhodes was leaving town or that he had made a decision he was willing to live with. He was instead pushed into taking what she wanted him to do and its something his family has done in the past. Rhodes never wanted to go back to that and it was why he became so easily agitated when his patient who has Down Syndrome was forced into a surgery she didn’t want. She was pregnant and was told she could lose her baby if she went ahead with surgery on her heart. And so her mother who had power of attorney decided to force it on her.

Bekker had agreed with the mother and so she had been shocked when Rhodes made sure that the baby survived surgery but Rhodes hadn’t wanted to take that away from his patient. She got to keep her baby and her mother was going to have to help her raise it. After the surgery, Bekker again claimed that she hadn’t slept with Rhodes’s father and that his father lied to hurt him. She tried to tell Rhodes that she wouldn’t have lied about something so big though he didn’t know if he could believe her once he’s seen for herself that she firmly goes with the end justifies the mean.

And while Halstead was eventually able to get back into Manning’s good graces by being there to support her, he was still keeping secrets and he wasn’t going to get rid of the gun like he said he would.