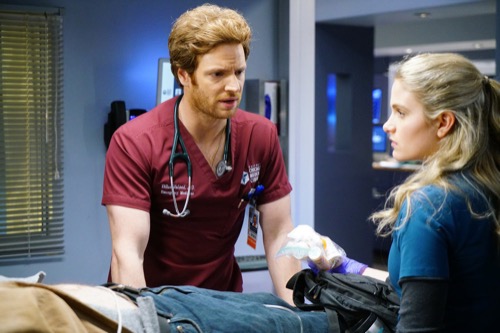 Tonight on NBC their medical drama Chicago Med airs with an all-new Wednesday, February 20, 2019, episode and we have your Chicago Med recap below. On tonight’s Chicago Med season 4 episode 15 called, “We Hold These Truths,” as per the NBC synopsis, “After witnessing a pick-up truck plow through a street fair, Natalie and Maggie are forced to make some tough decisions on the fly. The doctors and nurses of Chicago Med find themselves on high alert with the influx of patients arriving in need of aid. Dr. Charles ex-wife comes to town with news.”

Dr. Manning and Maggie had decided to go to a street fair. They both thought anyone brave enough to host a fair in the middle of winter had their attention and so they had been happy to walk around in the freezing cold. As they were searching for something either of them would like, they got to talking. They talked about Manning’s situation with a patient. The patient was a baby and all the baby had was her father because her mother had died in childbirth. Manning had wanted to support the family of two by keeping an eye on them through the doctor took things a little too far when she handed out her cell phone number. She worked in the ER and she didn’t normally get overly involved with cases. And so Maggie wanted to know why this was different.

Maggie had no room to talk because she donated her kidney to a patient she barely knew, but she still wanted to know why Manning took a personal interest in this one case and she had been waiting for an answer when they heard the screams. They heard the crowd begin to scream and got away of an oncoming car. The car plowed into people. There were some in critical condition and others that were lucky to be able to stand upright. Manning and Maggie as medical professionals moved to treat everyone. They had commandeered a restaurant across the street from the fair to treat patients that couldn’t wait for an ambulance and they had been doing a commendable job until they were told they couldn’t move from the restaurant.

The Fire Department had checked the car involved. They were able to send the unconscious driver to the hospital and so they thought they just had to work on stopping the car from catching fire, but it seems the “accident” hadn’t been an accident at all. The driver had purposely driven into that crowd and he was carrying around a bomb in his vehicle. The Fire Department found the bomb and they had to clear the area. No one coming in or out until the bomb squad got there. So Manning and Maggie were basically going to be the only medical professionals around while the situation outside clear itself. The two began splitting the victims into different groups. Like those needed treatment now and those that they could sit on.

Meanwhile, the hospital treated all those that were transferred. Charles and Halstead had even talked to the driver and he wasn’t remorseful in the slightest. He claimed he had to do something because they were erasing his culture (meaning the white culture). The driver was a white supremacist. He targeted the large group of people at the fair because he knew it would be full of minorities. The driver bragged about killing those people and so the doctors reported it. They told the police and the guy was transported to the prison ward of the hospital. The last he saw of the ER was April telling him that “yes, she was one of those bossy blacks” and that she was the chief nurse. And so he had a complaint about that as well.

The rest of the hospital dealt with the patients that truly mattered. There was a young woman named Jada Harris who went to the fair with her mother to celebrate getting into Northwestern, but unfortunately, she took the brunt of the car and was later reported brain dead. Her mother was asked about donating Jada’s organs because there were people on donor list that have waited years for a match and at first her mother had liked the idea. She had no problem with donating the organs until she found out she couldn’t choose who they went to. Ms. Harris and her daughter were both blacks. She wanted Jada’s organs to go to another black person and when she learned that the organs go to whoever is on top of the list she then changed her mind because she didn’t want a possible racist to benefit from her daughter’s death.

One of the people that would have received a donation was Francis Buckley. He was at the same hospital as Jada and he was awaiting a new heart, but because he was white he couldn’t get one from Jada. Not when her mother was wanting to take a stand. The woman had found out what happened with the driver that killed her daughter and she believes her daughter’s sacrifice needed to mean something in the grander picture. She wanted the organs to go to black people like herself because it was easier for her to envision her daughter living on. And so Ms. Harris couldn’t be swayed by anything or anyone, Goodwin tried to get her to calm down and see that she was hurting Jada’s legacy by making it about color except Harris didn’t want to back down.

Then there was another victim of the accident who died and left behind a young son. The son at least has a support system in place to look after him, but it had been hard for Charles to see devastation wherever he looked. It didn’t help that his ex-wife Cece was in town with their daughter Robin. It turns out Cece’s cancer was back and so he offered to support her through treatment. He also wanted her to use his hospital and that meant both women ran into Rhodes. Rhodes had been happy to see Robin again and he got the chance to finally meet Cece. Cece and Charles faced a lot of grief from their parents when they wanted to get married and so being in an interracial relationship have given them perspective on the tragedy.

Charles hasn’t seen his mother since he married Cece and so he thought now was the time to finally reach out because he wanted her to meet her granddaughter.

Manning and Maggie pulled through their crisis though Maggie needed to be hospitalized for splitting her stitches. But both women realized now was the time to follow their hearts and that meant Maggie was quiet as Manning answered another phone call from Phillip.