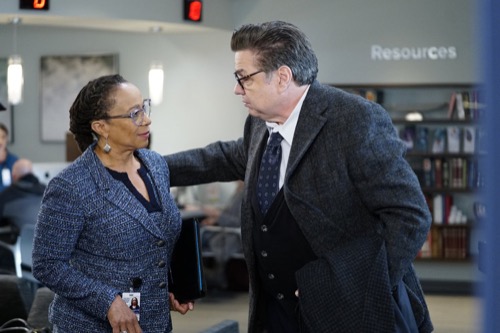 Tonight on NBC their medical drama Chicago Med airs with an all-new Wednesday, February 27, 2019, episode and we have your Chicago Med recap below. On tonight’s Chicago Med season 4 episode 16 called, “Old Flames, New Sparks,” as per the NBC synopsis, “Natalie and Will grow further apart. Dr. Charles struggles to come to terms with his feelings toward his ex-wife. The personal issues between Dr. Rhodes and Dr. Bekker continue to cause problems at the hospital. ”

Dr. Charles had to be there for his daughter as she faced the possibility of losing her mother. Her mother Cece was fighting cancer and unfortunately, the treatment did more harm than good. Cece’s heart has begun to fail and to treat that would mean she couldn’t be in the clinical trial for her cancer, but Robin didn’t want to lose her mother and she didn’t listen as her father or her ex-boyfriend convinced her now wasn’t the time to turn to alternative methods. She believed she could save her mother with a risky procedure and she did her best to guilt trip Dr. Rhodes into going along with her idea.

Rhodes would need to perform surgery on an already ill woman. It was a huge risk and Rhodes had tried to tell her that her mother could die in surgery if they went ahead, but she didn’t want to think of those odds. She was told that her mother could have years with the clinical trial and so put all of her focus towards making them happen. Robin demanded that her mother have the surgery to fix her heart and if Rhodes wasn’t going to help when she was going to turn to Bekker. Bekker and Rhodes had a nasty breakup. He still refused to talk to the woman if he didn’t have to and that’s why she was fine with poaching his patient.

Bekker told Robin she would do the surgery on Cece and then Rhodes had gotten wind of it. He found out from Charles what Bekker did and he said that he wouldn’t want his patient to have the surgery without him being in the room. Rhodes changed the mind about performing the whole thing because he hadn’t trusted Bekker to keep his patient alive. Anything could happen in the surgery and it didn’t help that Bekker was crazy. She nearly gave herself HIV to get Rhodes back and she could be thinking of killing Robin’s mother as a way to stop Robin from getting back together with Rhodes.

It was all very melodramatic. Ms. Goodwin demanded that the doctors act professionally when they were at work and so she didn’t care if they did collaborate for Cece’s surgery. She just wanted Cece to have whatever care she wanted. Cece, unfortunately, wanted what her daughter pushed on her. She said okay to the surgery and she was about to be wheeled away when Charles decided to talk to her. Cece recognized the look on his face as his shrink face and so he knew what Charles wanted to say. He wanted to tell her that she didn’t have to do this and that if she could always say “no”, but it was her baby that begged her to do the surgery and how she could say “no” to her baby.

Cece was in a situation not of her making and dealing with it the best way she knew how. But not every parent would do the same. There was a young family at the hospital. The Cranmers had two sons and one was apparently born to save the other. Their eldest son Thomas had developed cancer when he was a toddler and to save his life his parents created his perfect match via in vitro. They created their son Gavin to save Thomas and this didn’t end at birth. Thomas was still struggling to stay alive. He had needed blood, tissue, and even a kidney. All of which was taken from Gavin to preserve Thomas’s life for just a little while longer.

Thomas has recently developed an infection that means he was going to need bone marrow and so his parents once again turned to Gavin, but Gavin hadn’t wanted to do it. He had found out he would have to be put under and he experienced a bad reaction last time. Gavin had felt like he couldn’t breathe and was going to died last time. He didn’t want to go through that again and so at first he said “no”. He had his doctor, Dr. Choi, break the news to his parents and his parents had been livid. They thought that Choi must have said something to Gavin to get him to change his mind and all he did was give the little boy some honesty.

The parents had wanted to force Gavin into doing as they asked and they couldn’t because he still had legal rights over his own body, but then Thomas got sicker and his parents went back to Gavin begging him to save his brother’s life. They said Thomas would die without him and so Gavin changed his mind. He agreed to do the surgery and he wouldn’t tell his doctors or Goodwin that he had been coerced. Meaning they had no recourse to stop the surgery. They had to let it go ahead and it would have if Thomas hadn’t put his foot down. Thomas had only gotten sick because he stopped taking his meds. He said he was tired of fighting and that he didn’t want to hurt his little brother anymore.

Thomas wanted to die and he demanded that his parents let him. He was sick of fighting and he thought that Gavin deserved a chance at a normal life. It was the first time someone in their family had thought about Gavin and Gavin had loved him for it. The little boy even tried to tell Thomas that he wasn’t scared of the surgery anymore and that he couldn’t still do it, but Thomas didn’t want him to. He convinced his family to let him slip away and his courage had made an impact on his doctor. Choi didn’t want to pursue things with Vicki if he wasn’t quite over April and so he pressed pause on meeting Vicki’s parents.

Meanwhile, Cece made it through her surgery but just barely and so her family was happy and Rhodes was the only one that was concerned about how’ll Cece recover following her surgery.

The doctors go through things every day when they gain a new patient or lose someone, but if they were lucky like Halstead then they go through their experience before they make fools of themselves by fighting for Manning when he knew he needed to move on.