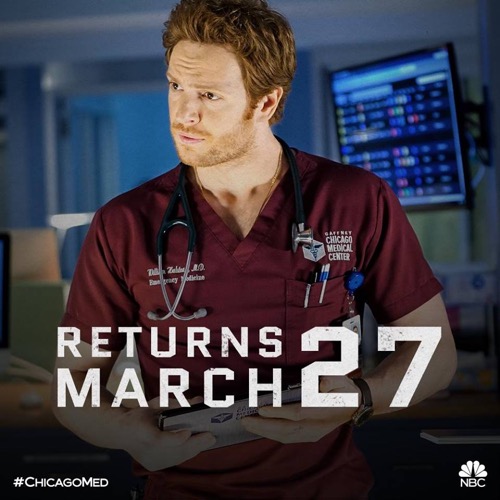 Tonight on NBC their medical drama Chicago Med airs with an all-new Wednesday, March 27, 2019, episode and we have your Chicago Med recap below. On tonight’s Chicago Med season 4 episode 17 called, “The Space Between Us,” as per the NBC synopsis, “A car unexpectedly smashes through the ambulance bay doors, forcing Dr. Choi to make some difficult decisions in an effort to save a worker trapped beneath the wreckage and April, who’s also in danger.

Someone crashed through the front door of the hospital. The driver lost consciousness and drove right through the hospital endangering everyone. He even pinned one man under his car. His victim was Don and he was an orderly at the hospital. There was no safe way to get Don out of from under the car because his foot was under a wheel, but April didn’t want Don to face the extraction alone and she went under the car. It was spectacular dangerous for April to be under there at the same time and yet she didn’t want to leave her friend. She stayed with Don as the Fire Department came to assess the situation and there were countless times when Dr. Choi asked April to come out from under the car. She has people care about her too and none of them wanted to see her hurt.

April refused to budge. She didn’t even want to Dr. Choi and she knew that their relationship was a complicated one because they used to date. The pair also still have feelings for each other, but it wasn’t one thing then it was another keeping them apart. Dr. Choi had this girlfriend that he was serious about and he ended things with her because he didn’t want to commit someone when he still has feelings for April. There was just one problem with pursuing April and that was the woman, herself. April has been called into question several times over her bitter feelings regarded Choi and so it was right as she was ready to move on from him that he was ready to fight her. Eventually, April got sick of the drama and she realized she should be focusing on the people she could save.

April truly cares about her patients and she didn’t want to lose Don. Don was scared and there was no one comforting him because they thought getting him out should be their main concern, but what would happen if he gave up before then? April was the only one that would consider this much less climbed under a car to make him feel like he wasn’t so alone. She wanted to be with Don through the whole thing and she tried to get Choi to see it from her side. April tried to tell Choi that she would never leave Don behind and so Choi decided to risk it all to save them both. He tried to give Don some blood and unfortunately the man had a bad reaction. Don couldn’t accept a transfusion and his pressure must so sorely be too high to be safe. And still, Choi sent for Dr. Rhodes.

Rhodes had been seeing to the driver. Mr. Nichols wasn’t feeling well when he tried to drive himself to the hospital and that’s when he lost consciousness. It turns out he has a growth that wasn’t cancerous but was giving mini-strokes and he was going to need a new heart. The doctors had wanted to wait for this heart before they remove the growth and it had been the patient that insisted. He said he didn’t want to risk another stroke in case the next one kills him and so he talked his doctors into a risky procedure that could have been delayed. Rhodes was carrying out the surgery when the patient began to experience complications and so Rhodes had wanted to stay except he was needed with Don. So he handed over the patient to Bekker.

Rhodes got to Don and by then they could all see that Don was in bad shape. He was so weak that he could easily pass in surgery and there was no one that was angrier about that than April. She thinks that Choi did his best to keep her safe rather than focus on the patient, but she told him she wasn’t his concern and he should have risked the car falling on them if it got Don out of there quicker. This was April at her most irrational and there was nothing Choi could have said to make it better. He did everything he could to keep Don alive and he wasn’t going to do that at someone else’s expense. April could have been injured or worse she could have died. It’s not what Don would have wanted and so just shouting about it was way for April to make herself feel better.

April made things worse by getting in the way of the people treating Don and that’s why she was lashing out, but what she said got to Choi and he accepted full responsibility if Don dies with Goodwin. Only Goodwin wasn’t going to hold his decisions against him. Not when she heard from officials that Choi did everything by the book and that he tried to save two lives rather than one. Goodwin let Choi know that whatever happens wasn’t his fault and it was true. Dr. Choi acted like any other doctor. It made no less moralistic than say, Halstead or Manning. Those two had had a young man with cystic fibrosis and he turned out to be too sick for his lung transplant. His girlfriend, on the other hand, had the same condition and she was up next on the donor list. Manning and Halstead allowed them to be in the same room as each other as long as the girlfriend agreed to do the surgery and so she hadn’t been there when the boy she loves did pass away in the middle of the night.

It might not have been fair to play on someone’s feelings, but it helped save a life. Manning and Halstead weren’t together anymore either and they were on much firmer ground now as friends. April later apologized to Choi for trying to put the blame on him and they were able to be in the same room without fighting. But Rhodes pulled off a miracle when he was able to save both men involved in the accident. He had used this new procedure that he had gotten from Robin to save Mr. Nichols’s life and it should be a great thing in medicine yet Bekker hated to see him grow closer with his ex and she might do something radical again to gain his attention.