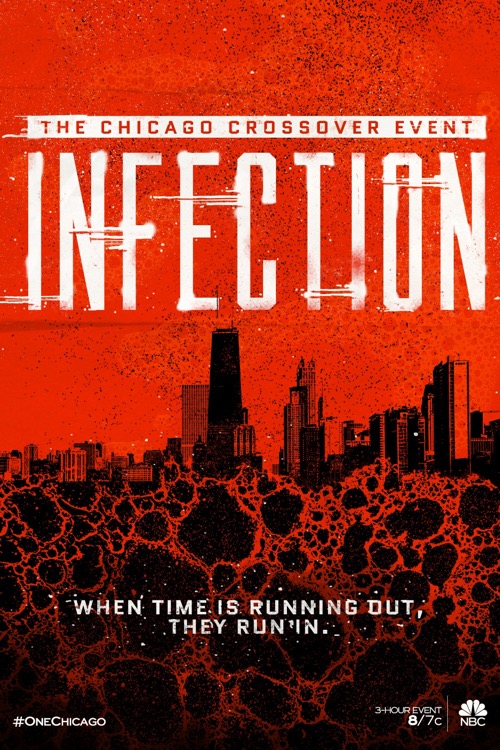 Tonight on NBC their medical drama Chicago Med airs with an all-new Tuesday, October 16, 2019, episode and we have your Chicago Med recap below. On tonight’s Chicago Med season 5 episode 4 called, “Infection, Part 2,” as per the NBC synopsis, “Part 2 of a three-show crossover event: An entire apartment complex is forced into quarantine when cases of the deadly virus turn into an epidemic. P.D. chases a lead that could point to a case of bioterrorism and Will gets dangerously close to the suspect.”

Sharon gives a press conference and announces that in the past 48 hours they have treated several cases of flesh-eating bacteria. Haley is being checked over by Victoria to see if she is infected because of the girl she brought in. Haley has a hangnail that she bit, could she get infected?

In the operating room, they lose a patient, it is Victoria.

Ethan introduces Dr. Andrea Dano from CBC to Sharon. Will knows her, they were bio majors together. Andrea tells Sharon that their goals are containment and treatment, to prevent death and eliminate the spreading of infection. Sharon tells Will to help her.

Ambulances are rushing to the apartment complex, there is another call. Two women are found, one looks like she is having a seizure. Chief Boden is at the hospital and he tells Will and Andrea that they just got five cases on a single floor, so it doesn’t make sense that Sharon said the infection can only be caused by an open wound. Andrea says that clearly there are other ways of spreading the infection, Chief Boden can’t believe they don’t know and he is not happy putting his staff in danger. Andrea tells Will that they have to treat that building like ground zero.

Maggie tells Sharon that there may be upward of thirty cases.
The apartment is quarantined, one lady, Charlene Hughes doesn’t want to leave the apartment, Ethan tells her she has no choice, or the police will remove her.

They have everyone quarantined, Charlene tells Daniel that it is biochemical.

A man walks into the police department, he went for an interview for a babysitting job and an exterminator wanted to spray the apartment, but the woman who was interviewing him didn’t want him to because she had a baby.

All of the victims have come from the CCU lab or the apartment building. Voight and his people are on the case and he wants them to get more information on the exterminator and where he got his products.

Will just heard from his brother, he tells him that they think everyone got infected from a bug spray and this is an act of terrorism.

Will and Andrea are in the lab, she tells him that she is in the middle of a very ugly divorce. They are both looking at a sample and are shocked that it is reproducing so quickly.

Voight is in a meeting with Sharon and Daniel, he says he wants to interview the people who live in that building. The key to this whole thing could be in that group, he has to talk to them.

Voight puts Hailey on the job with Daniel to ask questions. Daniel tells her that he wants to take another crack at Charlene, but he wants to do it alone.

Will and Andrea call specialists in from the University, they recognize the staff immediately as E87. They were cultivating it for research, to develop antibiotics to fight this kind of infection but everything was destroyed in the fire.

Daniel goes to speak to Charlene, she thinks it is the CIA who did this. He asks her how she figured it out, she says she sees everything – he wasn’t a real exterminator, it was so obvious, a blue van with a silver circle. In quarantine, a man is infected and starts to shout that he is infected. Haley tries to calm a young girl, Amanda, who is in quarantine with her.

Voight has the information about the van, he has his people on it. In the operating room, the virus just keeps spreading, right to the bone.

Sharon and David watch ten seconds of a ten-minute interview she gave, all the news channels are doing is spreading fear. Sharon is upset, nine people have died. In quarantine, the people are also getting upset, Charlene is shouting. “let me out” and she runs out – people start to follow her and there is panic everyone in quarantine. Haley tells Amanda to stay put, they are safe there.
Kevin arrives at the hospital, Sharon tells him that he needs to find the people that left, if they are carriers, they are putting the city at risk. Meanwhile, Marcel talks to a patient who he amputated his arm because of the infection.

The city is on the verge of a meltdown, the mayor’s office shows up at the hospital and tries to put pressure on Sharon but she won’t have it. Haley finds out that she is not infected, she gives the good news to Amanda and tells her that she is proof, not everyone is going to contract the bacteria. Amanda is worried, she doesn’t know where her grandmother is and her leg is burning, Amanda could be infected as well.

Voight thinks he may have found the exterminator, while Will, Andrea and the university doctors are in the lab and still have no success.

Amanda is infected and it’s spreading. Natalie is with her and tells her to just keep breathing, they are going to take care of this. Amanda is terrified, she asks Natalie if she is going to die, she says no, they caught it early.