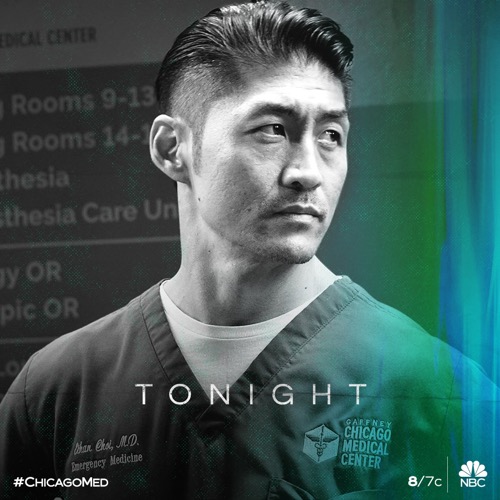 Tonight on NBC their medical drama Chicago Med airs with an all-new Wednesday, November 6, 2019, episode and we have your Chicago Med recap below. On tonight’s Chicago Med season 5 episode 7 called, “Who Knows What Tomorrow Brings,” as per the NBC synopsis, “Dr. Charles and Dr. Halstead sink their teeth into a bloodthirsty case; Dr. Marcel and Maggie throw a traditional crawfish boil for the staff and new relationship blossoms.”

April and Dr. Choi were trying for a baby. They tried it the natural way and it just didn’t seem to be working for them. April wasn’t pregnant. She may have thought she was here and there, but she wasn’t pregnant, and their window was closing. The couple wasn’t exactly young. They were getting up there in age and wanted they wanted was slowly moving away from them. Choi tried to stem the tides by planning things around April’s fertility. He charted it down and he was even cooking differently in the hopes that it improves her ovarian health.

Choi was also being a little extra. His girlfriend didn’t want to feel like she had to chart her every cycle and she sure didn’t want to schedule when they were going to have sex. She didn’t think any of that was romantic. Only April thought Choi would snap out of it. She gave him some space because she thought that’s what he needed and he hadn’t taken the hint. He still had a baby on the brain at work. He along with everyone else was treating patients and today wasn’t a good day for anyone.

Halstead saw a young man with fangs come in. The guy was deathly pale and he suffering from some ailment because he kept getting sick. Halstead ran some tests. The later results showed that Tom was suffering from liver failure and that he needed to be treated now before his liver itself became useless. Halstead told Tom as much and he could have gotten somewhere with him if it hadn’t been for Tom’s girlfriend. The woman was bossy! She didn’t care about Tom’s symptoms and she demanded that he leave the hospital with her.

There was nothing Halstead could do about it. He literally could not speak in front of the girlfriend without her jumping down his throat and so Halstead tried some unconventional means. He went to Dr. Charles. It wasn’t what his patient asked for and it ticked off the girlfriend even further. Not that Halstead cared. He wanted to save Tom’s life and he got Dr. Charles involved because he thought the kid needed a psych eval. And as luck would have it, Dr. Charles came to the same decision as well when he told Tom he could die and the guy said he was already.

Tom and his girlfriend believe they’re vampires. They weren’t worried about death because they thought they were dead already and they tried to make a run for it when the doctors threatened to hold Tom. Tom and his girlfriend and Tom were easily caught because he was still weak. He was also burning up in the sun with a rare rash. It turns out Tom has a sensitivity to the sun. He doesn’t believe he has a medical condition or that he can die and the longer he spoke the worst everyone began to feel.

Tom was brainwashed by his girlfriend. She truly made him believe that the doctors would want to cut him open and study the first case of vampirism. She so had him under her thrall that Dr. Charles knew he could never reach him. He said Tom’s passive attitude was working against them and that there might not be a chance to save him from himself. The doctors were giving up in one case and fighting in another. Choi and April were treating a soldier that was technically AWOL. The sergeant had come to Chicago for her sister’s wedding and she didn’t want to miss it.

Its why Gina didn’t tell her doctors at Walter Reed. She was a part of a program for new prosthetics and the army invested a lot in her new arm. They didn’t want her just walking around with it. They wanted to monitor her and for once she chose to do something for herself rather than something for the experiment. Gina’s secret wouldn’t even have come out if she hadn’t developed an infection. She was sick and Choi used that as an excuse to report her. He said that he called her army doctor to get the details about her case and yet April didn’t believe him.

She knows her man. He was military proud and he called Gina’s doctor because he wanted to report without really reporting her. Choi seems to be focusing on the wrong things lately. He made a mistake with all those charts and he committed another mistake when the military came storming into the hospital. They wanted to arrest and transfer Gina. They didn’t care that her arm was infected or that she needed immediate surgery. They merely wanted to drag her out of there. So, Choi had to fix what he did.

He rushed Gina into surgery because he knew that it would derail her transfer. He then did everything possible to stop the military for arresting her and at the same time, he knew it was inevitable. The military was always going to arrest her for what she did. Its why Choi shouldn’t have called them and so no wonder April was flirting with someone else. She was in the Operating Room with Dr. Marcel and they were talking about the party he was having with Maggie. It was going to be a crawfish boil. Everyone was invited and Marcel promised to make April a special drink. And she was more interested in having that drink than she was in making Choi feel better about himself.

Charles meanwhile had gotten through to Tom. He explained how the girlfriend ran off and how she wasn’t coming back despite being so concerned about him. Tom then tried to call Kirsten, but it seems she’s blocked him, so Tom quickly became disillusioned with her lifestyle. He accepted help from Halstead and they treated him for hepatitis he got from his girlfriend as a goodbye present. Charles also had to be treated for that because Kirsten beat him as she escaped from the hospital and so he ended up missing the crawfish boil.

Halstead still went. He even ran into Student Doctor Curry and he was there for her after a very bad day. She lost a patient and the patient was a child. Curry was usually very restrained, only she lost it when the patient died. She said she was so contained because she felt so much and Manning tried to be there for her. It just wasn’t as good as when Halstead was there to comfort her. The two bonded over how to eat crawfish together and they had a moment.

Even as the rest of the day hadn’t been half as nice.

Choi came around and he promised April he’d throw away the charts, but she had almost kissed Marcel and so maybe having a baby isn’t a good idea right now.