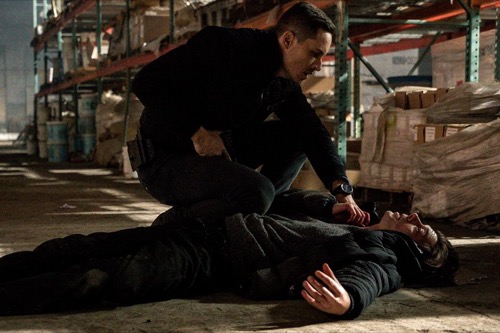 Tonight on NBC their drama Chicago PD returns with an all-new Wednesday, January 23, 2018, season 6 episode 12 called, “Outrage,” and we have your Chicago PD recap below. On tonight’s Chicago PD season 6 episode 12 as per the NBC synopsis, “While chasing a heroin supplier, CPD crosses paths with a convicted criminal recently released on a technicality. Halstead’s history with the man threatens the team’s ability to put him back in prison.”

Chicago PD begins tonight with Jay (Jesse Lee Soffer) at a club, undercover while Sgt Voight (Jason Beghe), Kim (Marina Squerciati), Kevin (LaRoyce Hawkins), and Adam (Patrick John Flueger) watch from the outside. Frank Delgado (Bernardo Badillo) arrives on the scene to one of the underground poker games that Hailey (Tracy Spiridakos) is bartending; Matthew Garrett tries to pick her up for a party after the club. Jay recognizes the name as Antonio (Jon Seda) approaches and Jay says that he can’t be there as he has a history with the man. Garrett spots him and calls him out as CPD and Jay calls him the killer of young girls.

Back in IU, Garrett is released and given $200,000 for wrongful arrest; Voight tells them they need to back down as the city doesn’t want them chasing wrongful convictions. Jay shows them his victim and says “standing down” should not be an option; Voight agrees. Jay reveals it was narcotics who screwed up and he says he will contact them. He visits his friend, Gus who says he did come across Matthew Garrett but learns he didn’t bury him deep enough because he is out on the street and dealing high-end heroin. He says that he has a sweet tooth for his younger cousin, Tyler Reynolds, who is doing 10 years in States for his cousin.

Adam walks into a local bar pretending to be Chris Wilson, saying he was friends with Tyler in prison and wants to talk to Garrett; after a few questions, Garrett talks to him. Adam tells him that he would have no problem getting him the money by today if the story checks out.

Superintendent Kelton calls in Voight, saying he saw his 1505 forms and learns they were not targeting Matthew Garrett but if he authorizes the 50K they can have him in cuffs by tonight; Kelton denies their request, telling him to walk away. Voight does. Back at the precinct, Hailey stops Jay who is angry that Kelton said no, especially since they have Garrett right where they want. Trudy (Amy Morton) stops them and informs Jay that he has a visitor. Mrs. Saunders is in the room, furious that they released the monster who murdered her daughter and then gave him money on top of that. She wants to know why no one had the courage to look her in the eyes; eight years and still nobody. She told him that Garrett would kill her and Jay didn’t stop it, and he didn’t. No more promises!

Jay returns to the IU and brings up 50K from the counterfeit crew, in evidence. Voight reminds him they were told to stand down, and after reading the file he sees that Garrett was a victim after an officer threatened him, the officer was Jay! He says if they let this deal go away and another girl gets hurt, that is on them. Voight tells him that Jay cannot be the last one through the door, giving the money to Adam with Kim as his backup. Voight tells Antonio that he will deal with Kelton.

At the bus terminal, Jay is told to stay in the shadows with Hailey, but he refuses to talk about it as they tell Adam Garrett is on his way with two males and a female. He tells Jill to go get a receipt as he talks about all the runaways, who are looking for a fix or a new daddy. Kim walks away, saying she is going to let them talk business and goes to find Jill in the bathroom; asking her about Garrett and how well she knows him. Adam continues the deal with Garrett as Kim gives her $200 to bail on Garrett. He gets suspicious of Kim and goes to search for Jill who only tells Adam to keep his phone on.

Adam is called again, where two men arrive without Garrett. They come to take the money and then the product, but Adam says they can take Kim to the drugs, but when Kim pushes after he doesn’t claim to know anything and Garrett doesn’t answer. She calls him a chump. He gives them the address of an old warehouse and Jay rushes off in his car to the location. He finds Garrett bleeding to death and says he will only make this right if he tells him where Lauren’s body is, but all Garrett says is for Jay to “kiss his ass” and dies. Hailey arrives on the scene, demanding to know what happened.

Jay explains what happened but there is no sign of any China White, as Antonio says there is no sign of who killed him. Voight wants to run with this case as they were told to stand down on this case and there are going to be headaches regarding this one; the homicide detective agrees. Jay joins Voight in the car, who wants to know what the hell happened in the warehouse; Jay admits he was alive when he got there but someone else shot him. He knew he wasn’t going to make it but he wanted to give him a chance to tell him where Lauren was before he died. Voight advises him to simply tell anyone who asks that Garrett was dead when he got there.

The only thing they find at the scene is a casing that matches the wound on Garrett as Hailey finds it ironic they have to clear the murder for this prick. Voight doesn’t care how much they hate this guy, but they have to solve this murder and quick. Adam gets info from a CI about a locker that has China White in it and manage to nail one of Garrett’s friends picking it up; Adam takes him down when Kevin finds a kilo in the bag. He swears he heard the gunshot but didn’t see anything else. Voight feels killing him was a community service and wants this murder down to manslaughter.

Jay returns and Hailey shows him some footage from the warehouse, which proves Santana is telling the truth, but it also shows that Jay was there a full 10 minutes before IU showed up and he shut off his radio when he went inside. Jay says he must have been there longer than he thought; she says anyone who looks at these facts will assume he had an agenda. It doesn’t matter what she thinks but they will ask whether he had an agenda. He admits he didn’t know what he would do, but Garrett was bleeding out when he saw him. He reveals that he did question him and Hailey says he crossed lines and didn’t render aid, meaning he could go to prison. He gets a call that homicide wants to talk to him.

Homicide Detective (Mark Alex Hanna) interrogates Jay, asking him why he went dark, even after he has a history with Garrett. Jay tells him if he wants to write him up for being impatient, he can. When asked to confirm that Garrett was dead when he got there, Jay believes he might need his representative with him. Voight goes directly to Kelton, demanding to know why he is jamming up Halstead. Kelton says the city is no longer going to tolerate cowboy policing and the city won’t accept any more questionable police shooting and right now Jay Halstead is suspect number one.

Voight returns to the unit, telling Jay the best way for him to protect himself is for them to find the guy who killed Garrett and not to call his rep. Trudy Platt (Amy Morton) brings up the ballistics report, showing them the slug used to kill Garrett matches a slug used to rob a liquor store in 2015, and it belonged to a man named Frank Delgado. Voight tells them to hit it, but Jay needs to stay at the district. They breach the house and quickly apprehend Delgado.

Voight takes Delgado into interrogation when Hailey joins them so he can’t deny not knowing Garrett. He claims to no longer have the gun as the cops took it into evidence after they arrested him 4 years prior and suggests the cops used it and it wouldn’t be the first time CPD played dirty. Voight talks to Jay and learns his old friend, Gus was the arresting officer who never checked the gun into evidence.

Voight goes to see his retired friend, saying he almost pulled it off but he can’t figure out how Gus knew Garrett would be at the warehouse; saying they can place him at the warehouse at the time of the murder. Gus confesses when he learned the animal was released he snapped, especially after he gave his life and it was all a joke. He went back to the streets, dug into the old world and felt the world is a better place without Matthew Garrett.

He asks Voight to look the other way, but he can’t since one of his guys will get jammed for it and he is a good cop. Gus feels he is a good cop too, but this criminal gets 200K and he has to clip coupons; what is wrong with this world? Voight tells him he knows how this works. Gus asks for some time alone. Voight agrees to give him some time alone and walks outside, but the second he walks out the door Voight hears the gunshot and knows Gus killed himself.

At the bar, Jay and Hailey talk about the long week they had. Jay shakes his head, thinking about Lauren’s mom and how she will never have closure as Hailey reminds him he cannot right every wrong and he has to let it go, and can do only the best he can. Her phone goes off and she admits it is Adam, he encourages her to go, which she does; saying she will see him later.