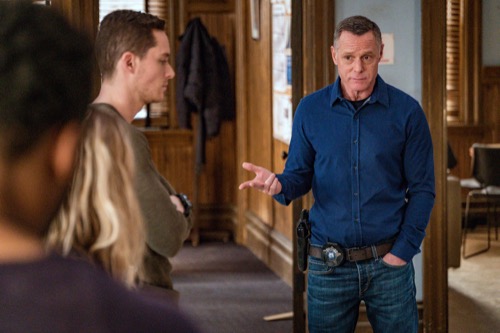 Tonight on NBC their drama Chicago PD returns with an all-new Wednesday, February 20, 2019, season 6 episode 15 called, “Good Men,” and we have your Chicago PD recap below. On tonight’s Chicago PD season 6 episode 15 as per the NBC synopsis, “Using information from Chicago Fire’s Cruz, Intelligence chases down the robbery crew that’s been using the lockbox key. Voight (Jason Beghe) is under pressure to bring the crew to justice without tarnishing the reputation of a murdered firefighter who might have been involved.”

Cruz found out which firefighter was behind the lockbox thefts. He knew that it was Calvin Suggs that stole the key to the lockboxes and that the man handed it over to someone in a black car. Technically, Cruz was just supposed to pass this information on to the police and instead he couldn’t resist confronting the thief. He wanted to know why Suggs handed over the keys. Suggs just didn’t have the answer he wanted. He kept saying that it wasn’t about the money and that could make things right. Suggs wanted to get the key back and he left before Cruz could stop him or at least find out where he was doing. Cruz waited for Suggs to come back and when he didn’t return he handed over the information to the police.

Cruz had gotten a feeling of Suggs. He believed that Suggs was a good guy that got caught up in something that he shouldn’t have and he would have gotten those keys back, but Intelligence didn’t want to hear it. They pinged Suggs’s cell phone and were tracking him that way. They were going to arrest Suggs without considering what Cruz said and so Cruz invited himself along. He wanted to be there to make sure that Suggs didn’t fight when he was arrested and unfortunately he arrived at the scene too late help a friend. Suggs was found dead in an abandoned car. The last thing he tried to do was get that key back and make things right. And so Cruz didn’t want to hear it when he believed the police were vilifying a dead man.

Cruz was there when the police went to go question the widow and he backed her up when she said she didn’t want to talk to the police. The police were trying to tell her that her husband was involved in a string of burglaries, but according to everyone who knew him, this didn’t sound like Suggs. Suggs was a great husband, father, and firefighter. He grew up in the projects and found himself in some trouble. But then he turned around when he became a firefighter. He gave back to his community and was loved by everyone to the point where the CFD didn’t even want the allegation made against him to come to light. The commissioner reached out to Voight through an intermediary and he asked the fact Suggs handed over the key to be kept a secret.

No one wanted the attention that a dirty city official would cause. The Chicago Fire Department wanted to hold Suggs up as a hero who was violently murdered and so the police had to tread carefully. They couldn’t question Suggs’s family. They were in the middle of figuring out what to do when an alarm was raised at another high-end building and so they reported to the scene, but Halstead ran into one teenager after another and one kid was trying to give CPR to an elderly man. The man owned the apartment and he had suffered a heart attack when he saw the kids breaking in. Halstead tried to get the kid to put his hands up and the teenager used that opportunity to run away as fast as he could.

Thankfully, Halstead still got a pretty good description for the two kids he saw and he had sketches made of them. He and the rest of Intelligence were questioning if they should ask Suggs’s friend if they had ever seen those kids before though they remembered the elderly man and first asked how the kid learned to give CPR. The police found out that the Fire Department runs an outreach program for at-risk kids and so they brought their sketches there. They found out the names of these boys and that the boys lived in Suggs’s old neighborhood. And when they went over there they ran into a young man by the name of Vyshonne Kamen who had been overseeing a fight between the kids.

The police had broken up the fight, but Kamen gave them a bad feeling and so they remembered the encounter even as they later found the boys from the burglary. The kids were Aiden and Chris. They were both frighten when they came in and none of them had wanted to talk until the police brought up Suggs. Suggs was dead and that was something neither of the boys knew. The one named Aiden cracked first. He tried to claim that he stole the key from Suggs and that Suggs had nothing to do with the robberies. Only Halstead knew the kid was taking the wrap to preserve Suggs’s name. He didn’t want the kid to be sent away for murder and so he and Voight arranged for the kids to talk without any cameras or the risk of being seen.

They then grilled the kids over the real story and learned that they had gotten the key to buying their freedom. Both of them were in a gang and they weren’t hardened yet. Neither of them wanted to sell drugs or use guns and so they turned to Suggs. Suggs went to Kamen who was the enforcer overseeing the keys and he tried to reason with him. When that didn’t work, he then tried to offer Kamen money. He offered to pay Kamen three dollars for the boys’ freedom and Kamen turned it down because he said he wanted a hundred grand. The boys would never be able to raise that money and so that’s when Suggs handed over the key. It was supposed to be simple and no one was supposed to get hurt.

Things changed when Aiden mouthed off and revealed to Kamen how they were paying for their freedom. That’s when Kamen took the key from them and then revealed he was never going to let them go, but Suggs tried to confront Kamen again and Kamen killed him in order to keep the key. The police told the kids that they could get off lightly if they wore a wire and so Aiden wore it because he blames himself for what happened to Suggs. Suggs was doing the wrong thing for the right reasons and so Aiden wearing that wire got justice for him. He caught Kamen admitting to murder on tape and that tape could clear the boys in the burglaries as well as the death of the elderly man who later died.

But it implicates Suggs and so Voight had to make a choice about whether or not he was willing to tarnish Suggs’s name.

He ultimately decided to do what was best for the kids and so the CFD weren’t happy when one of their own was implicated in theft and murder.