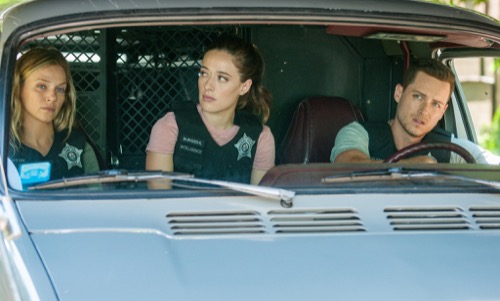 Tonight on NBC their drama Chicago PD returns with an all-new Wednesday, October 2, 2019, season 7 episode 2 called, “Assets,” and we have your Chicago PD recap below. On tonight’s Chicago PD season 7 episode 2 as per the NBC synopsis, “Atwater goes undercover in a dangerous South Side drug syndicate, and learns there may be more to its kingpin than meets the eye.

Halstead tries to join Atwater undercover, but finds himself at a disadvantage. Voight petitions the brass to show Ruzek leniency in his court case.”

Chicago PD begins with Adam Rusek (Patrick John Flueger) knocing on Sgt Hank Voight’s (Jason Beghe) door, revealing straight obstruction charges and court will probably happen sometime next year. He asks if he can be in general population because he doesn’t know how well he would do inside a cell 23 hours a day. He leaves, saying he has been trying to reach out to Kevin Atwater (LaRoyce Hawkins), but he is out on a case and can’t respond.

Jay Halstead (Jesse Lee Soffer) and Hailey Upton (Tracy Spiridakos) are in the surveillance van realizing that Andre Lambert (Wesley T. Jones) is beginning to lose his touch, especially when he lectures Kev for calling him Dre, instead of his full name. Darius “D” Walker (Michael Beach) walks in and reveals someone has been shot, killed and now his 20 grand is gone too. Andre points the finger at Kevin, causing Peanut to pull out his gun and point it right at Kevin’s face; forcing him to knock Peanut out. Peanut follows him outside and once in another alley and the shake hands, making sure that Kevin doesn’t put his name on any papers.

Back at the IU, Hailey is giving the rundown of what is happening on their case, Voight feels it is an inside job as the seller kills the man and resells the product; they see it all the time, but Kim Burgess (Mariana Squerciati) says this is the first time it has happened to Darius Walker. The good news it is opens an angle for them Latin Players; this means D will be looking for a new supplier. He tells Jay to go undercover as their new supplier. He asks Voight if they are good about last week, but Voight will only say, “we are where we are!”

Kevin, Jay sit with Andre when Darius walks in. Kevin is annoyed that Darius would own such a place, to front his money, mentioning that it is people like Darius that keep him from waking up with his brother and sister every day.

Meanwhile, back at the precinct, David Heller (Matthew Raunch) comes to see Hank; only wanting him to clarify a few statements. Hank says only with a lawyer but what he really wants is for this case to go away. He wants to know why they are wasting their time on this since Kelton is dead. He wants him to check the pulse on how they feel about doing a case against a cop over the death of a rapist drug dealing, kidnapper?

Kevin meets with Darius at his office. He questions about him and Peanut knowing each other, a real African American neighborhood, but their conversation is cut short when one of his dealers comes in and he demands to know if he is moving product near a school. Bryce quickly denies it, but Darius grabs a baseball bat and asks him again, quickly he admits he knows it is against the rules. Darius gives him a baseball bat and tells him he is now the school’s baseball coach and hes done selling dope.

Kevin is deep in thought about business when he’s walking through the bar, asking for a raincheck; excusing himself to meed Jay and Hailey. They don’t get a chance to talk as they get a call of shots fired a few blocks away. Jay and Hailey find a couple of bodies that are definitely dead when a young girl is terrified and aiming a gun at them. Jay rushes towards her and disarms her while Hailey cuffs her. She reveals the two victims are Louis Torres and Benji Rodriguez; the girl is Gloria Romero, Benji’s girlfriend and they are Latin Players, she was on a cigarette run when the shooting happened. Voight gives his team their orders.

Adam is in trouble as he punched a perp in the face, threw him to the ground and restrained him before he called patrol when he caught someone selling a product to children. Sgt Trudy Platt (Amy Morton) told him he is off the job and he cannot get involved in drug deals or anything until his stuff has been resolved. He insists he is fine and she escorts him away.

Kim tells Voight she has a witness who is willing to give an id as soon as they have the person in custody. Hailey and Jay find a blue Taurus that probably belongs to the getaway driver; so he suggests they talk to Kevin. Trudy tells Voight about the Adam situation and encouraging him to work harder on things because even though Adam is tough he won’t last a month inside.

Kevin is told the deal is dead but he spots a new kid named Gerard, claiming he may be working with someone else. Kev plays pool with Peanut, who is sick of doing the job but he is told to stick it out until the job is done. Kevin walks out when he is messed about a blue Taurus coming their way; it turns out to be the woman named Nina Rodgriguez from the bar who invited him for drinks earlier.

Kim reveals to the Team the more they dig into Nina, the less they know about her. Kevin doesn’t know anything about her either so Voight wants them to see if they can catch her dirty and try to flip her. Heller returns and is about to give Voight some news. Voight meets with Adam in the underground and informs him that Heller worked a little magic and they are willing to cut him a deal of doing 6 months, but if he goes to trial it is 3 – 5 years. His lawyer says it’s 50/50. All he knows is being a police officer and it is all he has; Voight tells him then they will fight it!

Kevin finds Nina outside the bar, talking about working together. Her cut is 5%, she promises to make some calls and she will holler at him. A little later she meets Kevin with Jay and her with one of her guys; they agree to a place and time as Voight, Kim and Hailey have them covered. They don’t want it tested as it is pure but as the deal is going down two bogies are headed their way. Voight tells Jay to stay focused. Jay says he doesn’t see any money, Nina has it but too late, the other men barge in and everyone who is a cop is revealed. Voight shouts over top of everyone ordering them all to “shut up!” The two men who came in are police officers as well, the entire sting is a bust as everyone are cops. Nina’s real name is Vanessa and they are happy to meet each other.

Back at the IU, they are told they are joining forces. Nina feels she can handle it all. She works at the bar, as soon as Darius leaves, she goes to the back room but is caught when he returns. She is able to use her cover story but he tells her to take the cognac and leave the spare key. He looks very suspicious.

The following morning, Kim is able to give the intel that they got the name of Darius’ heroin supplier Mateo Garcia (Eddie J. Fernandez) and he is insisting on meeting Darius, face to face today at 5. Voight says they will watch it and then arrest everyone in sight. They are starting to get antsy, but Voight orders them to stick it out.

Vanessa/Nina and Kevin follow a young kid who made an exchange down an alleyway but it turns out to only be a food bank delivery. He says that Darius Walker pays his tuition and books for the private school. Kevin apologizes for the misunderstanding. The deal is obviously happening at the other address. They are watching the exchange, waiting to see the money from the exchange and Kevin tells everyone they have a positive and CPD rushes out to cover the perimeter, quickly rushing to get people out of the area.

Kevin and Vanessa give chance but he manages to carjack someone, only for Vanessa to fire several shots point-blank into the vehicle.

In the interrogation room, Darius learns Kevin is the police. Kevin says they have him “dead to rights”, no matter how good his lawyers are. He insists that Kevin shouldn’t call him “Brother”. He swears he did not kill the two boys but places the blame on Garcia, saying he did it to make amends to get back into business with him. So the only thing they need to discuss is the drug case. Darius says whether he likes it or not, people are going to use, and shootings will continue but the biggest difference between him and the person who will replace him is he reinvests in his community. He claims to take from the weak to give to the strong so they can get even stronger – kind of like a Robin Hood theory. He feels some folks out there has no chance out there at all. Like it or not, this is the only way black folks are going to make it out of these streets, but it is the truth!! None of ya’ll in blue want to believe this but Darius Walker is good for Chicago!

Voight says the gun found in Garcia’s car match the bullets found in the two Latin Players. Kevin actually pleads with Voight about Darius Walker, saying as crazy as it seems, he gives a damn about the black people. Voight tends to agree that they may be better off with him on the street. Voight goes to the superintendent, feeling they need to take big swings to make things happen and promises to be Darius’ personal handler. The Super thinks about it for a moment, wanting plausible deniability for it. Voight has one condition…

Voight goes to see Adam, handing him his badge and gun. Adam doesn’t understand but Voight tells him NSA is dropping the charges for insufficient evidence and he is cleared of all charges and they are good. Adam asks Voight what he did, but he says all that matters is it is done and they hug as Adam tells Voight he owes him everything. Voight tells him he will see him in the morning.