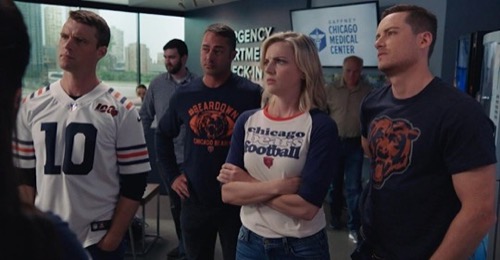 Upton is torn between helping track down the perp and providing emotional support to a scared young girl who needs her. Voight fears his team is being sent on a wild goose chase.”

Dr. Will Halstead was attacked. He walked in on Dr. David Seldon destroying their samples and the man refused to answer as to why. He was just destroying everything. Will tried to stop him and he had his head almost caved in. Luckily, Will turned out to be fine. He came too within a few moments and Seldon had gotten away by then. He disappeared into a city that was on edge. The police were looking for him and were trying to deal with a minor riot at Mama Garcia’s on top it.

People weren’t reacting well when someone on the internet told them outbreak happened at Mama Garcia’s. The woman that owns the place had found her restaurant defaced and someone threw in a firebomb as well. The Fire Department was able to deal with the fire, but that didn’t change how angry and afraid everyone was. They were reacting like that because they didn’t want to be the next to die.

The police increased their dig through Seldon’s life as a result. They thought finding him would put an end to this nightmare and so they checked where his phone was last pinged. It came up as being near his ex-wife’s place. Carrie White Seldon didn’t appear to be at home and yet that didn’t mean the same for the Seldon they were looking for. Halstead and Upton were forced to react by breaking the door down and they didn’t find anyone at home.

Only they did find signs of blood. The blood led them to a bunker in the basement and the detectives couldn’t get inside. They tried knocking, but no one answered and so they called in the Fire Department. Those guys were supposed to be trained for anything. They also were really good at their job and so they found a solution. They pried the door open using the pillars in the basement as leverage and right after they did so they were attacked by Carrie.

Carrie started shooting at everyone. She didn’t want them coming close because she said she didn’t want to be infected and so they had to convince her that they were clean. They told her they had seen the signs for themselves. They knew they weren’t infected and they weren’t going to touch her. It was after they promised not to touch her that she came out. Carrie later confessed that her ex-husband was the one that told her to lock herself up in the panic room and it did it because he said that was the only way she would survive.

Now, that panic room had everything. It was stockpiled for a good decade and so Carrie could have survived down there for years. She ended up telling the police that the bunker was her husband’s idea. He made this educated guess that they would need one because there were so many risk factors out there and he didn’t want them to be unprepared if race-ending events ever occurred. And what’s funny is that Carrie never questioned him on his paranoia.

She believed in it as well. She believed that something was bound to happen and so she was all in for being prepared just in case an “event” occurred. Meaning they didn’t get a divorce over this. They got a divorce because Seldon was slowly becoming distant with her and she didn’t want to be married to someone that continues to drift away. He was preoccupied with his work, she thought. She didn’t suspect that he could bring about the event just to prove a point.

Carrie told the police everything when she found out what her ex was doing. He came by the house because he said he wanted to help and he didn’t want to go into the bunker with her because he said he still had work to do. Carrie didn’t know what he meant by it. She just knew what he said and passed it on to the police. The police tried to follow up on it. They tracked down Seldon’s credit cards and unfortunately, he wasn’t the one using it.

Seldon handed his credit cards to several individuals in order to tie up the police. He knew what he was doing and he didn’t care that he was causing mass panic. His picture was released to the media. Everyone as being asked if he saw them and the phones were being flooded with phone calls from scared people that claimed to have seen and most of them were wrong. They just thought they saw him. The police couldn’t search through all those false leads and so they followed what they knew.

They found out that Seldon was renting a loft. They went there and found his secret lab where he was seemingly gathering information for his next attack. Seldon had planned on the setting of the bioweapon in the middle of the parade, but no one showed up to the parade. Everyone was locked up inside of their homes and were in hiding. No one was in the mindset to go to a parade where they might catch this flesh-eating disease.

Seldon’s latest plan seems to have failed. Then again this could be another diversion and so the police had to investigate that angle as well. They had to figure out why Seldon doing all of this. His divorce was a result of whatever happened to change his mind and so they looked into what happened around then. They saw that Seldon was buying things up around June. They also learned that funding for his research was drastically cut for the next year.

BRT Health stopped Seldon from continuing his research. He thought they were fault for stopping his life-saving work and so now he was punishing them. He was going after everyone that was behind the decision to cut funding. Seldon was even going to attack BRT’s offices directly to prove his point and so the police were arriving as someone was either thrown or jumped from a window. And that alone proved that Seldon was there.

This was all about revenge. Seldon wanted to kill everyone attending a board meeting and this time he didn’t use the bioweapon. He just brought along an old-fashioned gun. He was going to shoot them all when Halstead arrived. Halstead asked to enter the room. He said he would leave his gun and come in unarmed. His actions also made Seldon feel safe enough to talk to him. Seldon was practically begging for someone to talk to about what he was doing.

He was proud of his work. He said no one understood it or him and he wanted to share that work with Halstead. He demanded that Halstead cut himself. Once he did, Seldon wanted him to spread the bioweapon by spraying it and so Halstead was saved by Upton. She took a shot that distracted Seldon and that gave Voight the chance to shoot him to death. The police were able to stop Seldon but getting back to normal was difficult for both them and the city.

It took a while before people were ready to put themselves out there again. But they did it in the end and with it, life returned to Chicago.