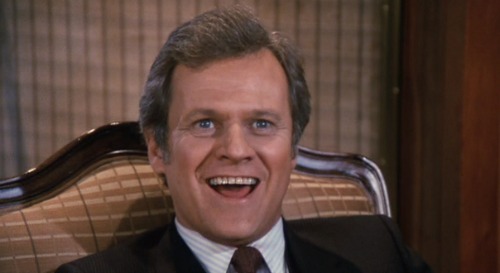 Fans of Dallas, the long-running CBS primetime soap, are mourning the death of actor Ken Kercheval, who portrayed oil tycoon Cliff Barnes on the series. Cliff was the arch nemesis of J.R. Ewing (Larry Hagman) and was a staple on the series for its entire run from 1978 to 1991.

Kercheval also revived his popular character by participating in the 1996 television movie called Dallas: J.R. Returns, and he appeared in the Dallas series revival from 2012 to 2014.

Kercheval passed away on Sunday, April 21. Details about the cause of death are unknown at this point, but it appears that he will be laid to rest in his hometown of Clinton, Indiana.

He was born in Wolcottville, Indiana, and was raised in nearby Clinton. He was a music and drama major at Indiana University, and made his Broadway debut in a play called Something About A Soldier in 1962. He appeared in numerous plays and musicals during his early years, including Cabaret, The Apple Tree, and Fiddler on the Roof.

Kercheval also appeared in several major motion pictures during the 1970s, including Network, F.I.S.T., and The Seven-Ups. But it was on television where he became a familiar face to many. In addition to playing the beloved Cliff Barnes on Dallas, Kercheval appeared in numerous other series in a guest role, including CHiPs, Kojak, The Love Boat, LA Law, Murder She Wrote, and ER.

Interestingly, Kercheval was not originally cast as Cliff Barnes on Dallas. He was first cast in the role of Ray Krebbs (Steve Kanaly), who was Jock Ewing’s (Jim Davis) illegitimate son. But he eventually won the role of Cliff Barnes, who was Pamela Ewing’s (Victoria Principal) brother on the series.

The character of Cliff Barnes was an interesting one, and it’s hard to imagine anyone other than Kercheval in the role. Cliff was constantly defeated in business by J.R., and Cliff even had an affair with J.R.’s wife Sue-Ellen Ewing (Linda Gray), only to get dumped by her when she returned to J.R.

Kercheval once spoke about playing a continually defeated character. “I thought as an actor, how am I going to have an audience believe that this guy is not some imbecile who keeps coming back only to get whipped? I thought the only way is to add some humor to it, just to say, ‘dust yourself off, get up, and start all over again.’”

Dallas fans will be forever grateful to Kercheval for his amazing portrayal of a flawed, defeated character with heart who never stopped trying. Our condolences go out to Kercheval’s family at this time. Don’t forget to check back with CDL for all the latest entertainment news and updates.