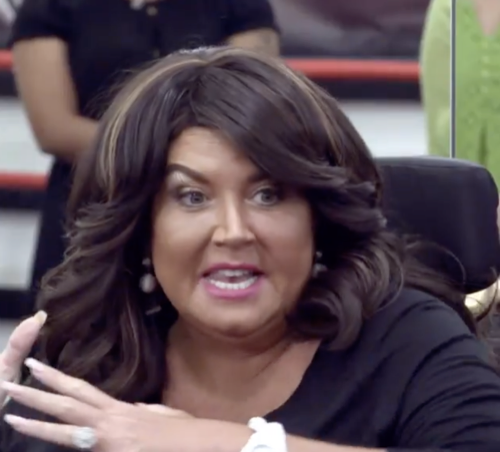 Tonight on Lifetime Dance Mom returns with an all-new Tuesday, August 27, 2019, season 8 episode 15 and we have your Dance Moms recap below. On tonight’s Dance Moms Season 8 Episode 15 “Rise From the Ashes,” as per the Lifetime synopsis, “With a week until nationals and a chance for redemption in Pittsburgh, the pressure is on for the ALDC.

Abby choreographs her most personal group dance yet, and Brady and Pressley go head-to-head for the chance of dancing solos at nationals. Tension between the moms could jeopardize everything, as one team member quits unexpectedly.”

On tonight’s season, 8 finale of dance mom’s things come to a head with the moms and Abby.. the children are having an open conversation about Abby attacking Michelle who is Sarah’s mother…Abby discusses last weeks win and the physical altercation between the moms and it ends up being a screaming match in front of the children, with one team storming off…that being Sarah and Michelle…Sarah doesn’t want to leave and still wants to dance and compete, She is heartbroken but Michele her mother has made the crucial choice for them to go and u can see Michelle is tired of being bullied by Abby and the others and they decide to leave the Abby Lee school …

Despite the mother and daughter duo abruptly leaving the rehearsals continue and Abby goes thru her list of whos at the bottom of the pyramid and works her way to who’s at the top being lilliana..there is an upcoming competition in Pittsburgh, right before nationals and the theme is “ashes” to symbolize Abby and her school rising from the ashes… to show Abbie’s critics and peers that she is still here and not defeated despite the personal issues she has faced with her health and coming back from prison…

She gives solos to Pressley and Brady during this competition…with each child still have hopes to get a solo at nationals..the children rehearse with actual ashes for this competition which doesn’t sit well with the parents as they see it as a risk..the parent see this as Abby using the children to prove a point to her critics. The children are seeing that Abby has favoritism to Presley and Brady by giving them second chances, leaving the rest disappointed and worried for Nationals…Abby gives Brady a risky theme to dance blindfolded during his solo some mother’s think it’s an advantage while his mother is naturally scared for his safety, the children do a group rehearsal and Abby isn’t really impressed with the kids.

The children and Abby head to the competition..Michele heads to try to convince Abby to allow Sarah to dance with the rest of the group, she’s not greeted by the other moms too well as one strongly feels she is trying to stir the pot, Abby has to make a decision on whether Michelle and Sarah come back to the dance school. Presley and Bradly head off to compete for the last solo spot in nationals with each of their dance performance in Pittsburgh. Bradley delivers his all eyes on me performance blindfolded elegantly…Pressley’s theme is centered around women’s rights dressed as a hippy flower child, she dances vibrantly across the stage full of energy and Abby seems impressed.

The mother’s get into it backstage over Bradley blindfold routine seeing it as Abby giving him an advantage doing such a difficult risky routine. They move on to the group routine “ashes” which is personal and important to Abby that the children do well and not let her down,the pressure placed heavily on the kids to not disappoint Abby or her critics..in addition to that they each are trying to get that last final solo spot at nationals so much is riding on this performance for them.

The children did well together in this dramatic piece and diverted each step precisely and on point. Pressley impressed the judges with her solo performance and wins first place. The children have also redeemed Abby and her school by winning first place for their group performance. Abby decided to give Brady, Pressley and Lilliana solo performances at nationals and it doesn’t sit well with the parent as they feel she is once again giving Brady favoritism by giving him another chance.