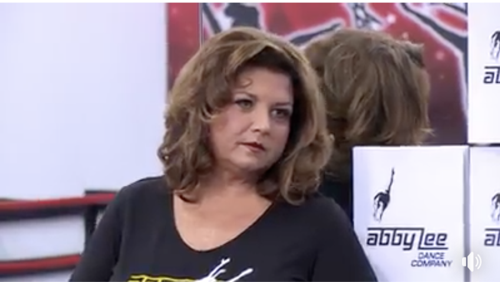 Tonight on Lifetime Dance Mom returns with an all-new Tuesday, July 16, 2019, season 8 episode 8 and we have your Dance Moms recap below. On tonight’s Dance Moms Season 8 Episode 8 “A Team on Trial,” as per the Lifetime synopsis, “With a losing streak weighing heavily upon the team’s shoulders, fighting between the girls puts the group dance in jeopardy.

Abby gives a mini her big shot at joining the team; a duet with GiaNina and Elliana leads to all-out war between two moms.”

They’re called themselves a team, but they didn’t act like a team and the last two weeks proved it. The ALDC hasn’t a win in a while. The team was still having these basic timing issues and they wouldn’t have happened if they just talked to each other. Gia for one had asked for help. She went to her teammates for help before the competition and none of them took her seriously. They all talked over her if not outright ignored her. Gia never forgot that and so she brought it up to Abby. She wasn’t trying to shy away from her own mistakes. She said she knew she messed up and maybe if her teammates weren’t trying to potentially sabotage her then they would have helped. Gia made her case when they were in front of the mothers and that sent a few of them off.

The other mothers all got upset with Gia for only telling the truth as she saw it. Gia said she went to her supposed friends for help and that no one stepped up to the plate. She also talked to her teammates backstage when it was just them. She asked them (without an audience) why didn’t they help her and all they could bring up was how she’s changed. Some of the others thought Gia used to be their friend and that she changed when Elliana came. Elliana was new and Gia had wanted to put her at ease. In doing so, they became friends. Gia even told her teammates that being friends with Elliana didn’t excuse what they did and no one had anything to say to combat. They instead mentioned in their confessionals that things have been different since Elliana came.

Elliana was being blamed for everything and so it could be a good thing she didn’t show up. Most of the dancers were homeschooled, but they needed to complete enough school hours per day and Elliana was behind. She had to stay home for the day in order to do her schoolwork. Her mom tried to explain it and she wasn’t fooling anyone. Abby knew that it was a bogus excuse. If Elliana had wanted to participate then she should have done her schoolwork in a timely fashion. Abby knew this and so did the other mothers. Its why they didn’t think it was fair when Abby announced Gia would be having a duet with Elliana. Elliana wasn’t there and she was still receiving preferential treatment.

Elliana would have gotten cut from the duet if she had been anybody else. Everyone knew this and so this simply stirred everyone up. They were angry. They were frustrated that the solo, as well as the character of the strangler, was going to Elliana and it didn’t help that there was a new face at the studio. The team was joined by Kamryn and her mother Adriana. Again there was frustration because some of the moms didn’t think the team could come together with someone new being added and it didn’t help that Adriana was a fighter. She wasn’t going to be quiet as the others talk about her daughter. She spoke up for her kid and she asked about the role of the strangler because she was new.

The role of the strangler was actually pretty controversial. It came about because Elliana’s mother Yolanda was once accused of strangling Lilliana’s mother Stacey. There was footage of it and sure looked like Yolanda was strangling Stacey, only Yolanda likes to claim she was pushing out her hands and that just connected with Stacey’s neck. Everyone tends to believe Stacey because they’ve seen the video and no one believes Yolanda. Yolanda said what happened before the fight was what mattered. She said that she calmly accused Lilliana of bullying her daughter and that the little girl when she went to her mother saying Yolanda was yelling in her face. The truth, which was another thing that was recorded, showed Yolanda’s calm wasn’t quite that calm.

It was a bit like a manic source of calm and so it’s understandable why Lilliana would go running to her mother. Stacey tried speaking for her child, but when she tried to, she was choked by Yolanda and surprisingly its Yolanda that’s never let it go. Yolanda was arguing about it as Gia and Sarah was practicing the duet (with Sarah as the stand-in of course). She and Stacey began raising their voices and so Abby called a halt to the practice session. She wasn’t going to waste the dancers’ time. Not when their own mothers were being so messy and so that’s what the girls repeated when they joined their moms. They said that Abby didn’t want to continue with the mothers acting so crazy. Yolanda took exception to that as well. She went down to the studio and tried to tell Abby she wasn’t crazy. And that just made her look crazier.

Yolanda’s daughter Elliana soon rejoined the others, though. She still had her duet with Gia and Sarah didn’t think that was fair because she’s been the one practicing it for a whole week. So Sarah went to Abby. She felt like she earnt that duet and she agreed to do a dance-off to prove it. Sarah knew all the steps. She knew better than Elliana and that hadn’t changed Abby’s mind because she said the duet had been created with Elliana. Elliana got to keep her duet. It didn’t stop the other mothers from saying she missed too much practice to fit in and it didn’t stop Sarah from practicing. Sarah truly did want that duet. She almost had too when competition day dawned and Elliana’s mother got into another fight.

Abby had wanted to bury the hatchet in a fun way. She called down Stacey and Yolanda in a faux court to get to the bottom of what happened and they both stuck to their stories, but Lilliana did say that maybe Yolanda wasn’t yelling in her face and Yolanda pounced on that information to being shouting that Lilliana lied. The little girl was still a little girl. She maybe has exaggerated what happened because her feelings were hurt and so Yolanda should have recognized that. No adult woman needed to get that giddy about calling a child a liar. Yolanda and Stacey got into another fight about it and Abby was forced to give up on the mock trial. She thought she was settling in and it just made things worse.

Elliana had wanted to go home afterward because she felt like no one wanted her there. She was crying to her mother and Gia was doing her best to cheer her up, but Sarah was working on her makeup and she started practicing the duet again because she thought she was going to go out there. Only Elliana pulled it together. She calmed down and then killed it with her duet with Gia. She was also great in the group number and so the group as a whole got it together to work as a team. They also won their group number and their solo with Kamryn. But Kamryn showed she wasn’t ready to join the group and so Abby was cutting her after today. Abby made the decision as she watched Kamryn win.

Oddly enough, Abby hadn’t said the same when Gia and Elliana failed to come in first and so you best believe the other mothers will bring it up when they hear what happened to Kamryn.