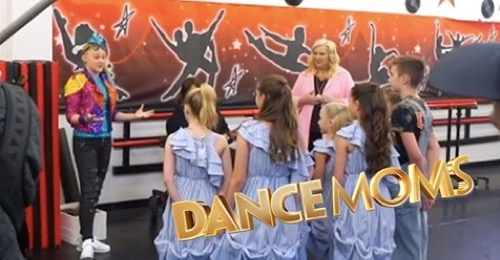 Tonight on Lifetime Dance Mom returns with an all-new Tuesday, July 23, 2019, season 8 episode 9 and we have your Dance Moms recap below. On tonight’s Dance Moms Season 8 Episode 9 “Making a Splash in Pittsburgh,” as per the Lifetime synopsis, “Heading to her first competition in Pittsburgh since her return, Abby challenges the ALDC team with their most daring routine yet.

Congratulations to the ALDC! They were coming off a huge win and everyone was happy about it because it showed that they didn’t need Brady. The girls proved once and for all that they can do it all on their own. They had been great onstage and no one should have taken away their moment, but Yolanda couldn’t help herself. She just had to say something to ruin it. This time she claimed that her daughter Elliana was responsible for the team win and naturally she wanted her daughter on top of the pyramid. Yolanda could only see what her daughter brought to the team and so she forgot about the rest. Elliana hadn’t won her duet. The duet was created with her in mind and she couldn’t pull off the dance because she didn’t have enough time to practice.

For someone that claims her daughter is the best, Yolanda failed on staying on top with Elliana’s schoolwork and she had to miss most of the practice just to catch up. Elliana then came back to the studio to a duet she wasn’t prepared for. She had needed the extra time and she showed that she couldn’t pick up the choreography as much as Yolanda likes to claim. Yet, that’s her mother. Yolanda does speak up for Elliana and she gets into fights when the other mothers tried to the same. Stacey and Yolanda have been butting heads for years now and most of the other moms have sided with Stacey. The only one that doesn’t seem to support her is Brady’s mother Tricia. Tricia and Brady were invited back to the studio because Abby really wanted the boy to join the team.

Abby had only given him a break. She wanted the girls to grow as a team and she felt like it wasn’t possible with Brady around because she saw some of the girls fall back on his skillset, so Brady was asked to join the team as an equal this time. Brady was so happy to be back to back that he didn’t even mind his “break”. His mother, though, felt differently. She blamed Stacey was running them out of the dance studio and she made a big show about she was willing to put it behind her. Tricia, of course, meant none it. She wouldn’t have stirred up drama if she was going to be nice and so she rattled Stacey until Stacey snapped. Stacey yelled at Abby that she couldn’t take much more of this. Stacey was being attacked by Yolanda and Tricia now.

She was sick of it. All she wanted was for her daughter Lilliana to have a fair chance and it turns out this was the perfect week for her child. Lilli had been given a solo. She was going up against Elliana in the solos at their next competition and they were both doing solos that were once performed by JoJo. Jojo was one of Abby’s success stories and she was a big deal with the kids. They all looked up to her. Therefore, they were really happy when they found out that JoJo was coming to the studio. She was going to watch their dances and critique them. She was also nicer about it than Abby. Jojo came to the studio and she actually helped the girls. She told them when they needed to step up and she helped coach Elliana out of her nerves.

Elliana had been having doubts about her solo. She didn’t feel like she was getting the support she needed from Abby and that was causing a lot of self-doubts. Jojo saw this and she was a great help. She talked Elliana into using that frustration to drive the dance. Elliana would be fine if just stored up some of that anger and put it all into the dance. She also didn’t have any reason to doubt herself. Elliana was going to be using all of her limbs for her solo and Lilliana couldn’t say the same. Lilliana had to wear a straight-jacket for her dance. She could only use her legs and she couldn’t risk falling because there was little chance she would ever get back up again.

So Stacey had been worried. She got a little antsy up in the mom booth and this time JoJo’s mom called her out on the rude behavior. She accused Stacey of trying to run roughshod over everyone and it surprised the fellow dance mom that no one was speaking up against it. Yolanda had something to say, but no one took her seriously because she keeps running into the bathroom to cry and she says she does it because of the unfair treatment that her daughter has been getting. Which again didn’t make sense. Elliana has been getting solo after solo since she came and so what does it matter if Abby doesn’t like her as much as before. Abby’s who schtick is being mean. She wasn’t going to change for that anyone and so Yolanda had to toughen up.

It wasn’t long before the competition day finally came. The dancers were going to be dancing in Pittsburgh and Abby wanted everything to be special on their home turf. Abby even created a water dance for the group routine. It was going to be dangerous because anyone could slip in the water and there couldn’t be any delays in their movements. The group had to dance as one and so Abby was focusing more on that than she was about Elliana going up against Lilliana. Both girls were accomplished dancers and ff they each walked away with a trophy, then Abby’s job as their coach was done! Abby was constantly thinking about the bigger picture. She didn’t care for the little details or the grudges that the mothers had.

Both girls competed and Elliana wasn’t as great as she could have been. Abby had mentioned this to Elliana and both mother and daughter had a good cry about it. They made sure to dry those tears by the time they saw Abby again so she had no idea how much she devastated them. But Abby hadn’t said anything that the judges weren’t thinking. Elliana was later rewarded third place and Lilliana was given a perfect score as well as first place for her routine.

The group routine had also been great, but it wasn’t enough for the judges and they were rewarded fourth place for a water routine. There weren’t any other dance groups that were doing it and so why weren’t they given a bigger score?

And so Abby eviscerated all of them for their failure because they weren’t living up to her legacy!