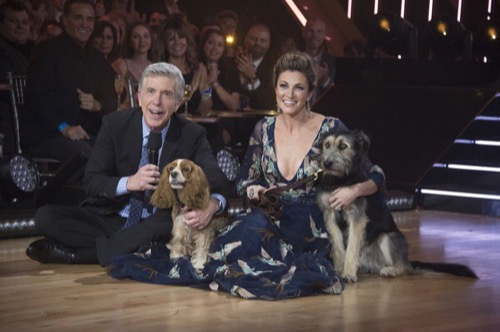 Tonight on ABC the glitz and the glimmer returns to the ballroom as Dancing With The Stars when season 28 episode 7 of DWTS airs! We have your all-new Monday, October 28, 2019, season 28 Episode 7 Dancing With The Stars recap below! On tonight’s DWTS Season 28 episode 7 “Halloween,” as per the ABC synopsis, “All treats and no tricks as eight celebrity and pro-dancer couples return to the ballroom to celebrate Halloween and compete on the seventh week.”

Judges Comments: Len: “You were rocking Kel and I was reeling. It was fast, fun; I was a little concerned about your feet, but they were sharp and clear.” Bruno: “I love a cult classic. You took it and reimagined it, it was original and a surprising Halloween treat.” Carrie Ann: “That was incredible. I was a little concerned in the beginning, but then it all came together – it was so tight and so clean.”

James Van Der Beek and his partner Emma Slater dancing the Viennese Waltz to “I Put A Spell On You,” from Annie Lennox.

Judges Comments: Bruno: “You were like the prince of darkness. It was such a powerful performance. It was perfect until you slipped. Apart from that, it was incredible.” Carrie Ann: “I’m crying for you. It was perfection. I was in the dance, dancing with you. Unfortunately, there was that one part.” Len: “You put a spell on me, I thought the dance was terrific. I was watching you and I thought it was going to be a ten, and then there were two incidents. It was still a lovely mix of tricks and treats.”

Ally Brooke and partner Sasha Farber dancing the Tango to “Sweet But Psycho,” by Ava Max.

Judges Comments: Carrie Ann: “That was ridiculously good. What I loved most about that, is that when you dance, you don’t even know you are going to get it right because you push yourself so far. I love that about you. There was one tiny thing when you lost your focus.” Len: “Last week you were early dead and buried, and I am so glad that you have come back, and come back to life with a terrific Tango.” Bruno: “That really was a premier league Tango with an attitude. It was full of content, done correctly, you slightly lost balance for a second, but well done.”

Judges Comments: Len: “I think that the bad girl was a terrific dancer. You come out and you performed, full-on, I think you did a terrific job, well done.” Bruno: “Nothing scary about that my love. You are the most beautiful and friendly zombie ever. It was lively, it was theatrical, great performance. You have to be sharper and more grounded though.” Carrie Ann: “I agree with Bruno, there is something lacking in your performance. You are disconnected from the movements, it is almost like you are shy. I want to see layers of you that we have never seen.”

Judges Comments: Bruno: “There was a lot of power and purpose with that one. You went on the wrong foot once, but well done.” Carrie Ann: “You were like a sonic boom. There is something about you when you release emotion in the dance, you opened up and you let it rip.” Len: “Plenty of attacks, plenty of intensity. It’s the shaping that had to be a little more exaggerated, but you attacked the dance.”

Judges Comments: Carrie Ann: “You slipped, but what you did with that slip blew me away, you were so in character, you made it a moment. Your core is getting so strong.” Len: “I’m not sure what Lola wants but I saw plenty of what Lenny wants. You were so full of Argentine characterization, I thought the two of you sparked off of each other, well done.” Bruno: “It was exquisite, it was like watching Marilyn Monroe was a vampire.”

Sean Spicer and partner Lindsay Arnold dancing the Jive to “Monster Mash,” by Bobby “Boris” Pickett and the Crypt-Kickers.

Judges Comments: Len: “This wasn’t super and it wasn’t natural. It lacked Jive content, but what I like is that you try your hardest and give it your all.” Bruno: “The monster part was perfection, the jive was six feet behind. There was only one step on time. Your timing is not your strong suit.” Carrie Ann: “That was a dance only your mummies could love. You were backsliding this week, but I do love your spirit, you never give up.”

Judges Comments: Bruno: “That was a beautiful and haunting Rumba. I loved the way you were able to tell a story, you dragged us with you. Sometimes you lost a little fluidity.” Carrie Ann: “There was a tiny mishap. I love seeing a woman so confident doing the Rumba, you were oozing with confidence, what you did was beautiful.” Len: “Pasha, week after week you give routines and I am just blown away with your choreography. Kate, you came out with less confidence, you could have stretched your legs out a little more, but a knockout performance by the two of you.”

Judges Comments: Len: “I enjoyed it so much, congratulations. My admiration for you celebrities is incredible, to learn two dances like that, well done.” Bruno: “I liked it as well because it was dramatic but elegant at the same time. You brought out your personalities, well-done everybody.” Carrie Ann: “I loved it, it was really powerful. Hannah, you did really well.”

Judges Comments: Bruno: “That was nightmarishly entertaining, what a concept. Not everyone was always on time, but I appreciate the effort.” Carrie Ann: “I loved the concept but I am going to give most valuable player to Kate.” Len: “I like the fun of it, I could tell you enjoyed it, wonderful entertainment, congratulations.”

Time for some results; the two couples that are in jeopardy are Karamo & Jenna, Kate & Pasha.

Len makes the final decision, he chooses to save Kate & Pasha.