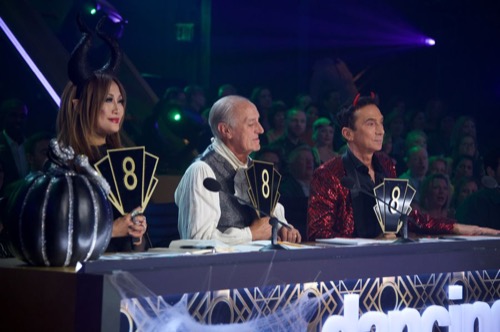 Tonight on ABC the glitz and the glimmer returns to the ballroom as Dancing With The Stars when season 28 episode 8 of DWTS airs! We have your all-new Monday, November 4, 2019, season 28 Episode 8 Dancing With The Stars recap below! On tonight’s DWTS Season 28 episode 8 “Dance-Off Week,” as per the ABC synopsis, “Seven celebrity and pro-dancer couples return to the ballroom to compete on the eighth week of the 2019 season.

After a first-round dance to a style they have not performed before, the second round is the Dance-Off challenge.”

Sean Spicer and his partner Jenna Johnson, filling in for Lindsay Arnold and dancing Jazz to “Come Sail Away,” by Styx.

Judges Comments: Len: “We keep throwing you out of the boat and the viewers keep throwing you a life preserver. We all like an underdog, there wasn’t a lot of glaring mistakes, but it is your feet. I respect your effort, well done.” Bruno: “You don’t have many jazz bones in your body. You look like you were going to get lost in the Bermuda triangle. I praise your resilience when it comes to a fish out of the water, nobody does it better.” Carrie Ann: “Sometimes it looks like you are doing the same dance over and over again, it is difficult to dance with somebody else gave us another shade of you, and I feel like it did you well.”

Judges Comments: Bruno: “The King himself would have loved that performance. It had the authentic fifties feel, bright, optimistic. You made three mistakes, but it doesn’t take away from the quality of your dancing.” Carrie Ann: “You started that routine amazing, you did forget something, but you found your place again. I love what you are doing.” Len: “The competition is getting is so intense, there were a few mistakes and I hope tonight isn’t heartbreak hotel for you because you deserve to be in this competition.”

Kel Mitchell and his partner Witney Carson dancing Salsa to “This Is How We Do It,” by Montell Jordan.

Judges Comments: Carrie Ann: “You took me way back. The way you moved Witney, you were leading, it was powerful.” Len: “You are on a roll, full of rhythm and junk in the trunk, those hips were going. You were large and in charge.” Bruno: “You are the main attraction. You were leading the whole dance from the beginning to the end, the main attraction.”

Judges Comments: Len: “It was a mix of good technique and eye performance. Well done.” Bruno: “It was the most amazing dance, it was like she was conducting the orchestra, you had it all.” Carrie Ann: “You are freakin’ superstar, something has changed in you.”

Hannah Brown and her partner Alan Bersten dancing the Quickstep to “American Girle,” by Elle King.

Judges Comments: Bruno: “The shock is getting better by the minute, that was a game-changer. You rocked it, you used the floor to give yourself a lift. Your foot action was beautiful, you were in orbit.” Carrie Ann: (standing ovation and hug) “That is what we were talking about, that was the comeback of the season.” Len: “You have a really nice frame, I watched your feet a lot and they were right on point. What a fabulous dance, well done.”

Kate Flannery and her partner Pasha Pashkov dancing the Jive to “Heat Wave,” by Linda Ronstadt.

Judges Comments: Carrie Ann: “I felt the celebration for your sister in that dance. The jive had a lot of energy, there was sometimes out of the hold, but you both match so well.” Len: “You two are an absolute joy for me to watch. It wasn’t your best, but it wasn’t your worst.” Bruno: “It took a while for my eyes to adjust. Very clever, and tailor-made for your ability. As always charming, good job.”

Judges Comments: Len: “I thought this was like a good book, something for everyone, held our interest from start to finish.” Bruno: “It was totally compelling, there was a section of lifts that were absolutely exquisite, it had the fluidity of water.” Carrie Ann: “We have never seen a lift with such beauty and finesse. I was impressed with a moment when you both did your arms together and it was pure artistry in motion.”

Kel Mitchell and Witney Carson vs. Ally Brooke and Sasha Farber dancing the Jive to “Don’t Stop Me Now,” By Queen.

Judges Comments: Len: “I think that was fantastic. This is a jive to survive, fast and full-on.” Bruno: “It is almost impossible to call.” Carrie Ann: “I don’t want to make this decision, you were both on fire and don’t make our jobs easy.”

Judges Comments: Bruno: “I saw someone that really improved and someone grabbed my attention, both of you gave me a great time.” Carrie Ann: One couple two people were doing the Cha Cha, the other couple one person was doing the Cha-Cha. I love you all so much.” Len: “I thought you both came out and danced really well. There were lots going on, it was really fun and I congratulate you.”

Hannah Brown and Alan Bersten vs. Lauren Alaina and Gleb Savchenko dancing the Salsa to “Rhythm is Going to Get You,” by Gloria Estefan & Miami Sound Machine.

Judges Comments: Carrie Ann: “It is like the battle of the titans, and they unleashed the Kraken. The girls are in it to win it.” Len: “Gleb put your shirt on it. It was such a fantastic dance.” Bruno: “These southern belles have steam coming out of ears, you are both so sexy.

James & Emma are on the top of the leader board with Sean & Jenna on the bottom.

After tallying all the results and America’s vote – Kate & Pasha, Ally & Sasha are in the bottom two.

All three judges choose to save Ally & Sasha.

Kate & Pasha are eliminated from the competition.