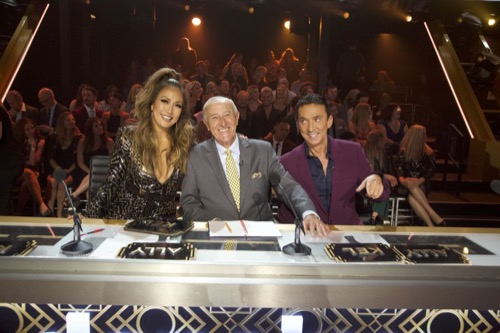 Tonight on ABC the glitz and the glimmer returns to the ballroom as Dancing With The Stars when season 28 episode 10 of DWTS airs! We have your all-new Monday, November 18, 2019, season 28 Episode 10 Dancing With The Stars recap below! On tonight’s DWTS Season 28 episode 10 Semi-finals, “Five celebrity and pro-dancer couples return to the ballroom to compete on the 10th week of the 2019 season.”

Tonight we start with the Redemption Dances.

Lauren Alaina and her partner, Gleb Savchenko get help from Len and are dancing the Paso Doble to “Stronger,” by Kelly Clarkson.

Judges Comments: “It had a lovely mix of aggression and expression. I loved to see that. I asked you to give me more shaping, I saw that throughout the dance. It was a terrific routine, well done.” Bruno: “You handled it beautifully, the only one hand was out once, but great routine.” Carrie Ann: “You have come so far, you are a woman that commands the dance floor. You knock your knees sometimes, be careful.”

Kel Mitchell and his partner, Witney Carson get help from Bruno and are dancing the Tango to “Get Ready,” by The Temptations.

Judges Comments: Bruno: “I am so proud of you, you delivered on everything I asked. You even did a heel lead. A pure real proper tango. There was assurance, confidence and there was just one mistake when you went on the wrong foot.” Carrie Ann: “You have become too refined, you have come the furthest. I thought it was fantastic.” Len: “I thought it had an intensity about it which I liked, there was some stuff missing, but you came out here with enthusiasm and you attacked the dance. Well done.”

Ally Brooke and her partner, Sasha Farber get help from Len and are dancing Viennese Waltz to “Perfect,” by Ed Sheeran.

Judges Comments: Len: “I thought it was a lovely dance and it had a gentleness about it. Much more rotation than we saw the first time around. There were a couple of places where it just lost a little bit of fluidity. You went from a caterpillar to a butterfly.” Bruno: “You were twirling, you were swirling with wonderful flow and emotion. It was so well pitched and pretty – a joy to watch.” Carrie Ann: “Your framing in this dance was beyond in this performance. It is such a gift what you give, it was so beautiful, thank you for pouring it out every single time.”
Judges Scores: Carrie Ann: 10, Len: 9, Bruno: 10 = 29/30

Hannah Brown and her partner, Alan Bersten get help from Carrie Ann and are dancing the Rumba to “Dancing With A Stranger,” by Sam Smith & Normani.’

Judges Comments: Carrie Ann: “I noticed you improved a heck of a lot, you were more opened and not closed off, well done.” Len: “In the Rumba the hips are rhythm, the arms are the melody and you married those two beautifully.” Bruno: “You definitely had those hips and body working to your advantage, it worked. It was really good the way you learned how to place your foot.”

James Van Der Beek and his partner, Emma Slater get help from Len and dancing the Cha Cha to “Canned Heat, by Jamiroquai.

Judges Comments: Len: “I realize because it is disco music you want to get a slight disco vibe, but I would have liked to see more cha cha cha. There was too much messing about going on throughout the dance.” Bruno: “It was a disco cha cha extravaganza. You are a great showman and you can sell it, your timing was off tonight though and it was quite surprising.” Carrie Ann: “It was really entertaining, you brought this whole ballroom to life, everyone was on your feet. Your posture is really broken, you need to lift your carriage.”

We continue with the unlearned dances.

Lauren Alaina and her partner, Gleb Savchenko dancing the Vienesse waltz to “Humble and Kind,” by Time McGraw.

Judges Comments: Len: “It was elegant, graceful. I like those elements of the slow waltz as well as the Vienesse waltz. You look terrific, lovely dance.” Bruno: “So sophisticated, so classic, but what I like is the chemistry, it was sizzling, a dream couple.” Carrie Ann: “You both did dance as one, but not one dimension, so many dimensions into one.”
Judges Scores: Carrie Ann: 9, Len: 9, Bruno: 9 =27/30 – total for the night 54/60

Kel Mitchell and his partner, Witney Carson dancing Contemporary to “I Will Always Love You,” by Whitney Houston.

Judges Comments: Bruno: “What an achievement, the sculptural beauty of the setup and then those lifts, the way you took them with your sincerity and honesty. You are an inspiration and a winner in my eyes.” Carrie Ann: “The dance that means the most to me is a dance like that, where you tell a story and you express your feelings and show your truth. It was riveting and pure, thank you for that.” Len gets up and gives them a standing ovation, Carrie Ann and Bruno join him.
Judges Scores: Carrie Ann: 10, Len: 10, Bruno: 10 = 30/30 – total for the night 57/60

Judges Comments: Carrie Ann: “If your goal was to prove that were supposed to be in the finals consider it done, done, done. What a showstopper, so in synch and so much fun.” Len: “It was fast, fun and fabulous. What I liked is that there were a lot of Charleston references. It was full of fun and joy.” Bruno: “Sparkling, exuberant fun, it was like a tonic for the spirit. You threw everything at it and it had the look of a real Hollywood musical number.”
Judges Scores: Carrie Ann: 10, Len: 10, Bruno: 10 = 30/30 – total for the night 59/60

James Van Der Beek shares that he and his wife lost their baby and he really didn’t think he would be dancing. It is his wife, Kimberly who encouraged him to be there.

James and his her partner, Emma Slater dancing the Fox Trot to “Take Me To Church,” by Hozier.
Judges Comments: Len: “When tragedy strikes it puts everything into perspective and this is just a dance show – for you to come out here and dance with so much feeling and emotion, I admire you so much.” Bruno: “You put so much heart into that dance, it was almost impossible to watch because we were with you. You gave some special flow, wonderful turns, and great lines.” Carrie Ann: “I don’t know how you got through that. I feel silly talking about your posture, you pulled up and did it great. There were ease and poetry in motion, thank you for bringing your emotions to the dance floor.”

Hannah Brown and her partner, Alan Bersten dancing Contemporary to “Lose You To Love Me,” by Selena Gomez.”

Judges Scores: Bruno: “The first time doing a Contemporary dance you did pretty well. What I really liked you got a wonderful dynamic in the lifts and drops. Well done.” Carrie Ann: “You move beautiful, but was the best, is the trust on those two lifts, it paid off.” Len: “Normally I am not a big fan of Contemporary, but I must say I thought the emotion came out and it was a true couple dance.”
Judges Scores: Carrie Ann: 9, Len: 9, Bruno: 9 = 27/30 – total for the night 54/60

Time for some results.

The first couple going to the finale is Kel Mitchell and Witney Carson. The next couple dancing for the mirror ball is Hannah Brown and Alan Bersten. The last couple competing in the finale is Lauren Alaina and Gleb Savchenko.