BY hellodrdavis on March 25, 2019 | Comments: one comment
Related : Days of Our Lives, Soap Opera, Spoiler, Television 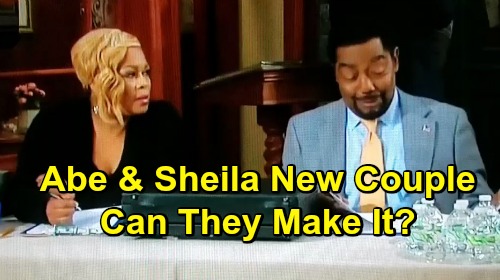 Days of Our Lives (DOOL) spoilers tease that Abe Carver (James Reynolds) and Sheila Watkins (Tionne “T-Boz” Watkins) will be getting closer in the coming weeks. These two sure got off to a rocky start when Sheila first appeared on the DOOL scene, with Sheila stealing Abe’s dedicated parking spot and nearly swiping his credit card at The Brady Pub. Abe wasn’t impressed and pretty much wrote Sheila off as a common thief.

But then something happened. Sheila needed a job, and there happened to be one available at the mayor’s office. Sheila got the gig, and she and Abe were thrown together for 8+ hours per day, 5 days a week. The two had some rocky moments here and there, but they ended up getting along ok.

One of their biggest rocky moments came when Xander Cook (Paul Telfer) duped Sheila into forking over the security tape of Xander shooting Marlena Evans (Deidre Hall). Abe was furious with Sheila over the whole thing, but he stopped short of firing her because she felt such great remorse over her actions.

And even when Melinda Trask (Laura Kai Chen) used Sheila’s actions against Abe in the mayoral election, Abe stood by Sheila and refused to fire her or accept her resignation. That’s when many viewers started to wonder whether something deeper was developing between Abe and Sheila.

But soon, there would be little room for doubt about where TPTB were going with Abe and Sheila. At a recent event in Salem Square, Sheila and Abe were together when they both reached for a pile a fliers, and their hands touched, which flustered them both. Of course, this is a typical device used on soaps to signal that two characters are attracted to each other.

Since it seems that we’re looking at an Abe-Sheila pairing, we must ask: Will they work as a couple? They couldn’t be more different. Abe is a law-and-order guy and is a former Salem police commissioner, while Sheila has spent time in prison for her hustling ways. Plus, Abe is very straight-laced, while Sheila likes to kick back and enjoy life.

And, there’s the issue of Abe’s relationship status. He’s currently in a failing long-distance relationship with Valerie Grant (Vanessa Williams), who has taken a Chief of Staff position in Washington, D.C. It seems that all of Abe and Valerie’s efforts to see each other have been riddled with problems of some sort. It has left Abe frustrated, and since Vanessa Williams has no plans to return to DOOL, it looks like their relationship will soon be kaput.

And that would certainly pave the way for Abe and Sheila to get together. But if they do get together, we can anticipate some issues going forward. First off, Lani Price (Sal Stowers) probably won’t be too thrilled with Abe seeing Sheila, given her past and possibly given the age difference between the two. Family issues will need to be addressed and worked through if Abe and Sheila are to thrive as a couple.

Also, if Abe and Sheila get together before the mayoral campaign is up, then Sheila’s past could become an issue for Abe. We could see Jack Deveraux (Matthew Ashford) and Eve Donovan (Kassie DePaiva) making Sheila’s criminal past an issue in the campaign. For example, they could argue that Abe doesn’t have very good judgment, given his choice of romantic companions.

Despite all of these potential problems and the differences between Abe and Sheila, we should note that some of the biggest DOOL couples started out as oddball pairings. Way back when, Bo Brady (Peter Reckell) was considered a wild bad boy, while Hope Williams (Kristian Alfonso) was a rich debutante type. And at one point, Steve Johnson (Stephen Nichols) was a criminal henchman for Victor Kiriakis (John Aniston) while Kayla Brady (Mary Beth Evans) was a sweet, law-abiding nurse.

So, you never know, Abe and Sheila could definitely work out in the long run. Do you think Abe and Sheila will work as a DOOL couple? Stay tuned to DOOL and don’t forget to check CDL often for the latest Days of Our Lives spoilers, updates, and news.