Days of Our Lives Spoilers: Ben Falsely Accused of Killing Jordan – Winds Up In Prison During The Time Jump?

BY hellodrdavis on October 26, 2019 | Comments: one comment
Related : Days of Our Lives, Soap Opera, Spoiler, Television 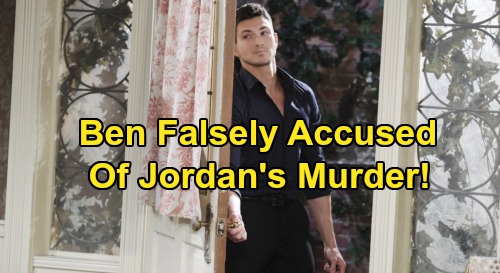 Days of Our Lives (DOOL) spoilers tease that Ben Weston (Robert Scott Wilson) will be at his wit’s end. As DOOL viewers know, he recently enjoyed a nice birthday celebration for his nephew David Ridgeway (Jaxton and Dexter Ellis), which was a big deal since his sister Jordan Ridgeway (Chrishell Hartley) made an effort to finally accept him and allow him to be a part of David’s life. Ben couldn’t have been happier about the situation, and everything at the party seemed to go great.

But DOOL viewers know that Jordan was just pretending to reconcile with Ben, and that she’s just as determined as ever to get rid of Ciara Brady (Victoria Konefal). Jordan’s got this idea that the only way to “save” Ciara from Ben is to get rid of her…permanently. So, Jordan poisoned Ciara’s cupcake, which Ciara promptly gobbled right down at the birthday party.

But as it turns out, there was a switcheroo with the cupcakes, and Rafe Hernandez (Galen Gering) ended up eating the poisoned delicacy. Rafe later collapsed, and now Jordan is going to be in real panic mode. According to Days of Our Lives spoilers, Rafe will soon suspect that Jordan was behind his poisoning, and Ben will do some sleuthing of his own after Ciara finds a vial of poison in Ben’s coat pockets that was planted there by Jordan.

All of this will lead up to some dramatic scenes after Rafe shares his suspicions about how he wound up being poisoned with JJ Deveraux (Casey Moss). As DOOL viewers will remember, JJ used to be a cop, so once he gets the scoop from Rafe, it looks like he’ll try to track down Jordan. At any rate, he’ll have a terrible encounter with Jordan during which Jordan attacks and injures JJ. She’ll really be off the rails.

From there, it appears that Ben will frantically search for Jordan, who will have David with her. It should make for some scary moments, and according to Days of Our Lives spoilers, Ben will return with David in tow, but not Jordan. That will, of course, raise some eyebrows, but it doesn’t appear that Ben will have encountered Jordan, as later Days spoilers indicate that Ben will fear that he’s going to have to kill Jordan. That indicates that Jordan will continue to be a threat going forward.

We should also note that Ben will fear that he’s going to have to kill Jordan on the episode airing on Thursday, November 7, which is one episode before the time jump is scheduled to take place. As you probably know by now, DOOL plans to advance storylines by one year on the episode airing on Friday, November 8th. And on the 8th, DOOL spoilers say that Ben will make a horrific discovery.

That’s a lot to process, but what it could mean is that something big (and possibly tragic) is going to happen to Jordan…shortly after Ben is contemplating killing her. Days of Our Lives spoilers (courtesy of Jason47’s Facebook page) indicate that two main characters won’t survive the time jump, so all of this put together indicates that Jordan could be one of those two people. And since we also know that someone will be in prison during the time jump, it could wind up being Ben!

Of course, if that’s the case then it could mean that Ben gets falsely accused and convicted of Jordan’s murder. Given that the spoilers say that Ben makes a horrific discovery, it doesn’t sound like he’d actually be the person who did the killing, but you never know. TPTB have promised a shocking and eventful episode on Friday, November 8, so anything could happen here!

Do you think that Ben will seriously consider killing his sister? Stay tuned to DOOL and don’t forget to check CDL often for the latest Days of Our Lives spoilers, updates, and news.