BY Heather Hughes on May 29, 2019 | Comments: 4 comments
Related : Days of Our Lives, Soap Opera, Spoiler, Television 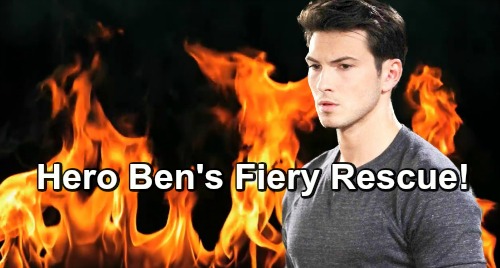 Days of Our Lives (DOOL) spoilers tease that Claire Brady (Olivia Rose Keegan) will really start to worry next week. She’ll feel backed into a corner as Ben Weston (Robert Scott Wilson) digs for answers about the cabin fire. Ben will be convinced that Claire’s to blame, but he won’t have proof. He’ll be frustrated as he continues to face accusations while Claire gets off scot-free.

Claire may cling to the lack of evidence as she tries to remain calm. She’ll probably tell herself that Ben won’t get confirmation on anything. Nevertheless, Days spoilers say a hypnosis session with Dr. Marlena Evans (Deidre Hall) will bring a clue. Ben will recall hearing a ringtone near the site of the fire, so he’ll store that new memory away until it clicks later.

Meanwhile, Days of Our Lives spoilers state that a misunderstanding will put Claire at the Horton cabin. She’ll believe Tripp Dalton (Lucas Adams) is running away with Haley Chen (Thia Megia), so she’ll completely snap. Claire will lose all control as she tries to take out her ex and the woman she believes broke them up.

In reality, Claire sabotaged herself by trusting Eve Deveraux (Kassie DePaiva) and handing over that recording. It looks like she could sabotage herself in the arsonist storyline, too. After all, Ben’s got nothing here. Even with the ringtone memory, it’s not like Ben can prove Claire was there that night.

Eve could easily dismiss Ben’s claim as a lie to save himself or argue that someone else must’ve had the same ringtone. However, a repeat blaze could seal Claire’s fate! Days of Our Lives spoilers say Ben will have a stunning realization on June 4. That’ll bring a desperate hunt for Claire on June 5, which is the same day she’ll plot Haley and Tripp’s fiery murders.

DOOL may put Ben in hero mode once again. Of course, JJ Deveraux (Casey Moss) will likely be part of the rescue drama as well. This is the perfect opportunity for JJ to save Haley and continue to make up for his betrayal. Haley has forgiven JJ, but it would still be nice if he could save her life and truly pay the debt.

Days spoilers say some exciting scenes are coming up. We’ll give you updates as other DOOL news emerges. Stay tuned to the NBC soap and don’t forget to check CDL often for the latest Days of Our Lives spoilers, updates and news.