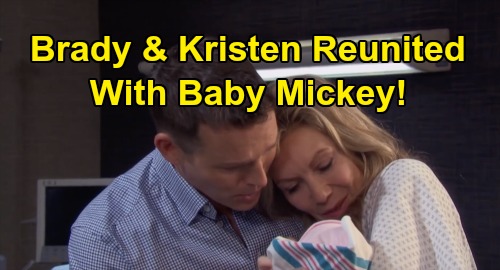 Days of Our Lives (DOOL) spoilers tease that Brady Black (Eric Martsolf) may be forced to reexamine his future with Kristen DiMera (Stacy Haiduk). Things fell apart due to the death of their baby as well as Kristen’s alleged murder of Haley Chen (Thia Megia) – at least that’s what JJ Deveraux (Casey Moss) thinks it was. The cops couldn’t prove it was anything other than the accident Kristen pointed to.

It’s possible that Haley really did fall down that flight of stairs accidentally. Kristen seemed like she was genuinely trying to turn things around and be a good person for Brady. Of course, anything can happen in the heat of the moment – especially when it comes to Kristen. She’s known for having a hot temper and can be vicious at times, but Haley’s murder just doesn’t fit with her current character trajectory. Kristen is currently somber, supportive and kind at the convent.

However, it doesn’t really matter if Kristen’s guilty or not. She’s done plenty of horrible things to Brady’s loved ones, but he was able to forgive her and get past them. Kristen pointed out that Brady stood by her after they buried their child and even when it looked like the DA was going to press charges. She ultimately felt Brady was just going through the motions and decided to leave.

That suggests there’s still some love in Brady’s heart – love that could come bursting through if they find out their baby actually survived. It’s easy to imagine a heartfelt reunion soon after that shocker. Days of Our Lives spoilers say there’s a good chance the babies were indeed switched. Mackenzie “Mickey” Horton is almost certainly the child Brady and Kristen think they lost.

No matter how that Days bomb finally drops, it should be welcome news for this previously devastated mom and dad. Kristen and Brady will likely get a miracle they never expected. Will that lead to a “Bristen” family reunion? They seem poised to find their happy ending – at least until the next DOOL storyline comes along and turns things upside down again.