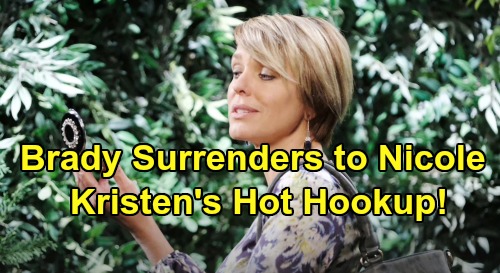 Days of Our Lives (DOOL) spoilers tease that “Nicole Walker” (Stacy Haiduk) will finally get her way. She’s been working hard in her plot to win Brady Black (Eric Martsolf) over, but he’s constantly shutting down her advances. Brady can’t bear the thought of causing more friction with Eric Brady (Greg Vaughan). He just feels like it’s time to get off this merry-go-round once and for all.

Of course, Kristen DiMera (Stacy Haiduk) is growing increasingly frustrated since she really thought this plan would work. She wants to take over DiMera Enterprises, but this whole scheme was really for Brady. Kristen wants love more than anything else. Days of Our Lives spoilers say Kristen will do her best to be patient. That won’t be easy since patience has never been Kristen’s forte!

It won’t be long until “Nicole’s” making another move. DOOL spoilers hint that she won’t be able to resist trying again and again. “Nicole” will feel like she’s bound to wear Brady down eventually – and she’ll be right. It’ll just take a confrontation with Eric first. Days spoilers state that the brothers will get into an argument, which will bring some pretty harsh words from Eric.

It seems Brady will realize they’re doomed to feud no matter what, so he might as well go after what he wants. Brady’s feelings for “Nicole” are indeed resurfacing. Despite the fact that “Nicole” isn’t acting like herself, Brady believes it’s her and feels a strong connection. He’ll be unable to resist “Nicole’s” pull, so he’ll finally surrender to temptation.

It sounds like “Nicole” will convince Brady to sleep with her. The experience shouldn’t raise any red flags since Kristen claims she had some “modifications” to ensure Brady wouldn’t notice. That’s commitment! How will Brady feel after they do the deed? Will he have regrets or will he admit this feels right?

Either way, Days of Our Lives spoilers say Kristen will hope she’s got Brady hooked. Step one was getting Brady to fall for “Nicole” again. Step two will be revealing her true self when the time is right – although we can’t even imagine when that might be. When’s the right time to tell your love interest that you faked a child’s death and have been masquerading as his other ex?!

Days spoilers state that Kristen will face a seemingly impossible task, but she’ll be brimming with confidence. We’ll give you updates as other news comes in. Stay tuned to DOOL and don’t forget to check CDL often for the latest Days of Our Lives spoilers, updates and news.