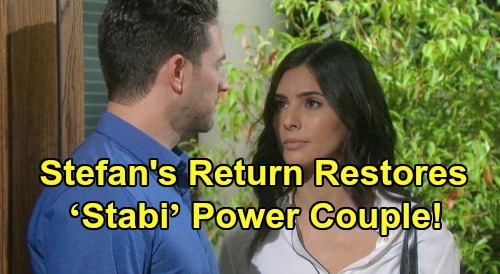 Days of Our Lives (DOOL) spoilers tease that Chad DiMera (Billy Flynn) and Gabi DiMera (Camila Banus) are headed for an all-out war. DOOL fans know Chad’s scheming to regain control of DiMera Enterprises and take Gabi down. He still resents Gabi for her revenge plot on Abigail DiMera (Kate Mansi), so he’s ready to carry out one of his own. Of course, Chad’s growing a bit frustrated with his secret weapon!

When Chad went to meet with Stefano DiMera (last played by the late Joseph Mascolo), Dr. Wilhelm Rolf (William Utay) was waiting instead. He urged Chad to be patient and let his father handle things his own way. Days of Our Lives spoilers say Chad won’t be willing to wait around while Stefano plot his next move. He’ll put a plan in motion during the week of December 2-6 and hope it gets him what he wants.

That plan will take Chad to Rome, so Eli Grant (Lamon Archey) won’t be far behind. Eli is Gabi’s boyfriend and her head of security, which gives two great reasons to protect her. However, Eli could get distracted after he bumps into Lani Price (Sal Stowers). Days of Our Lives spoilers say Eli will be stunned by his encounter with Lani, who’s living in Rome as a nun.

Will that distraction give Chad the upper hand? Time will tell, but it’s clear that Chad’s on a serious mission here. He’ll stop at nothing to make sure Gabi pays the price – and he could have some extra help eventually. There’s a good chance Eli will double cross Gabi once he inevitably learns the truth about the pacemaker plot.

Even so, Days spoilers say Gabi will put up a fierce fight for control of the company. She’ll be desperate to hang onto her last remaining link to Stefano DiMera (Brandon Barash). Gabi hoped to run DiMera Enterprises the way Stefano would’ve wanted. He could be pretty ruthless when he wanted to be, which is why he was such a perfect match with Gabi. They really understood what made each other tick.

Nevertheless, Gabi will be on her own for now. Who do you think should win this DiMera battle? Are you rooting for Chad or Gabi? If Gabi loses, perhaps Stefan will reclaim the throne after his eventual return! They make the ideal Salem power couple, so “Stabi’s” reunion is something many of us are eager to see. We’ll give you updates as other Days news comes in. Stay tuned to DOOL and don’t forget to check CDL often for the latest Days of Our Lives spoilers, updates and news.