BY hellodrdavis on May 12, 2019 | Comments: one comment
Related : Days of Our Lives, Soap Opera, Spoiler, Television 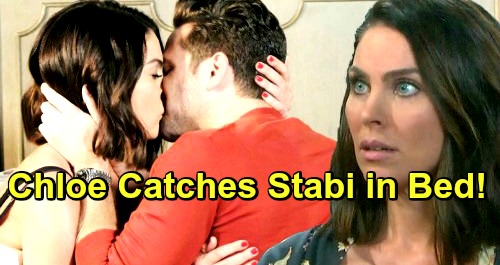 Days of Our Lives (DOOL) spoilers tease that Stefan DiMera (Brandon Barash) is going to be in a real predicament. He has been after Chloe Lane (Nadia Bjorlin) for weeks now, protecting her from the cartel and wooing her as best he can. Stefan may not admit it to himself, but he was really hoping that Chloe could provide him with the family life that he so badly wants.

But a big complication arose for Stefan. Gabi Hernandez (Camila Banus), with a bit of prompting from Brady Black (Eric Martsolf), decided that she was going to seduce Stefan in order to eventually marry him and take him for everything he’s worth. Turns out, it wasn’t that difficult for Gabi to tempt Stefan, and the two have hopped in bed together on several occasions.

Stefan’s flings with Gabi have continued even as he’s been wooing Chloe, and throughout Chloe’s mourning over the “death” of Holly Jonas (Harlow and Scarlett Mallory). It’s been a recipe for disaster, but Stefan has managed to spend time comforting Chloe while also sleeping with Gabi on the side.

But soon, Stefan’s actions are going to catch up with him. He’s already had a couple of close calls where he was almost caught in a compromising position with Gabi, but soon he’ll be caught for real. According to Days of Our Lives spoilers, Chloe will catch Stefan in bed with Gabi. There really won’t be any way that Stefan can explain away being in bed with someone else, and it should be a very bad scene.

Of course, for Chloe, finding Stefan and Gabi will be horrifying. She’ll probably realize that the two have been sleeping together throughout her involvement with Stefan, including when Stefan was comforting her after Holly’s “death.” That should be a total deal-breaker for Chloe, and since she really has no reason to keep living at Stefan’s, she’ll probably be out of there in a flash.

It should be interesting to watch the scene unfold once Chloe makes her big discovery. Of course, it will probably make things a bit easier on Gabi, since Chloe will likely be out of the picture now. Perhaps that will escalate Gabi’s plan to become Mrs. Stefan DiMera, and we’ll see her become queen of the DiMera mansion sooner rather than later!

Will you be sad to see Chloe and Stefan’s blossoming relationship come to a sudden end? Stay tuned to DOOL and don’t forget to check CDL often for the latest Days of Our Lives spoilers, updates, and news.