BY hellodrdavis on June 30, 2019 | Comments: one comment
Related : Days of Our Lives, Soap Opera, Spoiler, Television 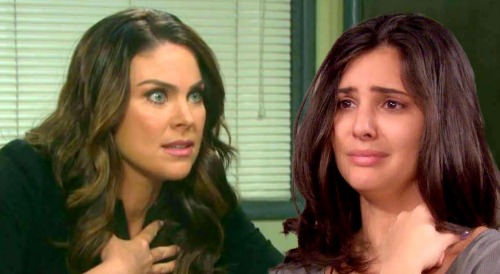 Days of Our Lives (DOOL) spoilers tease that Chloe Lane (Nadia Bjorlin) will soon get some shocking news. As DOOL viewers remember, Chloe was hurt and angry after she caught Stefan DiMera (Brandon Barash) in bed with Gabi Hernandez (Camila Banus). Gabi set up the scene so that Chloe would walk in on her with Stefan, and the plan worked perfectly because Chloe promptly dumped Stefan.

And that played right into Gabi’s hand. Gabi’s big plan is to seduce Stefan, get him to fall in love with her, and then ultimately take him for every cent that he’s worth. Gabi wants revenge because Stefan helped get her sent to prison for Andre DiMera’s (Thaao Penghlis) murder, and she’d love to see Stefan suffer for that.

But Gabi’s plan is dependent on Stefan not finding out about what she’s up to. She needs Stefan to genuinely fall for her and learn to trust her, so that he’ll eventually ask her to marry him. But she might not get too far with her plan thanks to Brady Black (Eric Martsolf) and Chloe.

DOOL viewers will remember that Brady is privy to Gabi’s plot to destroy Stefan. In fact, he was once in on the plan with Gabi and actually orchestrated the whole thing to begin with. But then he dropped out of the plan and Gabi kept on going solo.

Well, according to Days of Our Lives spoilers, Brady will soon spill the beans about Gabi’s plan to Chloe, which should be interesting. After all, Chloe isn’t Stefan’s biggest fan right now since she caught him in bed with Gabi. But she probably also won’t approve of Gabi’s plot to take him down.

We can probably expect to see Chloe hem and haw a little bit about what to do with her newfound knowledge about Gabi’s plan. She could tell Stefan, or perhaps she’ll decide to confront Gabi about it instead. That would be an interesting conversation for sure.

Of course, the other interesting wrinkle in this whole scenario is that Gabi seems to be actually falling for Stefan. So while Gabi is crossing over from running a big con to falling in love, Chloe will be gaining serious ammunition against her that could blow up any shot she had with Stefan. Gabi could easily wind up the big loser in this scenario if Chloe decides to spill the truth to Stefan!

What do you think Chloe will do? Will she decide to tell Stefan about what Gabi’s plot, or will she just stay out of it? Stay tuned to DOOL and don’t forget to check CDL often for the latest Days of Our Lives spoilers, updates, and news