Days of Our Lives Spoilers: Claire Forced To Move Out Of Loft – Furious As Haley & Tripp Get Closer

BY hellodrdavis on April 22, 2019 | Comments: one comment
Related : Days of Our Lives, Soap Opera, Spoiler, Television 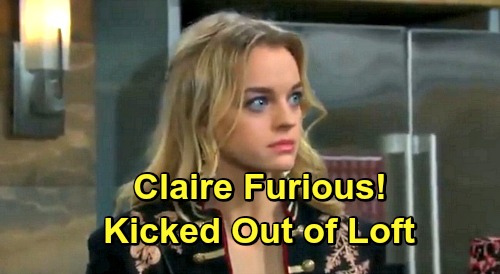 Days of Our Lives (DOOL) spoilers tease that Claire Brady (Olivia Rose Keegan) will soon be at her wit’s end. Things haven’t exactly been going Claire’s way lately. After all, her boyfriend Tripp Dalton (Lucas Adams) got married to Haley Chen (Thia Megia) in order to keep her in the country legally. And even though they expected the marriage to end any question over whether Haley could stay in the US, it doesn’t look like that will be the case.

The ICE officer who is overseeing Haley’s immigration case seems determined to prove that her marriage to Tripp is a fraud, so Haley and Tripp are really going to have to keep up appearances. According to Days of Our Lives spoilers, they’ll have some difficulty on this front. It appears that the ICE agent will give them a hard time going forward, and they’ll really feel her scrutiny.

In fact, it looks like Haley and Tripp’s living arrangements will be questioned at some point. Of course, right now Claire, Tripp, Haley, and Ciara Brady (Victoria Konefal) all live in the loft together, with Tripp and Haley supposedly living there as a married couple. That’s not exactly the typical living situation for happily married newlyweds.

Plus, newlyweds generally don’t live in the same dwelling with an ex of one of the spouses. According to Days of Our Lives spoilers, Claire will soon be forced to leave the loft so that her presence doesn’t lead anyone to question the validity of Tripp and Haley’s marriage. This will surely send Claire into a rage, as she wants to be near Tripp 24/7 and make sure that he and Haley don’t start to get close.

DOOL spoilers say that Claire is already worried that Tripp will start to have feelings for Haley, and really the only consolation for Claire was that she’d be able to be around them constantly to make sure that Tripp doesn’t forget about her. But now that Claire will be living elsewhere, she won’t be able to keep a watchful eye on her man.

It will be interesting to see where Claire ends up living. She might wind up at The Brady Pub with Roman Brady (Josh Taylor), or perhaps she’ll land at the Salem Inn alongside Eve Deveraux (Kassie DePaiva) and Jack Deveraux (Matthew Ashford). But one thing’s for sure – she’s going to be on edge even more than usual now that she’ll be separated from Tripp and worried about Haley getting her claws in him.

Do you think that Claire should be worried about Tripp and Haley getting closer? Stay tuned to DOOL and don’t forget to check CDL often for the latest Days of Our Lives spoilers, updates, and news.