BY hellodrdavis on February 23, 2019 | Comments: one comment
Related : Days of Our Lives, Soap Opera, Spoiler, Television 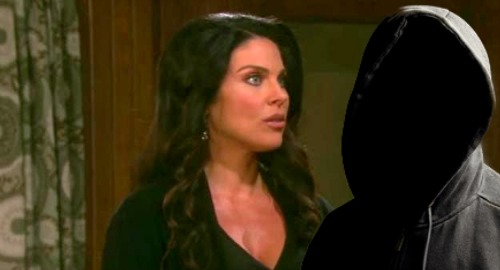 Days of Our Lives (DOOL) spoilers tease that Chloe Lane (Nadia Bjorlin) will get a shock. She recently moved in with Stefan DiMera (Tyler Christopher) as a means of protection from El Fideo’s (Andoni Gracia) men, who seem determined to retaliate against her for his death. It has helped Chloe to feel safer, but soon some events are going to transpire that make Chloe fear for her safety all over again.

First off, Chloe will be alarmed to discover that someone is watching her. Of course, Chloe may be safe in the evenings when she goes home to the DiMera mansion, but during the days when she’s at work, she’s vulnerable. It looks like she’ll get that feeling that she’s being watched, and Days spoilers say that she’ll find some evidence that someone’s been watching her. She’ll be unnerved, to say the least.

But that won’t be all. Days spoilers say that Rex Brady (Kyle Lowder) will have a run-in with a man with a gun who appears to be following Chloe. It doesn’t look like Rex will get any answers out of the man, but it will be enough to seriously worry him for Chloe’s safety.

So, who could be stalking Chloe, and why? Sure, it could be some more of El Fideo’s men, but wouldn’t his men just come right out and try to kill Chloe if it were them? Why would they need to sneak around and stalk her in the process? Perhaps there is someone else who is keeping an eye on Chloe for some reason.

Of course, it could be that Stefan or Brady Black (Eric Martsolf) is having a secret security detail trail Chloe. That could explain her feeling of being watched and a man with a gun following her. But it might be something more sinister, like a fan of Chloe’s opera singing who has taken his obsession too far.

Who do you think is stalking Chloe? Stay tuned to DOOL and don’t forget to check CDL often for the latest Days of Our Lives spoilers, updates, and news.