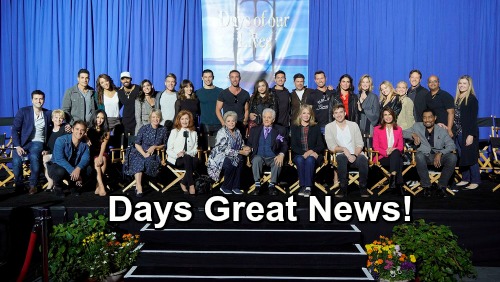 Days of Our Lives (DOOL) spoilers tease that even more exciting storylines will have a chance to play out in Salem. According to TVLine, Days of Our Lives has been renewed for its 55th season. That’s quite an accomplishment and it’s certainly the news that DOOL fans have been hoping for.

Bruce Evans, Executive Vice President of Current Programming for NBC Entertainment, issued a statement with updates on the decision. “With writing that manages to weave together Salem’s iconic characters with current realities, [executive producer] Ken Corday and his team have ushered the show’s legacy into a new era that resonates with both longtime and new viewers,” Evans said.

It’s safe to say Evans is right about that. There have been a few complaints along the way, but most Days of Our Lives viewers seemed pleased about the direction of the show. Since Ron Carlivati took over as DOOL’s head writer, he’s done an excellent job of featuring both soap vets and younger actors to keep Days fresh. He also features families in a lot of storylines, which is a plus.

Carlivati avoided overloading the canvas with new characters, too. He used the people we already loved, which earned the seal of approval from many Days watchers. Naturally, there have been some departures here and there. That couldn’t be helped since some actors either left to pursue other projects or walked away over contract disputes.

However, things are going well at Days overall. It’d be nice to see the ratings climb a bit more, but the show apparently felt confident enough to go ahead and renew. We didn’t even have to endure any nail-biting moments! This news was just a pleasant surprise, so Days fans everywhere are celebrating.

Ken Corday is excited about the opportunity to give viewers more of what they want. He said, “It’s a great day in Salem! The sands in the hourglass will continue to flow for yet another year. We’re grateful to NBC and Sony for their continued support of the show and, of course, to our dedicated and passionate fans, we owe it all to you.”