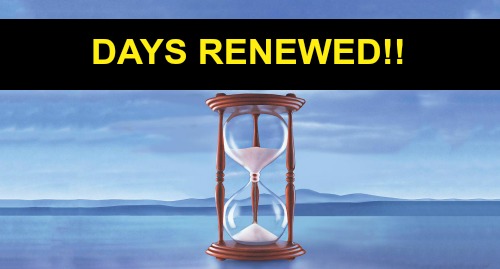 Days of Our Lives (DOOL) spoilers reveal that fans have something to celebrate. You’ve probably heard about DOOL’s upcoming hiatus, which is kicking off as November wraps up. Some sites used that hiatus to suggest the end was near for the NBC soap, but that was never the plan. This hiatus is just about cutting down their several-months-in-advance filming schedule.

Now we know for sure the sands will keep running through the hourglass. According to Deadline, Days of Our Lives has been renewed for season 56. Their sources insist that although the deal isn’t completely done, it was close enough to go ahead and announce to the cast. Executive Producer Ken Corday reportedly filled everyone in, so we can imagine they were just as happy as Days viewers are!

On Twitter, many DOOL fans were eager to spread the word and express their excitement. One Days watcher tweeted, “YESSSSSSSSSS! Now can all those stupid reports about Days being cancelled stop.” Another one said, “So happy to hear #Days has been renewed! Hope the same mainstream media outlets that acted like the show was done will report on this great news!”

Of course, there were plenty of other tweets and posts with congratulatory messages. The Young and the Restless’ Twitter account sent out their congrats as well, so it’s nice to see soaps supporting each other. It’s important to keep this genre going strong! We need all four remaining daytime dramas to stay on the air and keep delivering gripping stories.

Days of Our Lives will thankfully have the chance thanks to this renewal, which actually came earlier than usual. There’s speculation that the recent reports sped things along. People were concerned when they heard all DOOL actors were released from their contracts, but that certainly never meant a renewal wouldn’t happen. The show just couldn’t afford to pay everybody when they weren’t actually working.

It’s nice that we can all just put the issue to rest and look forward to more hot storylines. Days of Our Lives spoilers say some major twists and turns are on the way, so don’t miss all the action. We’ll give you updates as other Days news comes in. Stick with the NBC soap and don’t forget to check CDL often for the latest Days of Our Lives spoilers, updates and news.