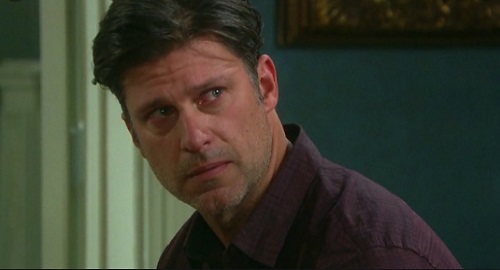 Days of Our Lives (DOOL) spoilers tease that Nicole Walker’s (Arianne Zucker) mistake could come back to haunt her. After deciding to keep Sarah Horton’s (Linsey Godfrey) pregnancy a secret, Nicole will struggle over the next few weeks. There’ll be some close calls as Nicole nearly drops the baby bomb. She’ll be tempted to fill Eric Brady (Greg Vaughan) in and eliminate this dark cloud hanging over them.

Nicole’s kept secrets from Eric before – like when she withheld evidence that would’ve cleared his name. Eric was suspended from his priestly duties after Kristen DiMera (Stacy Haiduk) drugged him into sleeping with her. The video was played right there in St. Luke’s, which blew up Kristen and Brady Black’s (Eric Martsolf) wedding.

Nicole shredded the documents that confirmed Eric was innocent and would’ve allowed him to return to the priesthood. She didn’t want to lose her shot with Eric, so Nicole opted to stay quiet. Naturally, it blew up in her face. Nicole’s tackling a familiar situation now since coming clean could cost her Eric, but keeping her mouth shut could make matters worse.

It’s especially bad since Eric’s already been burned in the secret department. He’s going to be furious when he finds out Nicole knew about the pregnancy and kept it under wraps, especially since Xander Cook (Paul Telfer) is involved. DOOL fans will recall they’ve both got a twisted history with the guy.

Of course, Days spoilers state that Nicole will use Xander as her excuse. She’ll point out that Xander’s proven to be incredibly dangerous. Xander nearly killed Eric and Nicole more than once! Nicole’s got a young daughter to protect so she may contend that she had to put Holly Jonas (Harlow and Scarlett Mallory) first.

However, Days of Our Lives spoilers say this could tear “Ericole” apart. These two just never stay happy for long! There’s a good chance Nicole’s secret will blow up after the time jump and destroy her fairytale romance. If Xander’s won Sarah’s heart by then, this could mess up things for him, too.

Will Nicole sabotage herself by hiding Sarah’s pregnancy? Will Eric and Sarah’s child ultimately bring them closer together? Days of Our Lives spoilers say Nicole will hold out hope for a future with Eric. She may get her wish, but it’ll undoubtedly take time and patience.

It sounds like some big romantic developments are ahead in Salem. We’ll give you updates as other Days news comes in. Stay tuned to DOOL and don’t forget to check CDL often for the latest Days of Our Lives spoilers, updates and news.