BY hellodrdavis on November 23, 2019 | Comments: one comment
Related : Days of Our Lives, Soap Opera, Spoiler, Television 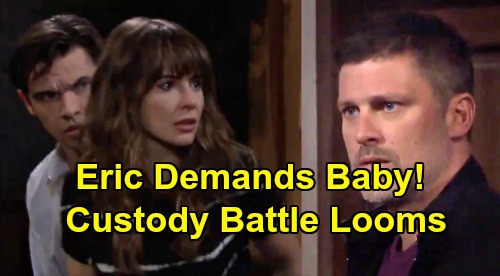 Days of Our Lives (DOOL) spoilers tease that Eric Brady (Greg Vaughan) will get a big shock. As DOOL viewers know, he’s been operating under the belief that Sarah Horton’s (Linsey Godfrey) baby belongs to Xander Kiriakis (Paul Telfer)…for over a year. He seemed to accept Sarah’s word that the baby was Xander’s back when she was pregnant and apparently he didn’t push for a paternity test. But he’s about to find out the truth – that Mickey is his daughter.

And that news is going to come from his true love, Nicole Walker (Arianne Zucker), who will decide that the guilt of knowing about the paternity secret is too much to bear. Faced with Eric asking her to marry him, DOOL spoilers say that Nicole will break down and tell Eric that he’s Mickey’s father.

Of course, this will come at a very difficult time, since Mickey has been kidnapped and is currently missing. The good news here is that Mickey will be returned to Sarah and Xander unharmed, but it seems that as soon as she is back safely in Sarah’s arms, Sarah will have to face a new situation – that of Eric demanding that Xander back off and relinquish his daughter to him.

As DOOL viewers know, Eric detests Xander and he’s never liked the idea of Sarah and Xander being together as friends or anything else. He thinks that Xander is a common criminal and he resents how Xander kept Nicole and Holly Jonas (Harlow & Scarlett Mallory) away from him for so long.

But once Eric finds out that he’s Mickey’s father, he’s going to have some strong feelings about Xander being anywhere near his daughter. And that’s going to cause a huge problem, since Mickey has bonded with Xander and vice versa. Xander truly loves Mickey and won’t want to give up having a fatherly role toward her. And that’s going to rub Eric the wrong way.

Eric will also probably be furious with Sarah for keeping him from his daughter for so long, and for allowing the likes of Xander to be a father to Mickey. Now that Eric knows he’s Mickey’s father, he might demand that Sarah cut Xander out of Mickey’s life for good. Sarah might not want to do that, given how great Xander has been with Mickey. Plus, Xander and Sarah have become close themselves.

One wonders just how far Eric will go to protect Mickey from Xander. Might he seek custody of Mickey? He just proposed to Nicole, and although they have a lot to work through right now, he might argue in court that he and Nicole would provide a more stable home than Sarah and Xander would, especially given Xander’s criminal history.

Could we see a custody battle looming here? Would Eric go that far in order to keep Xander away from his daughter? We’ll see where this all leads, but in the heat of his anger, Eric may decide that he’d go to these lengths to keep his daughter safe…especially if he finds out that Xander is the reason that Mickey got kidnapped in the first place.

What do you think? Could we be looking at a custody battle between Eric and Sarah? Stay tuned to DOOL and don’t forget to check CDL often for the latest Days of Our Lives spoilers, updates, and news.