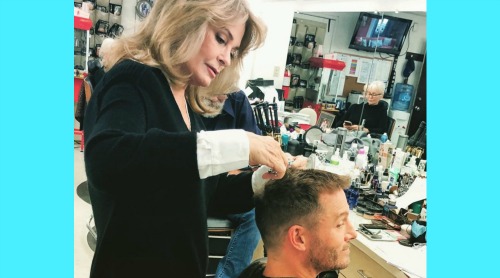 Fortunately, things always look pretty lighthearted on set with the cast and crew. The Days family seems like a close-knit group. On Instagram, Martsolf offered a little glimpse of daily life at the studio. He posted a picture of himself getting a haircut by Deidre Hall in the hair and makeup room. Martsolf sported as smile as Hall took a little off the top for him. It was cute moment that’s definitely worth sharing.

“Sometimes your TV Mom gives you a trim,” Martsolf said. Of course, Marlena is technically Brady’s stepmom, but she’s always been his mother figure. Brady’s biological mom, Isabella Toscano Black (Staci Greason), died of pancreatic cancer when he was just an infant. Thankfully, Marlena stepped up and Brady acknowledged her role in his life during her last near-death experience.

Hall seems to have a nice working relationship with many of her costars, including Martsolf and her other TV son, Greg Vaughan (Eric Brady). After Martsolf shared this pic, a current costar chimed in along with a former one. Kate Mansi (Abigail DiMera) gushed, “This is precious !!!!!!” She was clearly thrilled to see Hall and Martsolf’s hair care bonding.

As for what’s next in Salem, Days of Our Lives spoilers say Brady will have to deal with the truth about Nicole. He had no idea it was Kristen in a mask, so this is a complex situation that’ll bring some tough emotions. Brady may struggle with Kristen desires despite her horrible scheme. He may also feel disappointed that his fresh start with Nicole was never a real thing.