Days of Our Lives Spoilers: Eric Plays the Hero, Follows Clues to Find Alive Holly – Reunites Nicole with Her Daughter?

BY Heather Hughes on May 8, 2019 | Comments: 2 comments
Related : Days of Our Lives, Soap Opera, Spoiler, Television 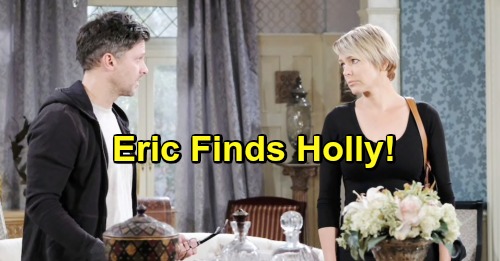 Days of Our Lives (DOOL) spoilers tease that Nicole Walker’s (Arianne Zucker) devastation will leave her in a dark place. She’ll struggle to climb out of this grief pit despite Eric Brady’s (Greg Vaughan) attempts to help. Dealing with the loss of Holly Jonas (Harlow and Scarlett Mallory) will continue to be an agonizing ordeal. Nicole will barely know how to put one foot in front of the other, but she’ll have to carry on.

DOOL fans can expect Eric to keep trying, but Nicole will push him away time and time again. Instead, she’ll choose to pull Brady Black (Eric Martsolf) closer. Poor Eric will have to face losing both Holly and Nicole – just in different ways. His dreams of a happy family will be dashed, so he’ll have a hard time moving forward, too.

Eric truly wanted custody of Holly and nearly went to court over it, but he finally backed down under pressure. He decided Holly should be with Chloe Lane (Nadia Bjorlin) and her big brother, Parker Jonas (Christian Ganiere). It was probably the right call, but it doesn’t seem that way to Nicole. She believes the drug cartel is behind her daughter’s kidnapping and death, so that’s complicating things.

The truth is Holly is alive and has been sent off to her new home. Xander Cook (Paul Telfer) confirmed that to Ted Laurent (Gilles Marini), but how will the truth come out? Someone has to play the hero here, so who’s it going to be? Days of Our Lives spoilers say Eric will need a way to win Nicole back, so this might be just the ticket.

Since Eric failed to protect Holly, Nicole’s going to blame him until something changes. Of course, that something would be bringing Holly back from the dead. Nicole has no idea that’s an option and Eric doesn’t either – at least not yet. However, Days spoilers state that Xander will stir up trouble in town soon. He might drop a hint for Eric to pick up on or inadvertently leave some trail for Eric to follow.

If not, it could be Ted who cracks and spills something. Regardless, Days of Our Lives spoilers say Eric may have a chance to step up and make this right. Will he discover some clues and figure out that Holly’s still out there somewhere? Will Eric be the one to reunite Nicole with her daughter?

Let’s hope Eric can ease the tension with a heroic adventure down the road. We’ll give you updates as other Days news comes in. Stay tuned to DOOL and don’t forget to check CDL often for the latest Days of Our Lives spoilers, updates and news.