BY hellodrdavis on May 13, 2019 | Comments: 2 comments
Related : Days of Our Lives, Soap Opera, Spoiler, Television 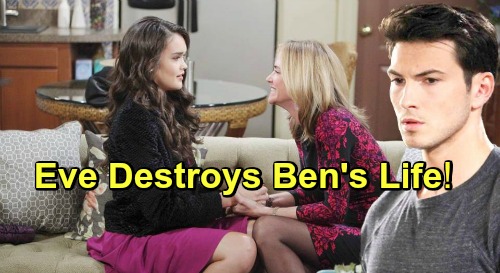 Days of Our Lives (DOOL) spoilers tease that Eve Deveraux (Kassie DePaiva) will soon set out on a new mission. She’s had a lot on her plate lately, with helping Claire Brady (Olivia Rose Keegan) get rid of Haley Chen (Thia Megia) and making sure that her husband is elected mayor of Salem. But soon, Jack Deveraux (Matthew Ashford) will be named mayor and Eve will be able to take a breath and regroup for the future.

The new first lady of Salem will probably have many goals and causes to promote in her new role, but according to DOOL spoilers, she’ll have one thing on the top of her list: make Ben Weston’s (Robert Scott Wilson) life miserable. It’s been a while since Eve has thought about Ben, but soon her attention will turn back to the reformed serial killer.

DOOL viewers will remember that Ben killed Eve’s daughter Paige Larson (True O’Brien), and naturally Eve has never gotten over that. Last year, when Ben first came back to Salem after being released from Bayview, she physically attacked and tried to kill him. Suffice it to say, she’s got a lot of pent-up rage directed toward Ben.

At one point, Eve even expressed interest in framing Ben for the cabin fire that Claire started. That fire nearly killed Ciara Brady (Victoria Konefal) and if she were to successfully frame Ben for it, it would mean attempted murder charges, which could put Ben away for a very long time if he were convicted.

Well, it seems that Eve will once again become consumed with getting revenge on Ben. Specifically, Days of Our Lives spoilers say that she’ll become determined to punish Ben. Exactly what leads her to target Ben again remains to be seen, but she might just catch a glimpse of him happy and enjoying life with Ciara and decide that he shouldn’t have it so good.

Eve might decide that Ben shouldn’t be enjoying the good life while Paige suffered at his hands and isn’t here anymore. Whatever fuels her ire, Eve will apparently make it her new mission to bring Ben down. Whether that means trying once again to frame him for Claire’s cabin fire or something else, it looks like she’s going to go after him hard.

And now Eve will have a public voice, since she’ll be the mayor’s wife. She might lead a public charge against Ben or otherwise use the power of her husband’s new office to go after him. Time will tell exactly what she does, but Ben had better watch out, because Eve is pretty devious and conniving when she wants to be.

Of course, this will all be happening at the same time that Ben and Ciara will be teaming up to find out who really set the cabin fire. They’ll find themselves getting more and more suspicious of Claire, but might Eve end up doing something to throw them off the trail?

Do you think that Eve will succeed in punishing Ben for what he did to her daughter? Stay tuned to DOOL and don’t forget to check CDL often for the latest Days of Our Lives spoilers, updates, and news.