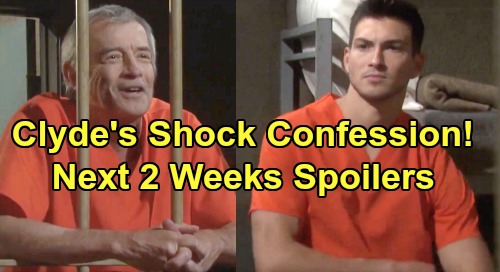 Days of Our Lives (DOOL) spoilers for the next two weeks tease that some major revelations are on the way. During the week of November 11-15, Jennifer Horton (Melissa Reeves) will still be in shock over how long she’s been comatose. Jack Deveraux (Matthew Ashford) was amazed when Jennifer finally woke up after a year.

Of course, a LOT happened while Jenn was out of it. Jennifer will have to catch up, but she needs a proper family reunion first. Jack, Abigail DiMera (Kate Mansi) and JJ Deveraux (Casey Moss) will be happy to give her one. Jennifer will be over the moon as she enjoys their time together. Sadly, JJ’s issues will be revealed a bit later. Eric Brady (Greg Vaughan) will have a chat with JJ and determine that he’s high.

Meanwhile, Gabi DiMera (Camila Banus) will worry about a threat that’s returned to town. She’ll suspect Chad DiMera (Billy Flynn) is plotting against her, so she’ll bring Eli Grant (Lamon Archey) up to speed. It looks like Eli and Gabi will be an item, so he’ll be invested in protecting her.

Other Days spoilers say we’ll see that Ciara Brady (Victoria Konefal) is alive and well. Ben Weston (Robert Scott Wilson) actually found someone else’s body when he returned home, and it appears it was his own sister. DOOL fans can probably expect Ben to do time for Jordan Ridgeway’s (Chrishell Hartley) murder. He obviously didn’t kill Jordan, but it seems he’ll land behind bars anyway.

Over with Sarah Horton (Linsey Godfrey), she’ll have a new round of baby drama to tackle. Sarah will have a child, but will it be her own? There’s always a chance some swapping went down off screen. It’s worth mentioning Sarah and Nicole Walker (Arianne Zucker) will face guilt over the secrets they’ll be keeping.

During the week of November 18-22, Sarah and Xander Cook (Paul Telfer) will savor some baby bonding. They’ll have some special moments with the kid, but things will soon take a terrifying turn. Days of Our Lives spoilers say Sarah will freak when her baby vanishes. She’ll frantically fill Xander in on the missing tot, so he’ll want to help.

After telling Victor Kiriakis (John Aniston) she’s through with Ben, Ciara’s actions will tell a different story. It looks she may be secretly plotting to clear Ben’s name. Then again, this could have something to do with Ciara’s suspicions about “Hope Brady” aka Princess Gina (Kristian Alfonso).

Whatever the case, Ciara will end up doing some digging in Xander’s office. While Ciara snoops, Ben will react to a terrible confession from Clyde Weston (James Read). This father and son could have a tense conversation while locked up together.

Over with Kayla Johnson (Mary Beth Evans), she’ll be on cloud nine with the new man in her life. Days spoilers say they’ll reflect on how they became a couple, so fans will be eager to hear this romantic tale. Unfortunately, it could involve a tragic outcome. Days of Our Lives spoilers say Adrienne Kiriakis (Judi Evans) died during the year Jennifer missed, so Justin Kiriakis (Wally Kurth) could be Kayla’s new boyfriend.

Jennifer will get some crushing news as well, so that could certainly line up with Adrienne’s demise. Jenn cares about Adrienne a great deal, which would make her death a difficult blow. Over with Abigail, she’ll catch Eli red-handed. Days of Our Lives spoilers say Abigail will find Eli looking for clues on Chad’s laptop. Eli will be doing it for Gabi’s sake, but you can bet Abigail won’t appreciate it!

Some fantastic episodes are coming up. We’ll give you updates as other Days news emerges. Stay tuned to DOOL and don’t forget to check CDL often for the latest Days of Our Lives spoilers, updates and news.