Days of Our Lives Spoilers: Gabi’s a Mess as Will Demands Vivian Answers – Angry Grandson Wants Truth About Kate’s Shooting 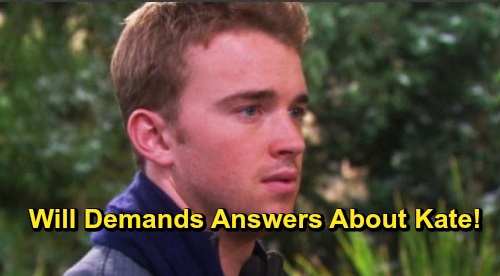 Days of Our Lives (DOOL) spoilers tease that Will Horton (Chandler Massey) will eavesdrop on a shocking conversation. He’ll overhear Vivian Alamain (Robin Strasser) talking to Stefan DiMera (Brandon Barash), so it sounds like Kate DiMera’s (Lauren Koslow) name will come up. Will probably won’t listen in on a full-blown confession, but Vivian may get pretty darn close.

Nevertheless, Will won’t have any proof of Vivian’s actions. He’ll simply have a strong hunch that Vivian’s responsible for Kate’s shooting. If Will wants more info, he’ll have to seek it from someone who might have inside knowledge. Days spoilers say Will will assume Gabi knows what’s up. He’ll turn to Gabi for help during the week of September 23-27, so it’ll he’ll really put her on the hot seat.

DOOL fans can expect a simple question for Gabi, but answering it will be far more complicated. Will’s going to ask if Vivian shot Kate, so that’ll leave Gabi in a bind. Days of Our Lives spoilers say she’ll be conflicted since Will’s grandmother will be dying in a coma. Will is someone Gabi cares about a great deal – both as a friend and as the father of their daughter, Arianna Horton (Harper and Sydnee Udell).

However, Gabi will also want to be loyal to her husband. Stefan just got his mom back and doesn’t want to lose her all over again. He refuses to let Vivian land behind bars, so he’s counting on Gabi to stay tight-lipped. Stefan would be furious if Gabi betrayed him, and that’s something she’ll have to keep in mind. Gabi won’t want to rock the boat in her marriage, even if that means leaving Will with questions.

Perhaps Gabi will lie about not knowing who shot Kate. Regardless, it doesn’t look like Gabi will point the finger at Vivian. Even so, Days of Our Lives spoilers say Gabi’s guilt will rev up. She’ll have to watch as Will and Lucas Horton (Bryan Dattilo) suffer, but it’ll be her turn soon enough. Stefan’s tragic exit is just around the corner.

Some heartbreaking episodes are coming up on the NBC soap. We’ll give you updates as other Days news emerges. Stay tuned to DOOL and don’t forget to check CDL often for the latest Days of Our Lives spoilers, updates and news.