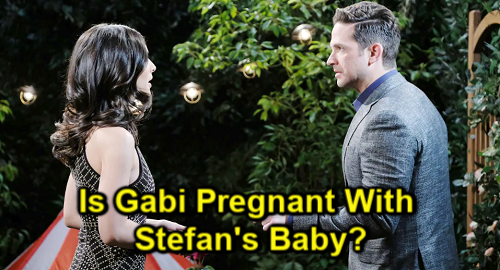 Days of Our Lives (DOOL) spoilers tease that Gabi Hernandez (Camila Banus) will continue her scheme and hope Stefan DiMera (Brandon Barash) falls madly in love with her. It won’t be long until Stefan’s declaring his feelings for Gabi, which she’s clearly developing, too. That was never part of the plan, but it’s something Gabi will have to decide how to deal with in the weeks ahead.

Could Gabi have to deal with another curve-ball as well? Will she end up pregnant by Stefan? Gabi sustained serious injuries in a prison attack and was told she probably couldn’t have any more children. However, plenty of miracle babies have been born in Salem. It’s quite common on Days of Our Lives and might even be used as a way to explain lack of birth control.

This scenario would be pretty perfect since Stefan wants a family more than anything. Days fans will recall Stefan fell hard for Abigail DiMera’s (Kate Mansi) alter, “Gabby.” That obviously wasn’t meant to be since “Gabby” wasn’t even an actual person.

Still, Stefan was crushed when he realized “Gabby” wasn’t coming back to him. He was even more devastated to find out Charlotte DiMera wasn’t his daughter. Gabi was to blame for that blow since she messed with the paternity test, which is another great reason for her to give Stefan a baby now. They’ve certainly been hitting the sheets enough to make it happen!

After Stefan confesses his feelings for Gabi, Days of Our Lives spoilers say they’ll begin dating. A pregnancy could fast-track things to the engagement we know is coming. Will Gabi realize she has a bun in the oven? Gabi hasn’t been sleeping around as far as DOOL viewers know. If she winds up pregnant, Stefan would definitely be the father.

Stefan might realize his dream’s going to come true after all. He could not only be a stepdad to Arianna Horton (Harper and Sydnee Udell) but a dad to his new baby, too. Stefan might determine that the real Gabi is even better than the version Abigail created in her head. He could feel like everything’s coming together for him.

Gabi Hernandez Thrown For A Loop

Gabi would be thrown for a loop over this pregnancy, but at least she’d get what she wants. Stefan would pop the question quickly and Gabi could get this marriage show on the road. It’d just be a matter deciding if she’s willing to alienate her child’s father and set up a nasty divorce. Gabi might let herself surrender to her feelings and accept that this feels right.

Of course, we should also consider the possibility that Gabi might fake a pregnancy. It’d be an easy strategy to set this marriage in motion, so we wouldn’t put it past her! However, many “Stabi” fans would appreciate the real deal, which could lead to Stefan and Gabi becoming a solid power couple.

Will Gabi and Stefan realize they’re truly meant for each other? Can a child bond them in a way nothing else could? Would a baby convince Gabi to drop her revenge plot? We’ll give you updates as other Days news comes in. Stick with DOOL and don’t forget to check CDL often for the latest Days of Our Lives spoilers, updates and news.